'With my darling 'Lullay' to sing'

In the Christmas edition of the Catholic Herald, I've written a short piece about the medieval carol 'Lullay, Myn Lyking' ('I saw a fair maiden'), often heard today in this beautiful setting by Gustav Holst:

Holst wasn't the first to set this medieval text to music, but his setting is very well-loved. In my piece I discuss the link between the carol and the woman in whose book Holst found it, Mary Gertrude Segar - a female Catholic medievalist in the days when such things were rare (not that they're exactly common today). When thinking about the accessibility of medieval English texts like this poem, I'm often struck by the fact that the very audiences for whom they were written were, for a long time, those most directly excluded from the opportunity to read them: think of all those medieval devotional works which were written to be read by Catholic women and men, but which, when they began to be edited in the 19th century, became the property of a scholarly world which neither women nor Catholics were yet allowed to join. The roots of anti-Catholicism in England run deep, and it's a well-known fact that in older scholarship discussion of the medieval church is often profoundly shaped by that prejudice, potently combined with anti-Irish racism, class snobbery, and hostility to Britain's Catholic European neighbours. However much scholarship has (or in some cases hasn't) moved on, that old prejudice has had a wearisome and lasting impact. Many modern popular misconceptions about the practices of the medieval church, whether it's relics, saints, pilgrimage, or beliefs about the church's attitude towards science or Biblical translation, derive in a straight line of descent from 19th- and early 20th-century anti-Catholic polemic - even if they masquerade today as rationalist critique. In that context, all the more reason to remember women like Mary Segar, who must often have encountered such prejudice, and who came to these texts with different eyes.

Some other medieval texts which Holst found in Segar's anthology became his 'Four Songs for Voice and Violin':

I sing of a maiden
That matchless is.
King of all Kings
Was her Son iwis.

He came all so still,
Where His mother was
As dew in April
That falleth on the grass:

He came all so still,
To His mother's bower
As dew in April
That falleth on flower.

He came all so still,
Where His mother lay
As dew in April
That formeth on spray.

Mother and maiden
Was ne'er none but she:
Well may such a lady
God's mother be.

(Segar's modernisation of a 15th-century text)

On a related note, you may also be interested at this season in listening to a recently-uploaded extract from a study-day I led back in the summer, on the subject of 'Mary and the Lives of Medieval Women'. Many medieval artists and writers were deeply interested in exploring Mary's experiences of motherhood, both its joys and its sorrows. In this extract I discuss a number of medieval poems which imagine her feelings at the Annunciation, during her pregnancy, and in the first days after Jesus' birth.

These are poems I've written about before here, and this sweet little 15th-century carol seems particularly fitting with just a few days to go before Christmas:

This ghostly case [holy act]
Doth me embrace,
Without despite or mock,
With my darling
Lullay to sing,
And lovingly him to rock.

Soon must I sing,
With rejoicing,
For the time is all run,
That I shall child,
All undefiled,
The King of heaven's Son."
Posted by Clerk of Oxford at 2:41 pm No comments: 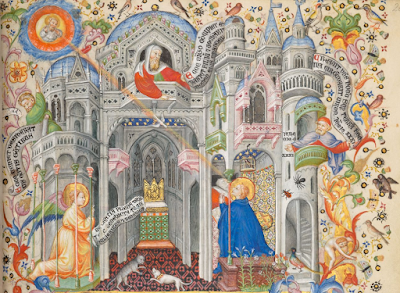 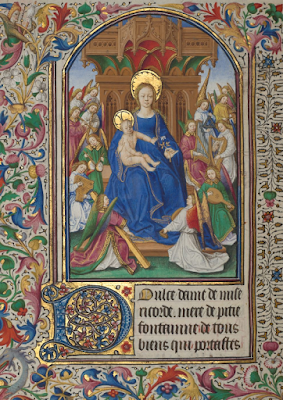