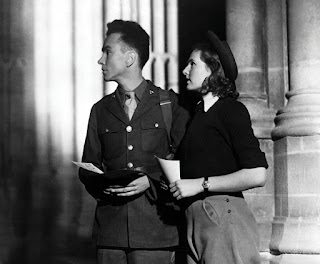 My latest column for History Today can now be read online here. It's about the 1944 Powell and Pressburger film A Canterbury Tale, a strange and wonderful little masterpiece set in wartime Kent. I feel confident that anyone who likes this blog will enjoy it (if you don't know it already!), and at the moment you can watch it in full on Youtube.

I've been very touched since this piece came out to be contacted by people who want to share with me their love of the film and their personal history with it. People have been telling me how they stumbled across it on TV or discovered it unexpectedly through a revival screening, as long ago as the 1970s or just last year; one person wrote to tell me about seeing it as a child when it was first released in 1944. It's a film which seems to inspire a great deal of love, and to hear about that love, to be warmed by it at second-hand, is an unexpected reward for having written about it!

Love draws forth love, and I'm sure that one reason people love this film so dearly is that it's transparently born of love - particularly love for the countryside and the people of the director's own childhood home (Michael Powell was born in Bekesbourne and went to school in Canterbury, and several of the minor characters are directly based on, or played by, local villagers he knew). It's a film about love, of various kinds: love of home and nature, a poignant love for the lost and the absent, and a love of history which manifests itself in an intensely romantic, almost mystical sense of longing and connection with the past. In fact, the whole plot of the film is driven (this is a little bit of a spoiler!) by one character's desire to share his love of history with others. He goes about it in an obsessive and bizarrely coercive way, but the film argues - and itself superbly demonstrates - that the same goal can be achieved by wooing your audience, rather than bullying them: instead of frightening them or chastising them, invite people in to love what you love. There's no love story in this film - one of the things it was criticised for - but the whole thing is a meditation on love and desire in a way few overtly romantic stories manage to be. Its central metaphor is pilgrimage, specifically medieval pilgrimage; and for medieval writers pilgrimage was above all the journey of the questing heart, the outward embodiment of the soul's restless, yearning desire to love and seek after truth.

I first saw this film as a teenager (a good while before I read The Canterbury Tales!), and for me it formed, as much as it now reflects, my interest in all the things I now write about here: pilgrims and medieval poetry and Canterbury and ancient landscapes and all those kinds of things. All those are constants; but every time you return to a work of art you bring something new to it, and watching A Canterbury Tale again this year I was very struck by something I hadn't particularly noticed before. As well as all the kinds of love which the film movingly depicts, there's a spirit of charity about it, which just at the moment feels rare and refreshing. It's a celebration of the old rural world, yes; but it has love and to spare for everyone, and is full of moments where respect works both ways - where people who come from different backgrounds find something in each other to recognise and admire. It's a clash of cultures film in which no one really clashes, or not for very long. Britain and America, city and country, modern and ancient, young and old - the characters who embody these different ways of life are all just quite nice to each other, really, and end up liking each other, the way people do. To me that feels entirely realistic and a reflection of how most people do act, in their ordinary everyday lives, towards strangers they encounter, but to see it celebrated on screen felt surprising. In some ways that spirit of charity, that search for common ground, feels more old-fashioned than anything else about the film, and as a contrast to our social media world of instant judgement and bad-faith hot takes I found it very moving. The cross-generational encounters touched me the most, because (speaking as someone who is technically a 'millennial') I don't like the current media fashion for talking up the cultural gulfs between old and young, instead of trying to find ways to bridge them; though again the difference is not so much with how people really treat each other other, but with what our culture chooses to highlight and praise, the aggressive behaviour which is rewarded, the stories the media chooses to tell. If it was possible to tell stories of cross-generational empathy in the middle of wartime, so much darker and more dangerous than our own times, I don't really understand why it should be so unfashionable now. But then, I'm the kind of millennial who likes films made in 1944, so I gave up trying to be fashionable long ago... 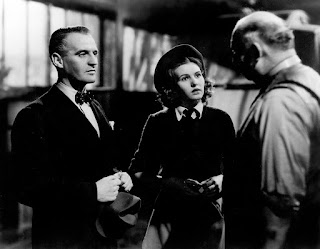 The plot of this film is famously odd - it wasn't popular when it first came out and got some scathing contemporary reviews. For me this oddness is actually part of what makes it so endearing, as if it somehow transcends such boringly mundane things as narrative logic and a sensibly planned plot. It's like one of those medieval romances where the story is full of absurdities (or so they seem to the modern reader, trained on realist novels), but the final resolution - lovers and families reunited, or the lost resurrected - is so heartbreakingly joyful that it doesn't matter. The intense emotional response produced in the reader, and the beauty of the art itself, both overpower any incoherency of plot; you love the experience of it so much that you simply don't care if it doesn't make rational sense. (If you don't know the kind of medieval romance I mean, the end of The Winter's Tale might be a more familiar example.) Those reunions and resurrections are examples of what Tolkien called eucatastrophe, the moment of deliverance in a fairy-story which is not just a cheap happy ending, but a kind of literary miracle:

The consolation of fairy-stories, the joy of the happy ending: or more correctly of the good catastrophe, the sudden joyous “turn” (for there is no true end to any fairy-tale): this joy, which is one of the things which fairy-stories can produce supremely well, is not essentially 'escapist', nor 'fugitive'. In its fairy-tale—or otherworld—setting, it is a sudden and miraculous grace: never to be counted on to recur. It does not deny the existence of dyscatastrophe, of sorrow and failure: the possibility of these is necessary to the joy of deliverance; it denies (in the face of much evidence, if you will) universal final defeat and in so far is evangelium, giving a fleeting glimpse of Joy, Joy beyond the walls of the world, poignant as grief.

It is the mark of a good fairy-story, of the higher or more complete kind, that however wild its events, however fantastic or terrible the adventures, it can give to child or man that hears it, when the “turn” comes, a catch of the breath, a beat and lifting of the heart, near to (or indeed accompanied by) tears, as keen as that given by any form of literary art, and having a peculiar quality.

A Canterbury Tale has one of the most powerful moments of eucatastrophe I've ever seen on film; though not quite a fairy-tale, this is a world alive with the possibility of miracles and blessings past hope. One reason the film's ending seemed so odd to its first critics is that - in what is ostensibly a mystery-story - it denies the mystery-story's need for punishment and retribution. Instead its ending is full of blessings; and at the end of a pilgrimage, sin is swallowed up in grace. 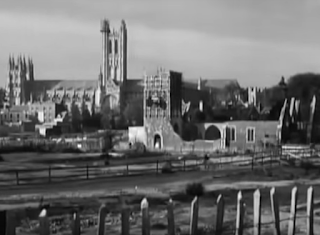 The bombed streets of Canterbury, from A Canterbury Tale
Posted by Clerk of Oxford at 8:48 pm No comments: