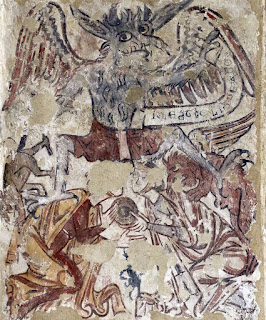 My latest column for History Today can be read online at this link. Most of it is about Piers Plowman, but here's the final paragraph:


This poem’s concern with wasteful words is part of a wider conversation in medieval society about the misuse of speech. Many medieval writers condemn what they call ‘janglers’ – an expressive descriptor for people who use words in a wasteful or destructive way, by idle chatter, spreading gossip and slander, or hurting other people. This concern was personified by the story of the devil Titivillus, a demon whose speciality was keeping track of sinful words. He was said to go around the world collecting idle words (and even scribal errors, the medieval equivalent of careless typos) and gathering them up in a sack, so that their speakers could be held accountable for them at Judgement Day. This, too, feels disconcertingly timely: what would Titivillus collect today but hasty, intemperate, or ill-considered tweets?


From a glance at the Middle English Dictionary's entries for jangler and janglen, you can see that this concern about harmful words was a very wide-ranging one. It covers all classes of people, from bishops to schoolboys, and all kinds of destructive speech: snide carping, drunken boasts, unnecessary arguments, ignorant gossip, and many forms of excessive, wasteful words. Since the onslaught of email and social media in the past few years, it has sometimes felt as if our culture is drowning in words - billions of words, most of them of no lasting good to anyone, and many of them actively doing harm. (Appropriately, you can see in the MED entry that one of the uses of jangle was to refer to birds' chatter, to which noisy human speech, then as now, was often compared, and so 'to twitter' is in fact one of the definitions of the word.) But perhaps it felt the same in the Middle Ages. Of course the problem is not the words, but the fallible human beings who use them; with 'jangling' as with 'tales' - they often go together for medieval writers - new technology only presents us with old problems in new forms.

One of the most memorable medieval depictions of the devil Titivillus, expert in sinful words, appears in the 15th-century English play Mankind. In this play, the character of Mankind is caught between an array of worldly temptations on the one hand, and on the other hand the figure of Mercy, who is trying to strengthen him to resist. That makes it sound incredibly worthy, but in fact it's a very clever and witty play, in which language and the right use of words is explored with great subtlety and humour. Mercy speaks with dignified authority, and gives Mankind lots of good advice in stately, poetic, Latinate speech; like Holy Church in Piers Plowman, he preaches on self-restraint, not wasting time, and the benefits of moderation ('Mesure ys tresure', he says). But a crowd of raucous, riotous temptations, the demon Titivillus among them, drowns out Mercy's speeches with their cacophony of words, as they tease and taunt and tempt Mankind into joining their wicked ways. Their quick, funny, irreverent byplay would delight any audience, and they don't just seduce Mankind, but the viewer as well; at one point they get the whole audience to sing along with a song which rapidly turns very rude indeed. Because Titivillus talks directly to the audience, we are drawn into his schemes to distract Mankind away from his prayers, and are even induced to give him money. It's the wicked characters who have all the the energy and all the best lines, and they even have modern fashion on their side; two of them are 'New Guise' and 'Nowadays', presumably because people are always inclined to think that the temptations of their own day are the worst there have ever been...

You can read the whole play online here, with an introduction to its context - do read it, it's really quite something. It has been suggested that it was intended to be performed at Shrovetide (i.e. today): the carnival spirit of the play is fitting for the eve of Lent, and so too is its concern with temptation, penance, and reform. The audience watching this play, laughing along with the vices and demons, would recognise from observing their own reaction just how seductive sinful speech can be - how it looks like cleverness, or wit, or a bit of harmless fun, right up until the moment when somebody really gets hurt. Medieval moralists often say that the best remedy for sinful jangling is another, holier kind of speech, 'shrift of mouth', the confession or shriving from which Shrovetide takes its name. Whether or not you'll be going to confession this Shrove Tuesday, a better use of words is something we can all aim for.
Posted by Clerk of Oxford at 7:00 am No comments: