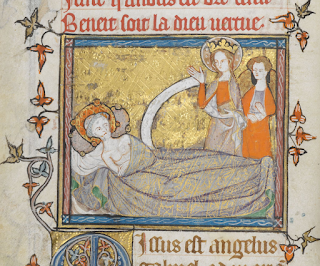 Now we're into November, it feels like time to post a particularly lovely medieval seasonal poem. It's an autumn poem in praise of the Virgin Mary, which begins by contemplating the transience of earthly life, of human beauty which fades like summer flowers, and then turns to the remedy: the healing herbs of Mary, the best doctor 'from Caithness to Dublin', whose beauty and love do not fade.

The poem comes from British Library MS. Harley 2253, one of the most important manuscript collections of medieval poetry from England; you can read about it here and see pictures of it here.  (The images of Mary in this post are all from British Library, Egerton 2781, which has been dated to the same decade as the Harley manuscript, the 1340s).

From Petresbourh in o morewenyng,
As y me wende o my pleyghyng,
On mi folie y thohte;
Menen y gon my mournyng
To hire that ber the heuene kyng,
Of merci hire bysohte:
'Ledy, preye thi sone for ous
That ous duere bohte,
Ant shild vs from the lothe hous
That to the fend is wrohte.'

My herte of dedes wes fordred,
Of synne that y haue my fleish fed
Ant folwed al my tyme,
That y not whider I shal be led
When Y lygge on dethes bed,
In ioie ore into pyne.
On o ledy myn hope is,
Moder ant virgyne;
We shulen into heuene blis
Thurh hire medicine. 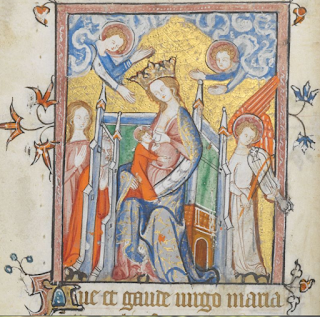 Now wither the rose and lily-flower which once bore a sweet scent, in summer, that sweet season. There is no queen so powerful or mighty, nor any lady so bright in chamber, that death shall not come upon her. He who wishes to forgo bodily lusts and win the joys of heaven, let his thought be ever on Jesu, whose side was pierced.

From Peterborough one morning, as I went out to amuse myself, I thought upon my folly. I made appeal in my sorrow to her who bore the heavenly king, and beseeched her for mercy: 'Lady, pray for us to thy Son, who bought us at so dear a price, and shield us from the hateful house that is prepared for the devil.'

My heart was terrified at all the sinful deeds with which I have fostered my flesh and have followed all my life. I do not know where I shall be led when I lie on my death-bed, whether to joy or suffering. In one lady is all my hope, mother and virgin; we may come into heaven's bliss through her medicine.

Better is her medicine than any mead or any wine; her herbs smell sweet. From Caithness to Dublin there is no doctor so good for the healing of our sorrows: the man who feels any grief and wishes to forsake his folly, without gold or any treasure may be made whole and well [by turning to her].

Penance shall be such a man's plaster. I will ever serve her, now and all my life. Now all those who were ever enslaved are free, all because of that lady, beautiful and slender. Praised be her five joys! Wherever there is anyone sick, let them go to her joyfully; through her both maiden and wife are brought to bliss.

You who rule the bowers of heaven, have pity on our sins, for the sake of him who gave his body on the tree! Women, in your gaiety, think on the pains of God: though you may be fair and beautiful to look at, your flowers shall fade. Jesu, whom all this world honours, have mercy on us.


This is one of those poems where much of the beauty of the verse is lost in translation, so here's a looser rendering preserving some of the rhymes. You can hear a reading of the poem here.

Now shrinketh rose and lily-flower,
That once did bear that sweet savour
In summer, that sweet tide;
There is no queen so strong or stour, [powerful]
Nor no lady so bright in bower
To whom death shall not glide.
He who will fleshly lust forgon [forsake]
And in heavenly bliss abide,
On Jesu be his thought anon,
Who pierced was in his side.

From Peterborough one morning,
As I went out in my playing, [recreation]
On my folly I thought;
Moaning I made my mourning
To her who bore the heavenly king,
For mercy her besought:
'Lady, pray thy son for us
Who us so dearly bought,
And shield us from the hateful house
That for the fiend is wrought.'

My heart of deeds was afraid,
For sin that I have my flesh fed
And followed all my time;
I know not whither I shall be led
When I lie on death's bed,
In joy or into pain.
On one lady my hope is,
Mother and virgin;
We shall enter heaven's bliss
Through her medicine.

Better is her medicine
Than any mead or any wine;
Her herbs smell sweet.
From Caithness to Dublin
Is no doctor so fine
Our sorrows to relieve.
The man who feels any sore,
And his folly will leave,
Without gold or any treasure
May be made sound and safe.

Of penance is his plaster all,
And ever serve her I shall,
Now and all my life;
Now is free that ere was thrall
All through that lady kind and small, [slender]
Praised be her joys five!
Anyone who sick is,
To her should hasten blithe; [gladly]
Through her may be brought to bliss
Both maiden and wife.

For he who put his body on the tree,
Of our sins have pity,
You who reign in heaven's bowers.
Women, in thy gaiety,
Think thou on God's showers! [pains]
Though thou be fair and bright on ble, [beautiful in appearance]
Fade shall thy flowers.
Jesu, have mercy of us,
Whom all this world honours.


There are some lovely things going on in this poem. Flower imagery is very common in Middle English lyrics to describe the Virgin Mary, and in this poem there's an implicit contrast between the earthly rose and lily, which fade and die, and the Virgin, 'rose of Sharon, lily of the valley', as well as between the transitory summer scents of the flowers and the sweet-smelling herbs of the Virgin's medicine, 'better than any mead or wine'.

The flowers mentioned in the first verse are a reminder of the transience of all earthly things, but they're not just a bit of decorative elaboration, or seasonal colouring: the poem presents a contrast in efficacy, in power, between plants which are beautiful but passing and plants which heal. It's interesting to read this poem in conjunction with one of the most famous Middle English carols about Mary, 'There is no rose of such vertu/ As is the rose that bore Jesu': the vertu of a plant is its quickening power, the life-giving sap which is also the salve in the Virgin's medicinal herbs. Perhaps it's not just because of the rhyme that Christ's cross, in the final verse, is called 'the tree' - another life-bringing plant. The last verse plays on the double meaning of 'shours', which means both 'pains' and 'showers' (of rain, etc.); the female reader is asked to reflect on Christ's suffering but also on the rains - autumn showers - which will wither the flower of her own beauty. 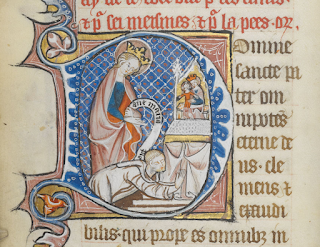 For more Middle English poems to Mary, see this page and the following posts:

'Come, my dear spouse and lady free'
'Mirror without spot, red rose of Jericho'
Ecce ancilla domini
In a tabernacle of a tower
Nu this fules singet
Marye, mayde mylde and fre
Glade us maiden, moder milde
Posted by Clerk of Oxford at 1:32 pm