St Andrew and the Bargain of Heaven 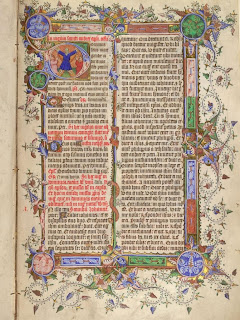 Prayers for the feast of St Andrew, BL Arundel 109, f.162
Here are some extracts from Ælfric's sermon for St Andrew's Day, 30 November, written at the end of the tenth century. (The whole sermon can be found here, but this is my translation.) 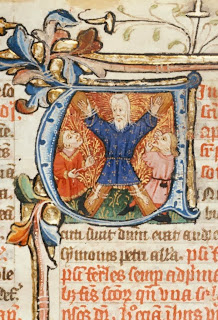 'Christ at a certain time went by the Galilean sea, and saw two brothers, Simon, who was called Peter, and his brother Andrew, et cetera.

Just as they had first fished with nets on the waves of the sea, Christ made it so that afterwards they would fish with his heavenly teaching for the souls of men; for they drew people from bodily lusts and from worldly sins to the stability of the land of the living, that is, to that eternal homeland of which the prophet [Jeremiah] spoke through God's spirit: "I will send my fishers, and they will fish for them; my hunters, and they will hunt them from every mountain and from every hill." God chose fishers and untaught men for his disciples, and taught them so that their learning excelled all the wisdom of the world, and with their preaching they brought kings and emperors to the true faith.

[In Old English this opposition between untaught disciples and wisdom of the world is reinforced by the fact that the OE word for 'disciple', leorningcniht ('learning-boy') preserves the Latin's relationship to the verb 'to learn' (discere).]

If the Saviour had from the beginning chosen eloquent teachers and men wise in the world, and sent such people to preach, then it would have seemed as if the true faith had not arisen through the power of God, but through worldly eloquence. He chose fishermen before he chose emperors, because it is better that the emperor, when he comes to Rome, should cast down his crown and kneel at the tomb of the fisherman than that the fisherman should kneel at the emperor’s tomb. Emperors he did choose, but nonetheless he appointed the poor fisherman before the powerful emperor. Again, he later chose the wealthy, but it might have seemed as if they were chosen for their goods, if he had not previously chosen the poor. He later chose men wise in the world, but they would have grown proud, if he had not previously chosen the unlearned fishermen...

It may be that one of you is thinking in his secret thoughts, “What did those brothers Peter and Andrew leave, if they had almost nothing?” But in this we should consider their desire rather than their possessions. He leaves much who keeps nothing for himself. Truly, we hold on to our possessions with great love, and the things we do not have we seek for with immense desire. Peter and Andrew left much, when they both entirely left the will to possess anything, and renounced their own desires.

Now someone might say, "I would imitate the apostles, who renounced all worldly things, but I don’t have any possessions to renounce." But God considers a man’s heart, and not his possessions. He does not count what great riches we spend in offerings to him, but observes with how great a desire we make offerings to him. Now truly, these holy traders, Peter and Andrew, with their nets and boats purchased for themselves eternal life. The kingdom of God has no valuation of price, but is priced according to what a man has. The kingdom of heaven was given to these brothers in exchange for their nets and boats, and afterwards to the wealthy Zacchaeus for half his possessions, and to a certain widow for a farthing, and to a certain man for one drink of water... My brothers, consider now at how small a price God’s kingdom is purchased, and how precious it is to possess! This bargain cannot be bought with any money, but is priced for every man according to what he possesses.' 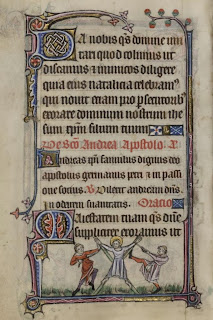 Prayers to St Andrew, Yates Thompson 13
This reflection on value and exchange plays around with the language of economic transactions: bycgan 'to buy' and ciepan 'to purchase, to barter'. It seems even more appropriate now that St Andrew's Day falls in the middle of Christmas shopping! (I assume it wasn't in Ælfric's day; at least, I don't think the Anglo-Saxons had a version of Black Friday...) Ælfric calls the kingdom of God a ceap, a 'bargain' - the word from which we get 'cheap', as well as many English place-names like Cheapside, Chipping, Chepstow, the names of places which were once (and often still are) areas of markets and trading. Peter and Andrew, who purchase heaven by giving up their boats, become halgan cypan 'holy traders' - holy hagglers, you might say.

Ælfric goes on to describe Andrew's martyrdom, and to interpret the names of the apostles; Andrew's he interprets (accurately, I think?) as 'manly', in Old English ðegenlic, 'thegn-like'.  Elsewhere in Anglo-Saxon literature, this is a term of the highest approbation applied to a warrior of Essex named Offa, who died in battle at Maldon, killed beside his lord fighting against the Vikings: he læg ðegenlice ðeodne gehende, 'he lay, as befits a thegn, next to his lord'. In Old English poetry the apostles are regularly called 'Christ's thegns' and Andrew, of course, was martyred for his lord; it's nice to think that Offa and Andrew, though their lives were so different, had something in common in their deaths. 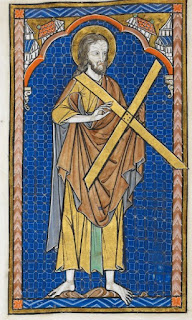 St Andrew in a 13th-century Psalter (BL Add. 50000, f. 8v)
Andrew's cult has a long history in England: Andrew was the dedicatee of one of the earliest churches founded after the conversion of the Anglo-Saxons, when in 604 Archbishop Justus founded St Andrew's at Rochester (now Rochester Cathedral). Andrew is also the subject of a remarkable Old English poem, known as Andreas, which tells a fantastic story about Andrew's journey to rescue St Matthew from the hands of cannibals, guided by Christ disguised as a sailor. Perhaps St Andrew's most enthusiastic Anglo-Saxon fan was St Dunstan, who owned a staff with one of Andrew's teeth set in the top of it, encased in silver, because of his devotion to the saint. Dunstan had broken a previous staff fighting against the devil (in the shape of a bear), and made this replacement with Andrew's tooth because he said the devil would never be able to break it. In the late eleventh century, pilgrims to Canterbury were miraculously healed by water in which this staff had been dipped, infused with the joint power of Dunstan and Andrew. (I can't help imagining that the staff looked like this...)

There are also plenty of later medieval depictions of St Andrew from England, as you can see from the images in this post (which are mostly fourteenth/fifteenth century), and as late as the nineteenth century the lacemakers of Bedfordshire and the Midlands were celebrating St Andrew's feast with 'tandry cakes', cross-dressing and elderberry wine; in Kent they apparently celebrated by going squirrel-hunting on this day! In the British Isles St Andrew now belongs by right to Scotland, but he has a good venerable history in England; we should enjoy his day too ;)


Andrew, Peter and Paul, in a medieval painting at Norwich Cathedral
Posted by Clerk of Oxford at 5:47 pm