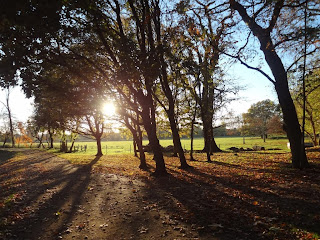 It's a truism among medievalists that Anglo-Saxon poetry is full of winters. Snow, hail, frost, rain and ice beset the characters of many Old English poems: the classic examples are The Wanderer and The Seafarer, in which a bleak winter landscape emphasises the distance between the speaker and the delights of human companionship. In the first poem this intensifies the speaker's loneliness and misery; in the second it seems to represent a kind of ascetic separation from the things of this world, for winter stands opposed to everything that human society can provide: protection, warmth, friendship, love. In Bede's story of the sparrow, it is winter which represents the vast unknowable beyond lying outside human perception: all that we know and experience is represented by the companionship of the hall, where "a fire is kindled and the hall warmed, while it rained and snowed and stormed outside". All else is winter darkness.

Elsewhere the trauma of winter is that it 'fetters' the earth, holds it in painful stasis; in Beowulf being trapped by winter brings simmering tensions to a head, and the vocabulary of winter (of which there is a great deal) involves snow and frost binding, trapping, pressing, crushing. It's a pleasing fact about the Old English language that winters were also the way of counting years, so when The Wanderer says "ne mæg weorþan wis wer, ær he age wintra dæl in woruldrice", 'a man may not become wise before he has had his share of winters in the world', it's not clear whether he is talking about learning from experience of years or winters or both. Anglo-Saxon poets were not incapable of seeing beauty in winter, particularly in the miraculous new 'bridges' formed by jewel-bright ice, but the poetic uses of winter are almost overwhelmingly negative: it is a threat, everything antithetical to human happiness.

All this is a well-known feature of Old English poetry (at least to those who read Old English poetry...), but this post was sparked by re-reading The Wanderer and musing on the compound wintercearig, 'winter-sorrowful', which appears only in this poem and was probably coined by the poet. It reminded me of the Middle English poem 'Winter wakeneth all my care', but the landscape envisaged by the Middle English poet is different from that presented in The Wanderer: the later poem is concerned with the fall of the leaves, not snow and ice. So I got interested in whether Anglo-Saxon poets talk about this phase of the year, between harvest and midwinter. Since we are in autumn and the snow hasn't come yet, here are two brief descriptions of what comes before winter, when the leaves fall.

The pictures were all taken in Christ Church Meadow in Oxford earlier this week. 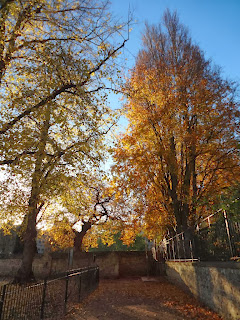 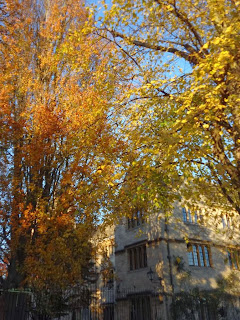 A little while the leaves are green;
then they wither again, fall to the earth,
and die, turn to dust.
Just so fall those who for a long time
continue in their crimes, live in wickedness,
hide their treasures, hoard them eagerly
in safe places at the pleasure of the devil. 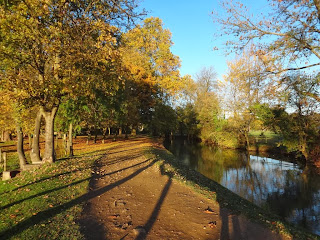 A tree on the earth must
lose its leaves; the branches mourn. 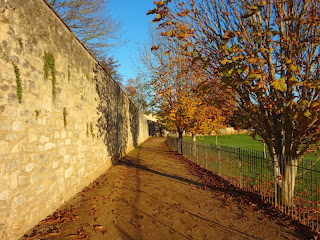 These two extracts offer two different ways of considering the fall of the leaves. The first is from a poem which imagines a debate between Saturn, a pagan prince, and the wise King Solomon: it's something like a riddle contest, in which Saturn challenges Solomon with a series of questions about the nature of the world, and Solomon provides cryptic and not entirely satisfying answers. The text is difficult and obscure, but by any standard Saturn's questions are unanswerable ones (to us as well as to Solomon): Why are earthly goods distributed unequally? Why do sorrow and laughter live so close together? Why cannot all men be saved? The most unanswerable question of all concerns wyrd, the Old English word for 'fate' or 'the course of events': "Why does mighty wyrd torment us?" This is perhaps the Anglo-Saxon version of the problem of pain.

The questions Saturn asks about the natural world reflect this sense that the world is a mysterious and unfathomable place, governed by forces beyond control, in which all is not as it should be; rather than searching out scientific knowledge, these questions have an unspoken but unmistakable metaphorical tone. Why does the sun not shine evenly across the world, but leaves darkness in many places? Why is the sea never quiet? And, of course, there is a question about winter: "Why does snow fall and cover the ground, conceal the shoots of plants, bind up the fruits, crush and repress them, so that they are shrivelled with cold?"

The section parallelling the fall of the leaves with the fall of the wicked man (which sounds to me like an echo of Psalm 37) is Solomon's attempt to discern order in this chaos and inequality. Here alone the natural world is presented as in harmony with principles of justice. But his effort is not entirely successful; it's difficult not to feel sympathy for the falling leaves, and thus for the falling men.

The description of what happens to the leaves involves three alliterating verbs: fealewiað, feallað and forweorniað. The last two mean 'fall' and 'perish, die' respectively; the first verb, fealewian, means 'to turn fallow', fallow being the name of a colour between red and brownish yellow (the colour from which the fallow-deer gets its name). Old English colour-names do not map easily on to modern ideas of colour, but fallow, fealo, is the shade of autumn leaves, wooden shields and turbulent winter waves - whatever that says to you. The Old English verb fealewian became Middle English fallowen, which appears in reference to autumn fading in both 'Winter wakeneth all my care' and 'Now shrinketh rose'. The latter instance refers to flowers (speaking metaphorically of the flowers of a woman's beauty) but the former paints the same opposition as Solomon between the green leaves of spring and the yellow leaves of autumn, and this colour opposition crops up a few times in Early Middle English poetry. It appeals, because aren't the leaves of spring yellow-green in their beginning, as the leaves of autumn are yellow-red in their dying? 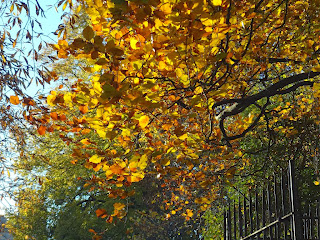 And by comparison we have:

A tree on the earth must
lose its leaves; the branches mourn.

It's tempting to leave that uncontextualised, so beautiful does it look standing all alone; but in context (in a poem which is a compilation of short observations and maxims about life and the natural world) it forms part of a larger reflection on grief and human frailty:

A woman and man must bring into the world
a child by birth. A tree on the earth must
lose its leaves; the branches mourn.
Those who are ready must go; the doomed die
and every day struggle against their departure
from the world.

The verb I've translated here as 'must' is sceal, part of the fixed form of a maxim which describes both how things are and how they must be; part of the difficulty in translating and interpreting the maxims is trying to understand the source and the power behind this must, if indeed it has a source at all. If it is wyrd, we should not necessarily imagine a personified force of fate, a vengeful Nemesis or destiny-weaving Norn (although that also can't be ruled out); wyrd is a noun formed from the verb weorþan, 'to become, to happen, to come about', so perhaps it is nothing more than 'things that happen' - a mysterious power enough, to ordain that the leaves must fall and men must die.

gnornian has the full force of 'mourn, lament, grieve'; the emotion is attributed to the tree and not the parents, but the parallel is clear, and the organic metaphor a natural one. It helps, perhaps, that in Old English both trees and humans have leomu 'limbs' (that's the word for 'branches' here), and that there's so close a resemblance in sound and form between the words bearn and beam, 'child' and 'tree'. I'm reminded of Guðrún in the Old Norse poem Hamðismál, lamenting the loss of her brothers and daughter:

I am standing alone
like the aspen in the wood,
deprived of kinsmen
like a fir of its branches,
stripped of joy
like a tree of its leaves,
when a girl gathering branches
comes on a warm day.

It is a common lament in Old English poetry that "Modor ne rædeð, ðonne heo magan cenneð, hu him weorðe geond worold widsið sceapen" - 'a mother cannot foresee, when she bears a child, how his journey through the world will be shaped for him'. Or, to put it another way, what his winters will bring. 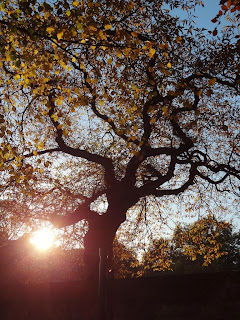 The idea of the branches mourning in Winter really intrigues me. The Anglo Saxons clearly looked to Winter with a great sense of foreboding!

Ah, this is very nice. Helps me to understand better how people in my own stories will relate to the season.

Lovely! Thanks for pointing out the delicious similarity of bearn/beam, for 'child' and 'tree' giving a more poignant meaning to the passage.

This was enchanting. Our modern world is in need of words like these to describe our experiences. Thank you.