Some Kent Churches: Stodmarsh in Summer

As November goes on it becomes difficult to remember what summer feels like; but I remember that on a sunny day in August, under a cloudless blue sky, I visited an unpretending little church in the village of Stodmarsh in Kent. I think you can guess from its name what kind of landscape Stodmarsh inhabits; the marsh in question lies east of Canterbury, between the city and the Isle of Thanet, where there was once a channel navigable by ship. The channel silted up centuries ago, but Stodmarsh still has the name it had in June 686, when Eadric, king of Kent, gave land at 'the marsh called Stodmersch' to the monastery of St Augustine's, Canterbury, which was at that time less than a hundred years old. 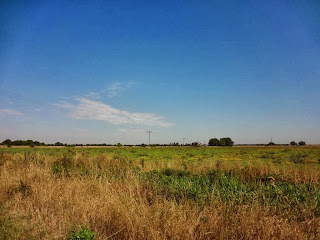 The area near the village is now a nature reserve. I can't tell the difference between reserved nature and unreserved nature, and in any case I only went to the church; but I did see a butterfly or two. 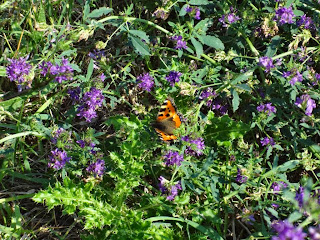 The church's little bell-tower was being renovated, but it was still a beautiful sight under a blue sky: 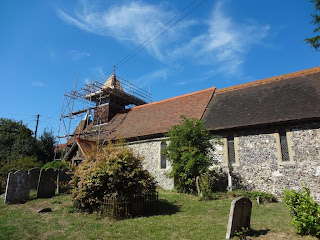 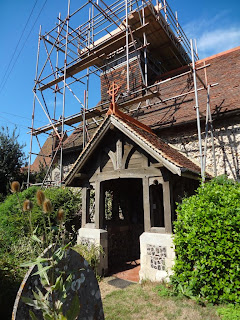 It's right next to an oasthouse, as all Kent churches really ought to be: 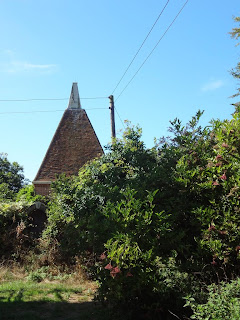 The scholarship of the Kent Archaeological Society, in its detailed description of Stodmarsh, had informed me that there are fragments of 12th-century carving somewhere in the churchyard, but I failed to locate them (not for want of trying). They apparently have a pattern comparable to the stunning Norman font at St Martin's in Canterbury. It was a shame to miss them, but I was charmed by the exterior nonetheless: a tiny green garden of a churchyard, growing up from the road without even a wall to separate them, overlooked by that oasthouse, and by this lady beside the west door: 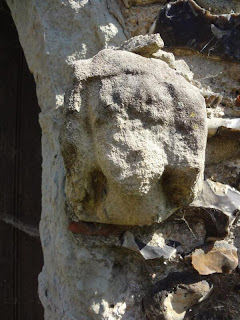 Her weatherbeaten face was a reminder that a marshside landscape can be a harsh climate, but on that sunny August day the landscape felt peaceful and full of blessings; it's as difficult to remember winter under a summer sky as the opposite, now in November.

The south doorway bears a mass dial, and a selection of assorted, anonymous crosses: 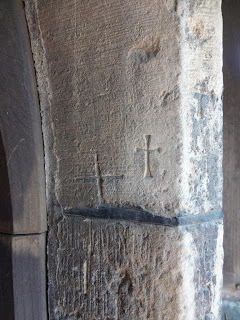 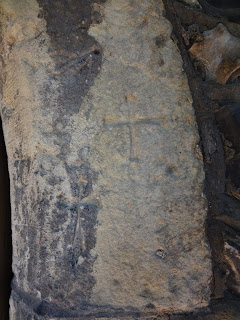 The little nave, with no windows on one side, was sunlight and shadow: 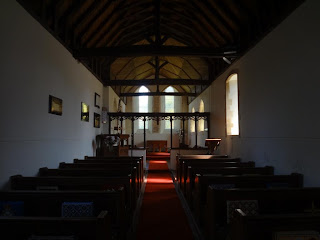 But as another reminder of the challenges of living and building on a marsh, there are some huge wooden supports inside the church, holding up the wall at the west end: 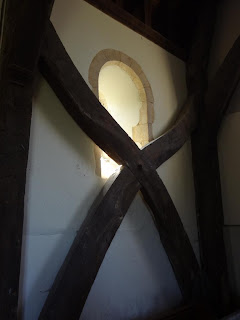 In the chancel we encounter Early Modern spelling in the wild: 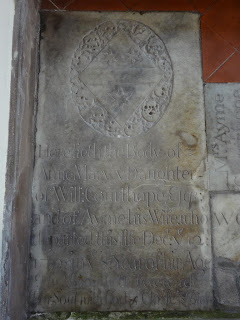 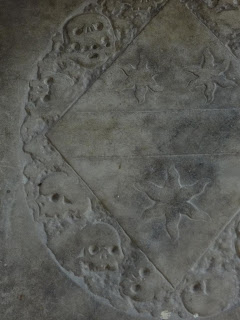 The windows in the chancel are thirteenth-century, with elegant arches: 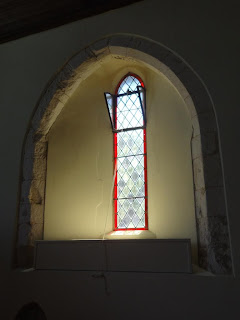 But, even better, one of them has all its original glass: 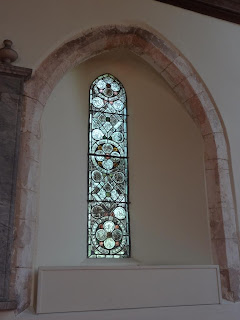 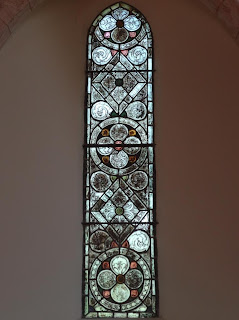 Complete thirteenth-century windows don't come along every day, especially in out-of-the-way village churches. The church didn't make much fuss about it, but this is really quite special in its age and completeness. It's grisaille glass, which I usually don't find very attractive, but the soft pink and green touches in this relieve the monotony (monochromy, rather). 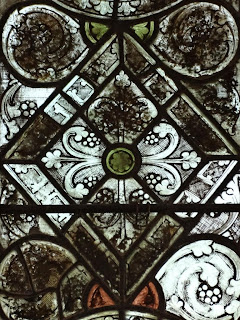 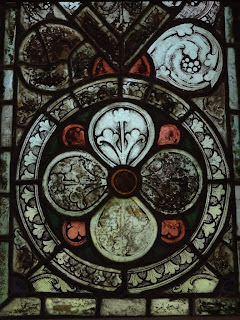 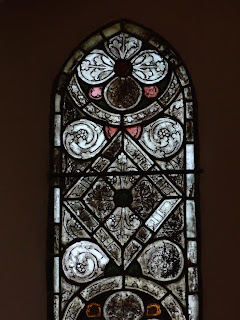 There are some other windows with sections and fragments of medieval glass: 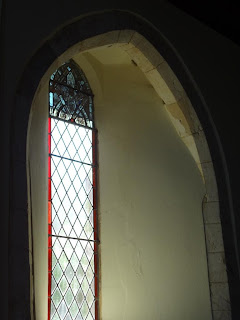 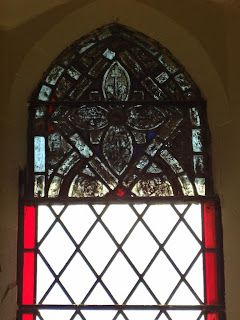 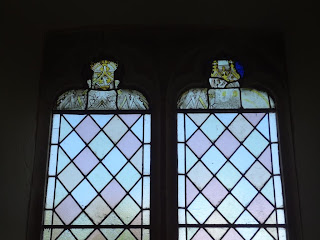 These last are fifteenth-century fragments and according to our guide, they were still part of an intact window in the late eighteenth century, depicting "the figure of the blessed Virgin, crowned, with the child in her arms; and the figure of a woman, with the head of an old man lying on her arm; both beautifully done". I wonder what scene would be depicted by a woman with an old man lying on her arm? It's a sting to think of what is lost to us - but how much more reason to treasure what remains.
Posted by Clerk of Oxford at 10:25 pm