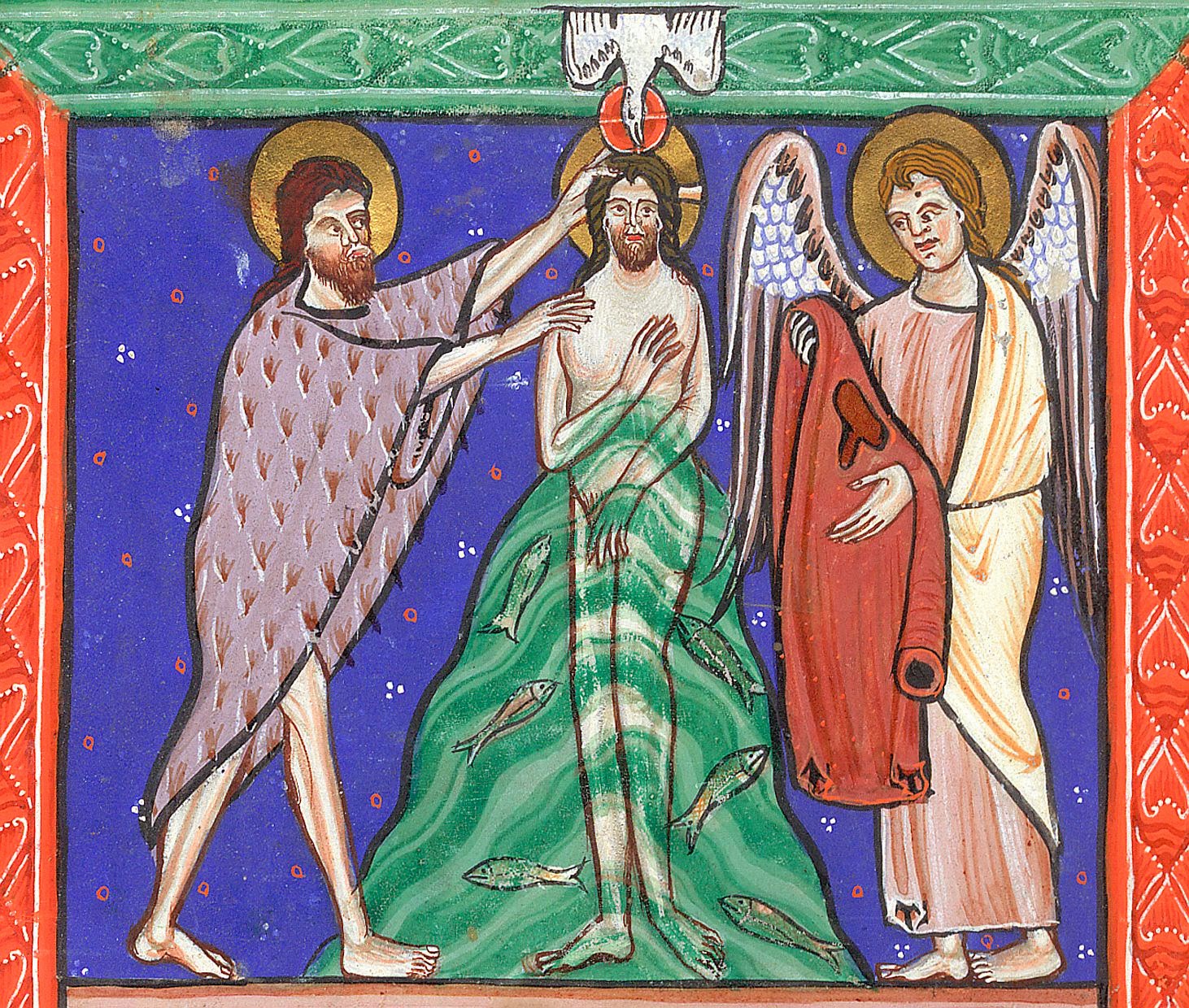 As you will know if you've been reading this blog for any length of time, there is a medieval carol for every occasion - and this one is about the Baptism of Christ.

When Jesus Christ baptised was,
The Holy Ghost descended with grace;
The Father's voice was heard in that place:
‘Hic est Filius meus; ipsum audite.’

There were three Persons and one Lord,
The Son baptised with one accord;
The Father said these blessed words:
‘Hic est Filius meus; ipsum audite.’

Consider now, all Christianity,
How the Father said because of thee
The great mystery of the Trinity:
‘Hic est Filius meus; ipsum audite.’

Now, Jesu, as thou art both God and man,
And were baptised in River Jordan,
At our last end, we pray thee, say then:
‘Hic est Filius meus; ipsum audite.’

This carol survives in two manuscripts, one of them the Ritson MS (British Library Additional 5665), a manuscript of English and Latin carols, songs and motets which was compiled between c.1475-1510 at a religious house somewhere in Devon. In the manuscript the carol is set to music for two and three voices, and bears the names of its composers, John Trouluffe and Richard Smert.  It's interesting that the first verse bears a resemblance to the baptism verse in the carol 'Tomorrow shall be my dancing day', where it is told in the first-person voice of Christ:

Then afterwards baptized I was;
The Holy Ghost on me did glance,
My Father’s voice heard from above,
To call my true love to my dance.

The rhyme-scheme and the final-line refrain are different, of course, but there may be a distant relationship between the two songs - since the first and third lines don't rhyme as they do in the other verses of 'Tomorrow shall be my dancing day', I wonder whether that carol has substituted 'heard from above' for 'heard in that place'...

'Jesus autem hodie' has been set by two modern composers; this is by Peter Maxwell Davies:

And this by Peter Hallock:

When Jhesus Criste baptyzed was,
The Holy Gost descended with grace;
The Fadyr voys was herde in the place:
‘Hic est Filius meus; ipsum audite.’

There were thre persons and o Lorde,
The Sone baptized with on acorde,
The Fader sayde this blessed worde:
‘Hic est Filius meus; [ipsum audite.’]

Considere now, all Cristiante,
How the Fader sayde bycause of the
The grete mistery of the Trinite:
‘Hic est Filius meus; [ipsum audite.’]

Now, Jhesu, as thou art bothe God and man,
And were baptized in flom Jordayn,
Atte oure last ende, we pray the, say than:
‘Hic est Filius meus; [ipsum audite.’]
Posted by Clerk of Oxford at 1:29 pm

Very interesting! We sang the Peter Hallock setting this morning at St. Paul's Church, Albany, New York. The Middle English text (in stanza one) has "The Fadyr voys". Is this standard for the genitive? It sounds very odd in in Hallock's text as "The Father voice". In stanza four, the original text is "were baptized in flom Jordayn". Does this mean "in the river Jordan"? Hallock uses "in from Jordan". Again, very odd.

Yes, those do both sound odd to modern ears! But that uninflected form of the genitive is quite common in Middle English, as a transition between Old English inflected forms and the standard modern -s ending. And 'flom' means 'river' - it's the origin of the word 'flume'.

I'm glad to hear the Hallock setting is sung in churches - I hadn't encountered it before yesterday, but it's very striking.

Thanks for the clarification. Warlock's music doesn't leave room for an extra syllable, or we could correct "in from Jordan", which I can't imagine is grammatical in any type of English.

I like the picture of the Jordan, with all its ripples and fish! Is the red colour of the shirt which the angel holds a sign of the sacrifice to come, do you think?

(Oh, and the second video has been blocked by Hyperion records, alas!)

Could be! I have no idea why medieval artists chose to depict the Jordan in that way, like a hill of fish-filled water rather than a river! But it's very common in this scene and I do rather like it.

That's a shame about the second video - perhaps that explains why I couldn't find other recordings of the piece on youtube...