The Musical Death of Chad of Mercia 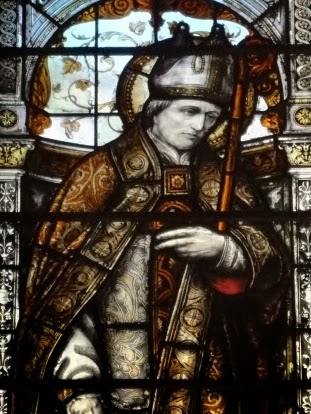 This is Bede's account of the death of St Chad of Mercia, abbot and bishop, on 2 March 672 (translation taken from here):

When he had most gloriously governed the church in that province two years and a half, the Divine Providence so ordaining, there came round a season like that of which Ecclesiastes says, "That there is a time to cast stones, and a time to gather them;" for there happened a mortality [i.e. a plague] sent from heaven, which, by means of the death of the flesh, translated the stones of the church from their earthly places to the heavenly building. And when, after many of the church of that most reverend prelate had been taken out of the flesh, his hour also drew near wherein he was to pass out of this world to our Lord, it happened one day that he was in the aforesaid dwelling, with only one brother, called Owine... 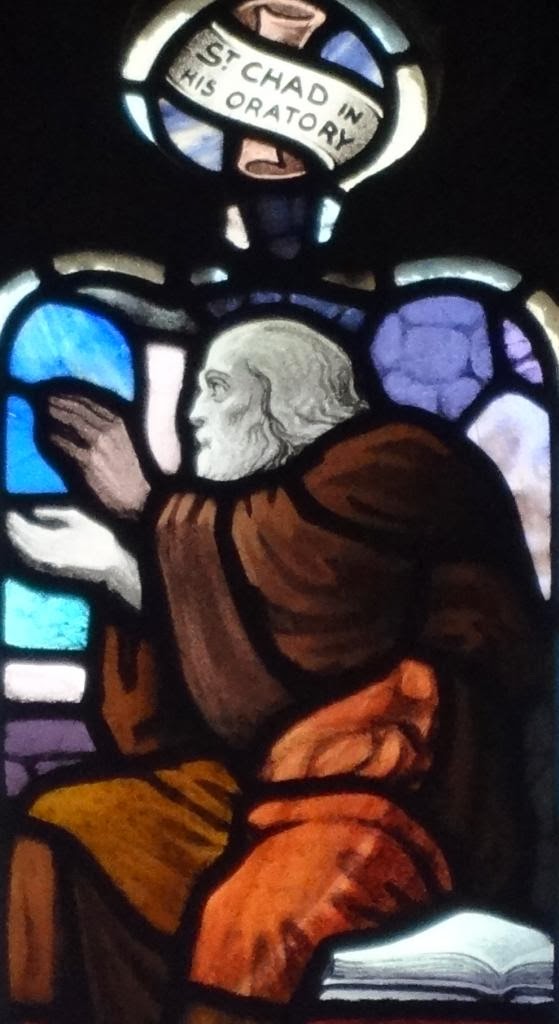 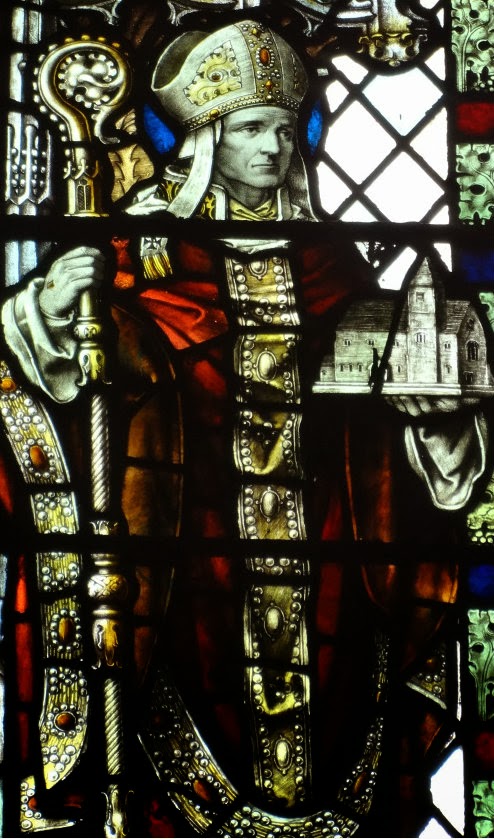 The wikipedia article about Chad is enlightening on his role in seventh-century politics, and also points out the interesting fact that St Chad's Cathedral in Birmingham is in possession of some probably authentic relics of the saint; this makes Chad one of the few Anglo-Saxon saints whose relics have survived the double trial of the Norman Conquest and the Reformation. From the Cathedral's website:

In 1538 the Shrine was dismantled under the orders of King Henry VIII and the bones of St Chad either destroyed or buried in an unknown location.

One of the priests at the Cathedral, Prebendary Arthur Dudley, rescued a box containing some of St Chad’s bones which was kept in St Chad’s Head Chapel. He asked two female relatives, probably his nieces who lived at Russells Hall, Dudley, to look after them. They in turn passed them on to two brothers, Henry and William Hodgetts, who lived at Woodsetton Farm at Sedgley near Wolverhampton. They divided the bones between them. William died in 1649 and his widow gave his share of the bones to Henry who reputedly kept them hidden on the top of his four-poster bed.

When Henry was dying in 1651 he received the Last Rites from a Jesuit priest, Fr Anthony Turner. During the Litany of the Saints Henry began adding ‘St Chad, pray for me’. Fr Turner enquired why he was so devoted to St Chad and he explained that he had some of St Chad’s bones in his possession. He handed them over to Fr Turner who wrote down all that Henry had told him about the relics and how they had come to him through the Dudley family. Fr Turner had his statement witnessed by two other Jesuits and they had a new casket made, covered in red velvet and with silver hinges and locks, made for the relics.

The Jesuits eventually handed the bones over to Basil Fitzherbert of Swynnerton Hall, near Stoke-on-Trent, for safe-keeping. Basil died in 1797 and his widow and eight-year-old son moved to a smaller house at Aston by Stone. Here a chapel was built and served as Mass centre for the surrounding district. The family eventually moved back to Swynnerton, and Aston Hall and its chapel was closed up.

In 1839 the chapel was reopened by Fr Benjamin Hulme and he discovered a chest underneath the altar in which was a velvet-covered box containing a collection of relics, including six bones wrapped in silk with Fr Turner’s document. The bones were taken to Oscott and examined by Bishop Thomas Walsh, the Vicar Apostolic of the Midland District, and his coadjutor, Bishop Nicholas Wiseman. After careful perusal of all the evidence a report was sent to Rome and Pope Gregory XVI confirmed that these were the bones of St Chad and instructed that they be enshrined in the new cathedral in Birmingham which was in the process of construction. They were placed in a shrine designed by Pugin above the High Altar on the day of its consecration on 21 June 1841. The shrine, which Pugin based on the Venerable Bede’s description of the original at Lichfield, was further embellished by Hardmans in 1931.

In 1995 Archbishop Maurice Couve de Murville arranged for a fresh examination of the bones by the University of Oxford Archaeology Unit. The report concluded that one of the bones is eighth century (and therefore cannot have belonged to St Chad) but the other five are all of the mid-seventh century. Two of the bones are left femurs and so are of different individuals. It is therefore reasonably certain that at least one and possibly three of the bones are those of St Chad. The evidence from the scientific examination was published in a Decree issued in 1997 by Archbishop Couve de Murville which required that the bones are kept together and venerated collectively. 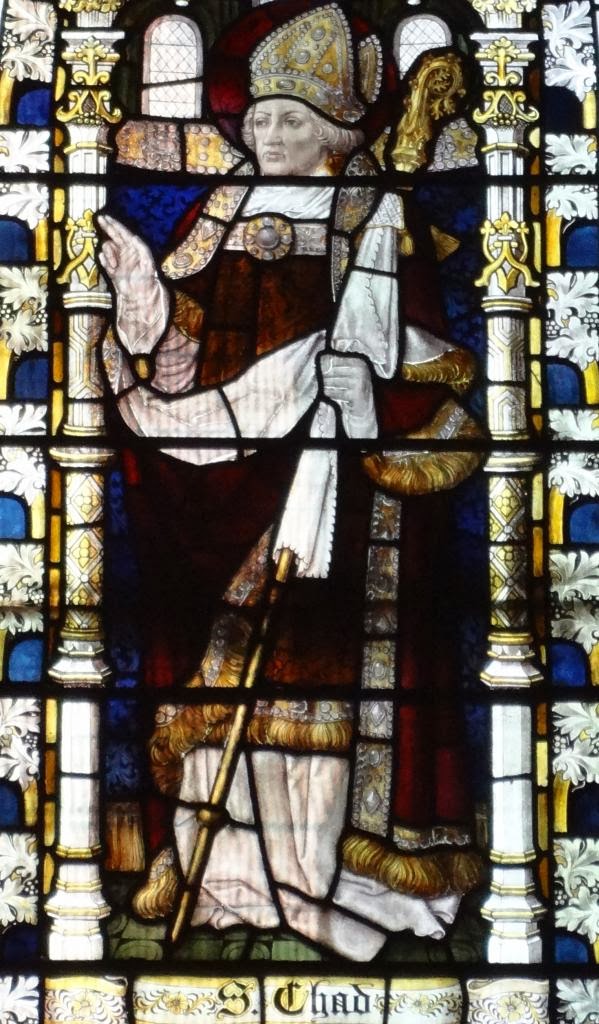 Bakewell, Derbyshire
Posted by Clerk of Oxford at 2:47 pm

Great stories here! And that stained glass window is exquisite.