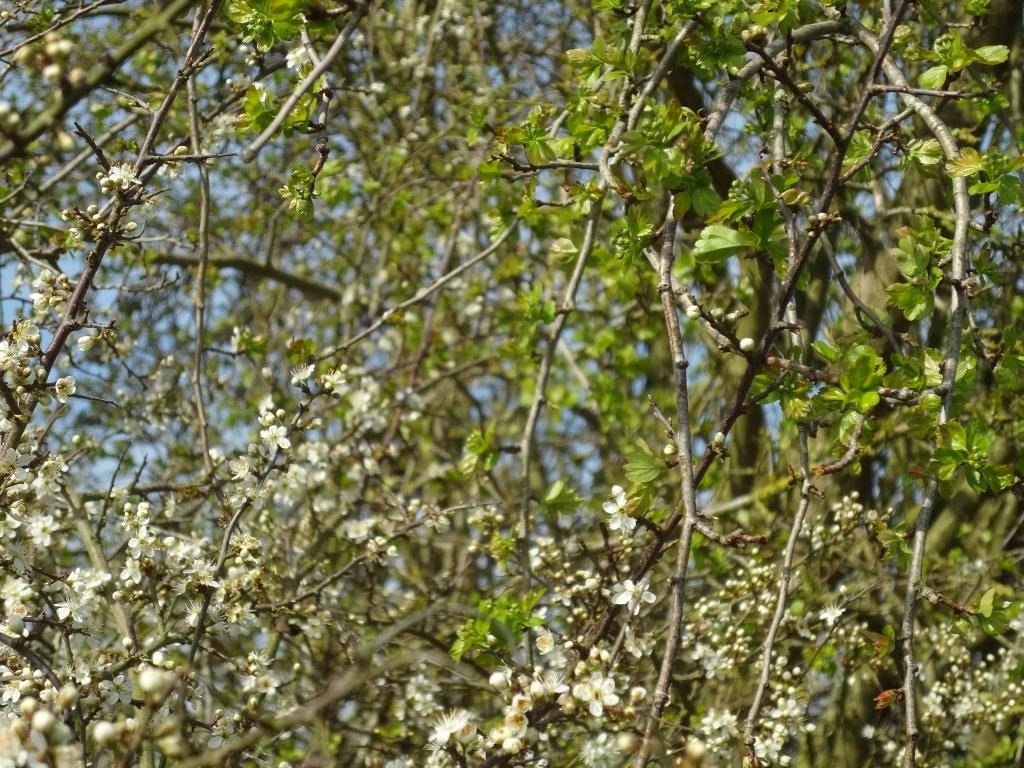 I'm going to sneak this poem in before March is over, although since it draws on 'Vexilla Regis' it's really more appropriate for later in Lent than Mid-Lent Sunday. Nonetheless - this is 'March Music', by Evelyn Underhill.

All down the windy woods, along the throbbing hedge,
And in the starting sedge,
Yea, in all choirs and places where they sing,
I hear its growing cadences that ring;
Noblest of the processionals of earth,
The great Vexilla Regis of the spring:
And topping the soft hill
With sudden joy of emerald fluttering,
Against the sky's bright edge
I see the mighty banners of the King.

Yet not unheralded
The hosts of life to victory are led:
Lo! near at hand
His little band
Of harbingers a subtle music make;
Tight scrolls crisp-rolled
Pricking from out the mould
Along the margins of the dusky brake.
Come, put your ear
To the brown earth, and hear
The glad green shout
With which each baby leaf thrusts out
Toward the clear:
Leaps to achieve its part
In the symphonic poem that breaks from Nature's heart.

Exultant, sacred mirth
That waits upon the vernal ecstasy
Of birth!
Why does she joy?
To what supreme employ
Destines the budding spray?
Does she,
As some proud mother, see
Entangled in her children's downy hair
Meshed glories that declare
An unguessed empery
Of life to be?
The catkins tasselled grey,
Enaureoled
In heavenly gold,
The wonder of the thorn —
Are these the earnests of a distant morn
That shall the woodland dress
With a dread fruitfulness?

Ah, yes!
As in old time
Joy was august, sublime,
And priests could then afford
To dance before the Lord,
Plaiting the patterns sweet
With swift enraptured feet
That worshipped in the ways of metric loveliness,
Then at the altar made their sacrifice complete:
So does the vernal play
Perpetually invite
The deep interior sight
Unto the shrine
Which makes all growth divine.
So does the flowery mist
That lies upon the ground
Prepare a Victim's way;
And every forest sound
Proclaim a Eucharist.

Lo! on those eager branches shall be hung
That Life of which the woods have ever sung;
Making themselves soft harps for the hand o' the rain
To whisper of his pain,
And, 'neath the poignant bowing of the wind
Subdued to move,
Crying to all mankind
The secret of the sacrament of love.
Yea! from a Tree
God shall shine out at thee;
For this doth Nature grow,
To this the kingly banners forward go. 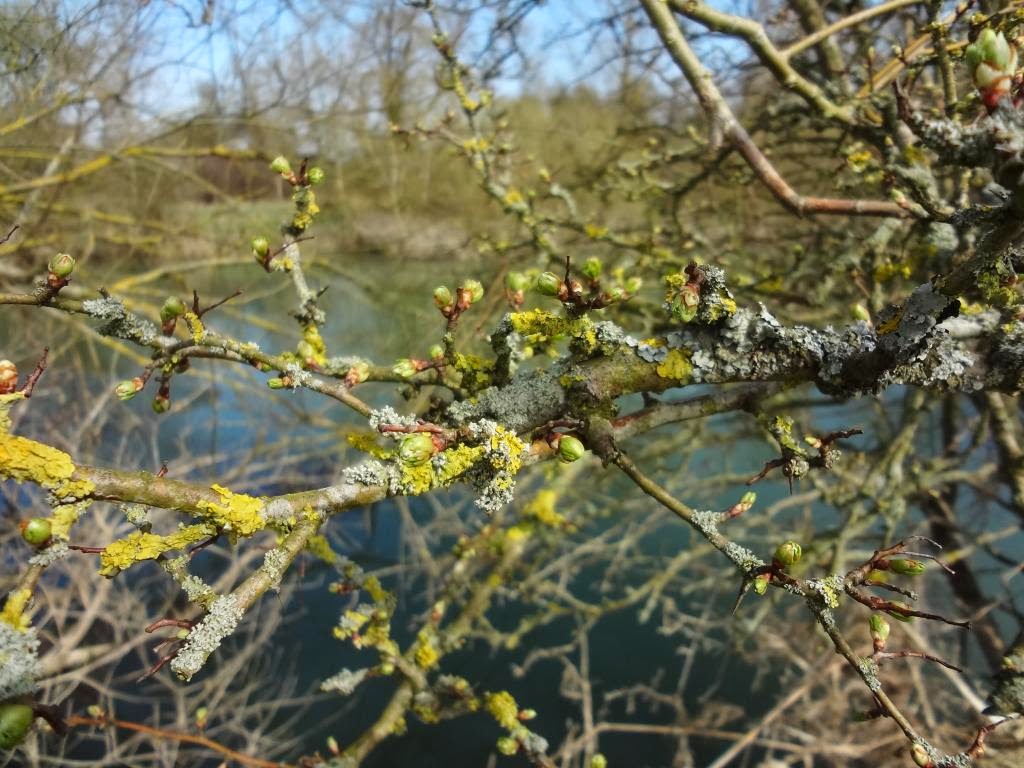 I encountered the poem in this book of Underhill's poetry, which is worth exploring; particularly relevant to this poem are 'The Tree' and 'Primavera'. And this also seems like a good opportunity to link to a Middle English translation of 'Vexilla Regis', by William Herebert, which I posted some time ago. 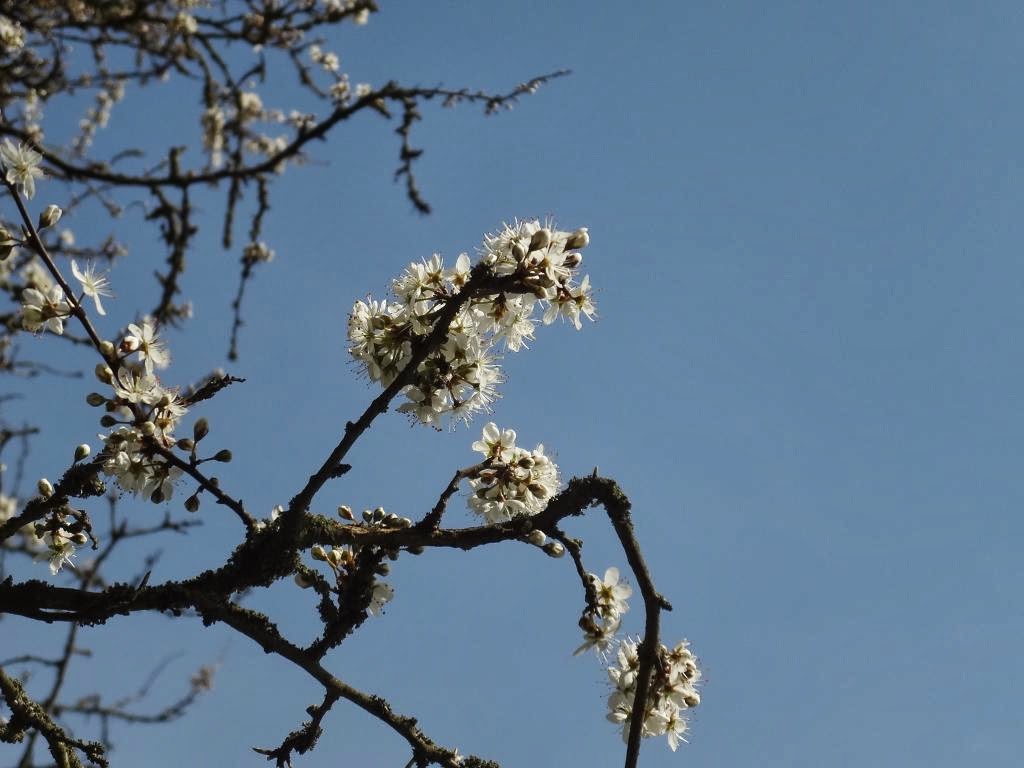 The pictures in this post of budding spring trees were taken yesterday by the Thames at Bablock Hythe.
Posted by Clerk of Oxford at 11:41 pm

Lovely, evocative photos. I was so pleased to see a poem by Evelyn Underhill. Her Mysticism has remained one of my favourite, and most helpful, books. I recently found a book of readings from Underhill for Lent that I have been looking through.
I was so taken with EH's account of St Rose of Lima singing with the birds that I found her convent when I visited Peru in the 1970s.
It was a very different setting from the verdant spot I had imagined; dirty trucks sped past on a dusty road (ot quite the Thames at Bablock Hythe!)but pilgrims still placed small petitions into a grate.

Ah, things like that are never quite as we imagine they will be! (To be perfectly honest, the beauty of the Thames at Bablock Hythe is actually somewhat marred by a large caravan park - but the verdant spots are still there if you go in search of them!) I've only recently begun to explore Underhill's work, but I'm intrigued by what I've read so far.

I'm sure that you'll love Evelyn Underhill's writing: It is surprising how contemporary she still seems, especially in her early work where she has the excitement of a "new world" to convey.