A Visit to Anglo-Saxon Repton 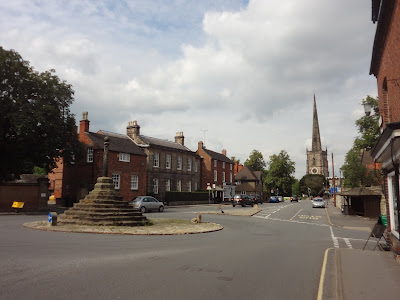 The sharp spire in the picture above belongs to the church of St Wystan at Repton, in Derbyshire. Repton is a fascinating place, whose early history includes such irresistible elements as a murdered Mercian prince, a fearsome Viking leader, St Guthlac, and Cnut - not to mention an extraordinary Anglo-Saxon crypt. 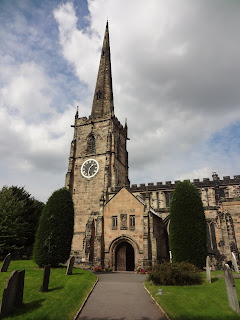 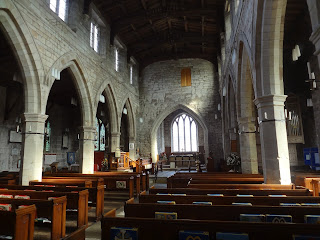 The recorded history of Repton begins in 653, with Peada of Mercia. Bede tells us that Peada was the son of a pagan king, Penda, but accepted baptism as a condition of marrying the daughter of the Christian king of Northumbria. As a result, four missionaries came from Northumbria to spread Christianity in Mercia: Diuma, Adda, Betti, and Cedd. Bede has good things to say about Peada as an eager young Christian king, but his reign ended in 656 - ironically, he was betrayed to his death by the treachery of his wife (according to Bede). However, Christianity flourished in Mercia, and in the reign of Peada's brother, c.660, an abbey was founded at Repton. It was here, in 697 or 698, that a 24-year-old Mercian soldier named Guthlac exchanged military glory for the religious life, and was tonsured by Abbess Ælfthryth. 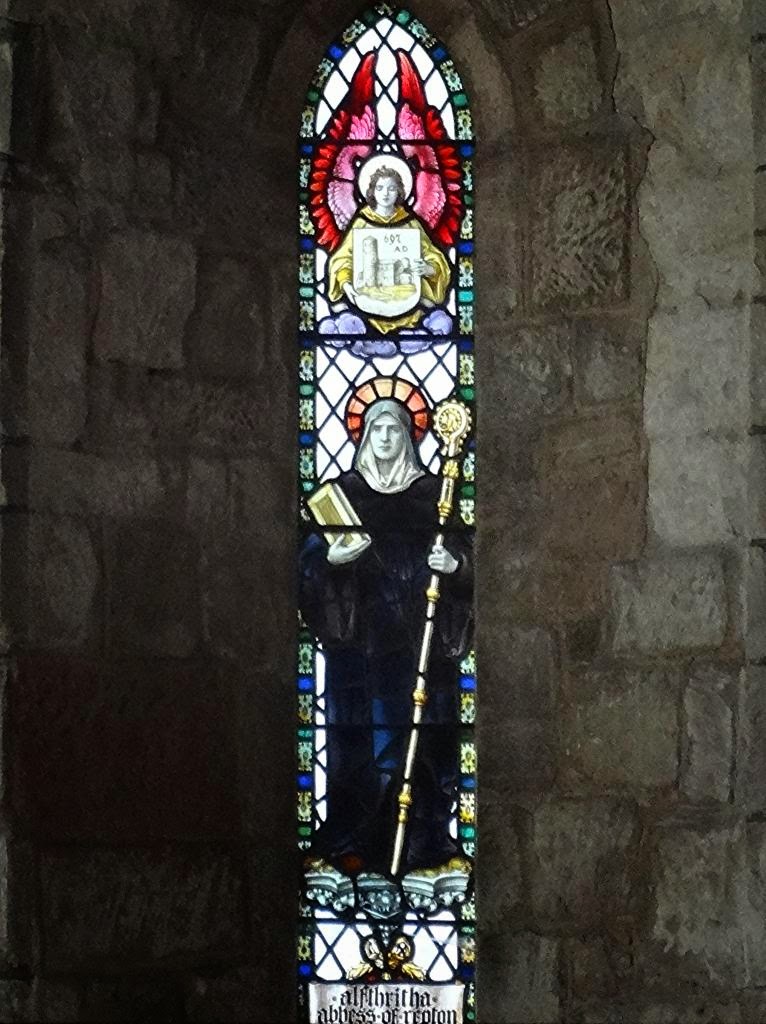 Here's Ælfthryth, commemorated in the church at Repton; the angel's shield bears the date 697.  Guthlac spent two years as a monk at Repton, before choosing the life of a hermit in the wild Lincolnshire fens. It was probably not long after his departure that the most exciting piece of evidence for Repton's Anglo-Saxon past was constructed: its eighth-century crypt. 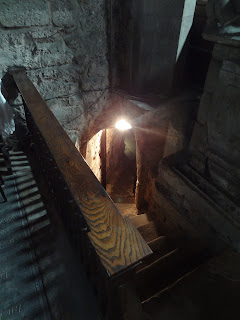 These tantalising steps lead below the east end of the present-day church, on the north side of the chancel. They take you down perhaps twenty steps, and back in time by twelve centuries. 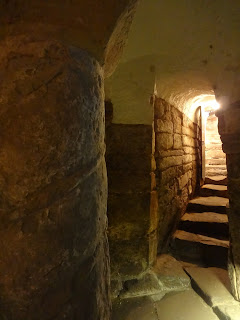 This crypt is an incredible survival, a treasure of Anglo-Saxon architecture - standing in this space is the closest you will ever get to standing in an Anglo-Saxon building. When it was built it was probably intended as a royal mausoleum for the kings of Mercia, and the barley-twist columns are both substantial and elegant. 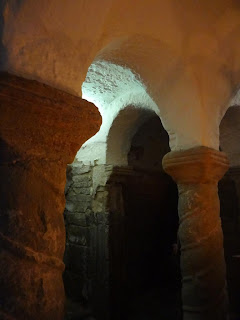 It may once have housed the body of King Æthelbald of Mercia, who as a young man in exile from his kingdom sought St Guthlac's advice at his hermitage in Crowland; here's an image from the 'Guthlac Roll' of Æthelbald consulting Guthlac. Guthlac's support helped Æthelbald regain his kingdom, and after Guthlac's death Æthelbald was one of the first patrons of the hermit's saintly cult. Æthelbald died in 757, and was buried here at Repton; in this crypt we are at the very heart of Mercian royal and spiritual power, inside the shrine of a long-lost kingdom. 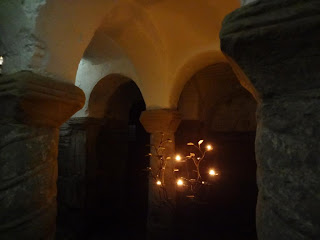 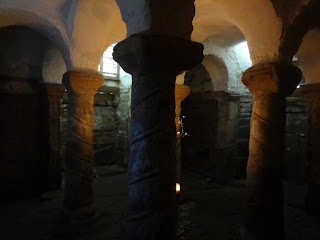 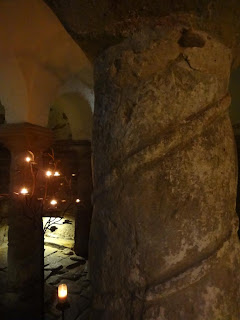 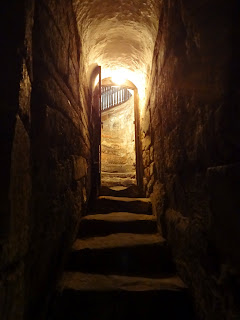 A century after Æthelbald's death, Repton gained its chief saint, young St Wigstan, who died in 849. Wigstan, or Wystan, as it's often spelled today (you may know the name from his most famous namesake, W. H. Auden, who was named after Wystan because his father was educated in Repton), was the son of the king of Mercia, was killed by his kinsman Beorhtfrith and, like many murdered princes and kings, came to be thought of as a martyr and saint. His relics remained at Repton until the eleventh century, when they were removed to Evesham in the reign of Cnut, partly to show royal favour to Evesham, and partly because the church at Repton was by that time in ruins, having never recovered from an earlier Viking attack. (I wrote about about Cnut and Evesham here.) 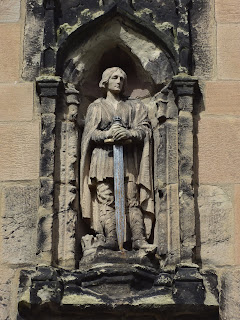 This is Wigstan above the porch at Repton, and here he is beside the altar: 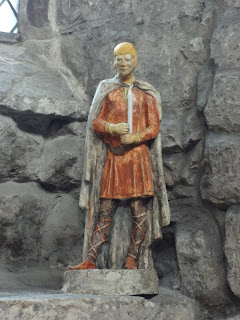 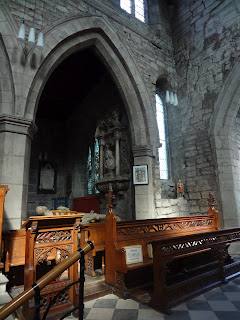 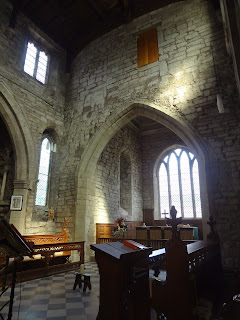 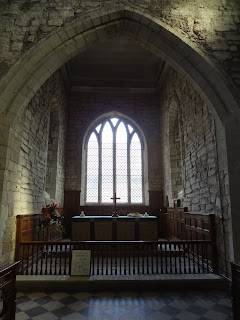 The other people from Repton's Anglo-Saxon story are commemorated in this window: 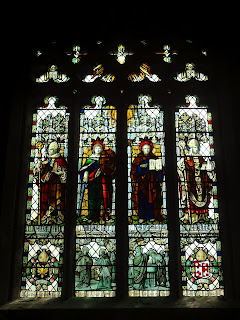 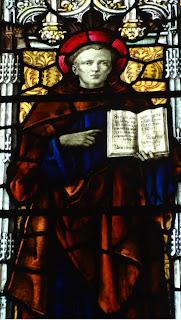 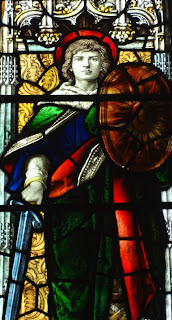 Diuma, one of the missionaries named by Bede: 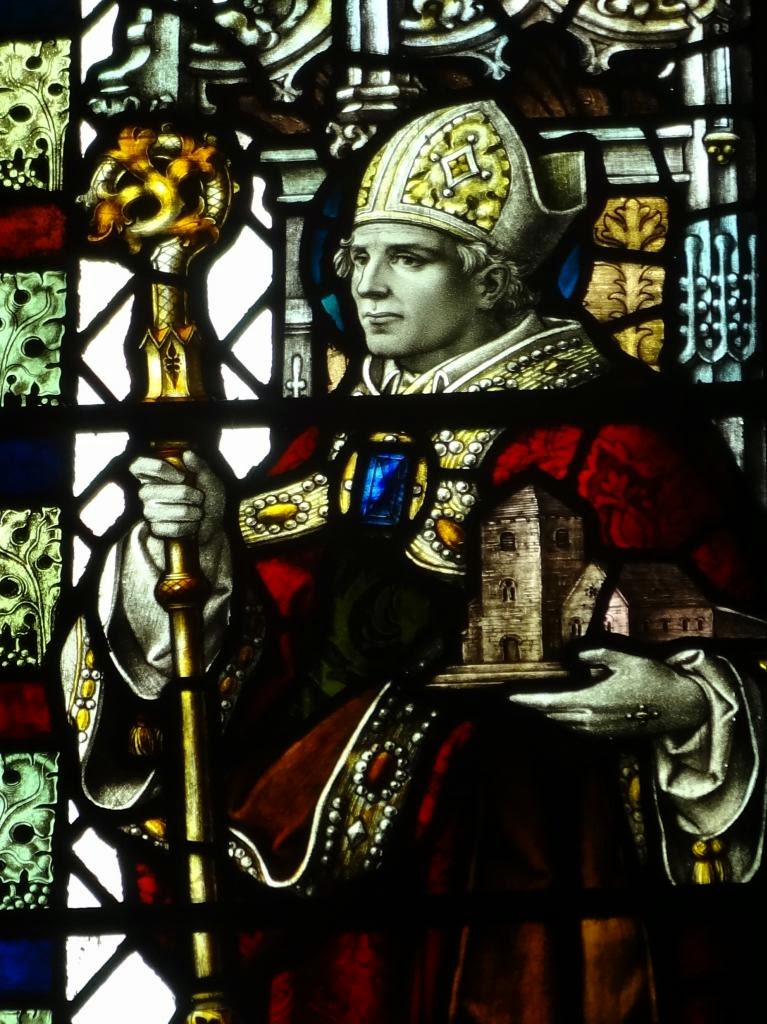 And one of Mercia's most famous saints, Bishop Chad: 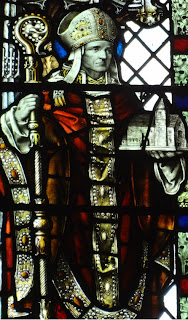 The church website (which is excellent, well worth exploring) informs me that the scenes below depict Guthlac being received into Repton Abbey by Abbess Ælfthryth, and the baptism of King Peada by Bishop Finan of Lindisfarne. 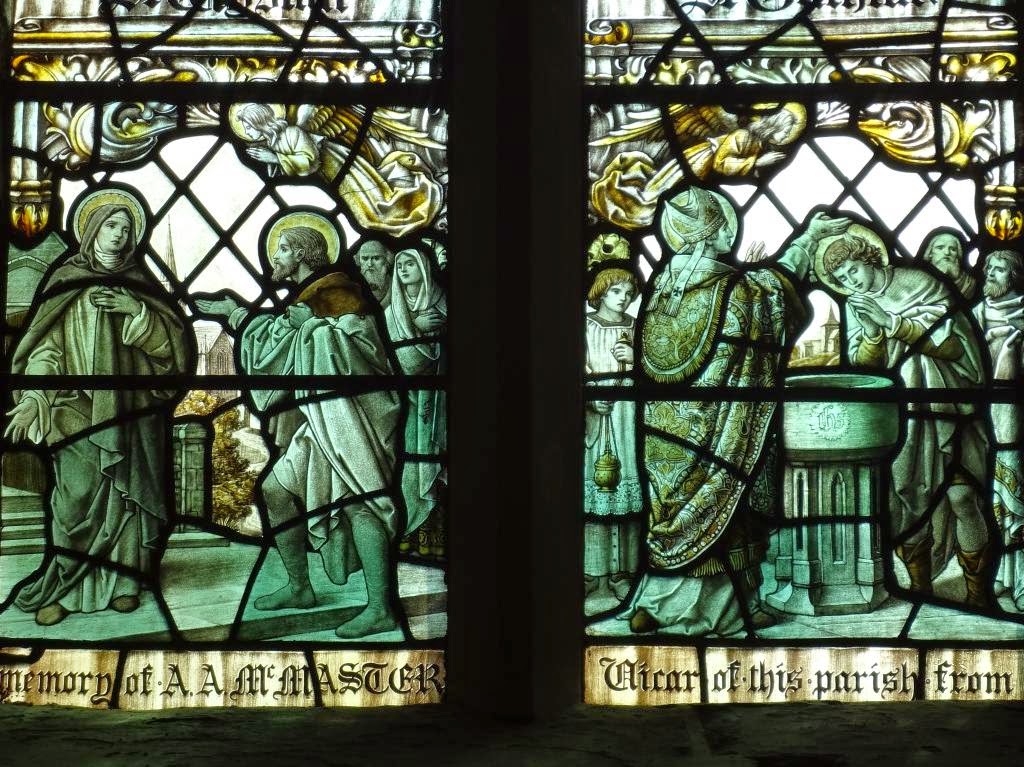 Some people who are most emphatically not commemorated in the church, but are nonetheless an important part of Repton's Anglo-Saxon history, are the Viking warriors who camped at Repton over the winter of 873/4 - not just any Viking army, but the so-called 'Great Heathen Army', led by the sons of Ragnar Loðbrók. The Anglo-Saxon Chronicle tells us that the army spent the winter at 'Hreopedune' while in the process of raiding and conquering every English kingdom except Wessex, and archaeological excavation has found Scandinavian burials here, in the vicinity of the church, and at nearby Ingleby. There's a detailed account of this, with photographs, on the church's website (I can't link to it directly but it's under 'Our Church' and then 'Viking Repton'). It has even been suggested that one of the warriors buried here, in a barrow, may actually be the fearsome leader of the Great Heathen Army, Ivar the Boneless himself. All this plus a Saxon crypt - what more could a medievalist ask for? 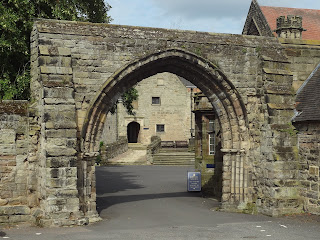 Here in the United states, we are enjoying the mini-series The Vikings -- based on the adventures of Ragnar.

I wish that more people could understand that we have plenty of wonderfully inspiring and courageous historical figures -- we don't need to "create" more.

Thank you for your wonderful discussions about the heroes who came before us.

Thanks for commenting! I'm glad that TV is making Ragnar a popular hero again, as he really should be.

I greatly enjoy your blogs! Every morning I read a few with my morning coffee. I desire to be an academic in a similar field as yourself, and have been considering applying to Oxford for some time now. Thank you for the inspiration, keep up the good work!

Thank you for commenting! I'm glad you enjoy my posts. And I definitely recommend applying to Oxford - there are few better places for a medievalist to be :)

I worked on the dig at Repton in the late 1980s for a few weeks... my guess is that it was the summer of 1986 or 1987 between Fifth and Sixth Form; or between Fourth and Fifth form. We lived in the "new dormitory" at Repton school (built in something like 1760 — it was older than my country, as I recall) and ate in their dining room, and dug in the cloister of the Augustinian Priory and Abbot's Garden.

It was nice to see pictures of the crypt again. Brings back memories!