'It was upon a Sheer Thursday' 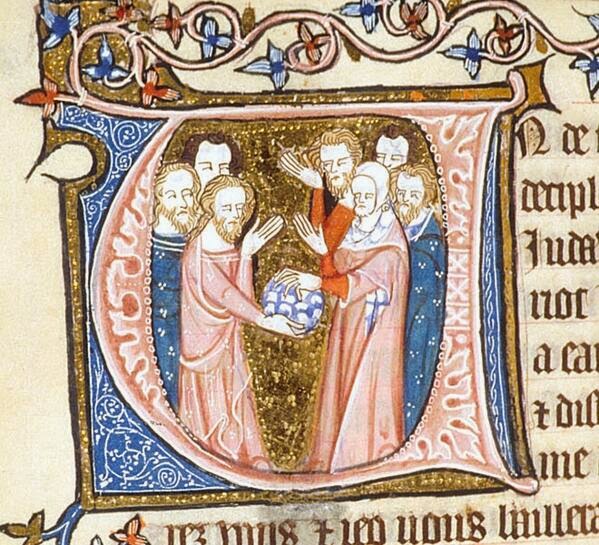 The Wednesday of Holy Week, sometimes called 'Spy Wednesday', is traditionally considered to be the day on which Judas went to betray Christ for thirty pieces of silver. There's a fascinating Middle English poem about Judas' betrayal, dating to the end of the thirteenth century, which gives us an unusual take on the story: Judas is forced into betraying Christ to regain money which has been stolen from him.

The poem tells how Judas is sent by Jesus to buy food for the apostles with thirty pieces of silver, but on the way he meets his sister, who berates him for supporting a false prophet. She lulls him to sleep, and when he wakes up the silver has been stolen. Judas, in despair at having lost the money Jesus entrusted to him, is taken before Pilate, who asks him what it will take to make him betray his lord. Judas says he will never betray Christ, except to regain the thirty pieces of silver. The poem doesn't tell us what happens next - a very pregnant pause - but the scene cuts to Christ and the apostles dining together. Christ tells them that one of them has betrayed him, and Judas denies it. Peter speaks up to deny it too, but Christ tells him "Peter, I know you well; you will forsake me three times before the cock crows". 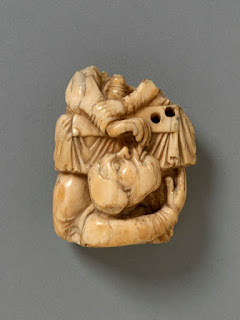 A fragment of a scene showing Judas receiving bread at the Last Supper, carved in walrus ivory
(England, c.1190-1200), now in the V and A

It was upon a Sheer Thursday that our Lord arose,
Full mild were the words he spoke to Judas:
"Judas, you must go to Jerusalem to buy our food;
Take thirty coins of silver to carry on your back.
When you come far into the broad street, far into the broad street,
Some of your kinsmen there you may meet."
He met with his sister, a wicked woman:
"Judas, you deserve to be stoned with stones!
Judas, you deserve to be stoned with stones,
For the false prophet you believe in."
"Be quiet, dear sister - may your heart break!
If my Lord Christ knew of this, he would have his revenge."
"Judas, go to the rock [in Jerusalem], up upon the stone,
Lay your head in my lap; go to sleep now."
As soon as Judas awoke from sleep,
Thirty coins of silver were stolen from him.
He tore his hair until his head was covered in blood;
The Jews of Jerusalem thought that he was mad.
To him came the rich Jew who was called Pilate:
"Will you sell your Lord, who is named Jesus?"
"I will not sell my Lord for any sum of money,
Except for the thirty coins he entrusted to me."
"Will you sell your Lord Christ for any sum of gold?"
"No, except for the coins he wishes to have."
To him came our Lord as his apostles sat at meat.
"Why sit you, apostles, and why won't you eat?
Why sit you, apostles, and why won't you eat?
I am bought and sold today for our meat."
Up stood Judas: "Lord, am I that man?
I was never in the place where evil was spoken of you."
Up stood Peter, and spoke with all his might:
"Though Pilate himself come with ten hundred knights,
Though Pilate himself come with ten hundred knights,
Yet would I, Lord, for your love fight!"
"Be quiet, Peter, well I you know:
You will forsake me three times before the cock crows." 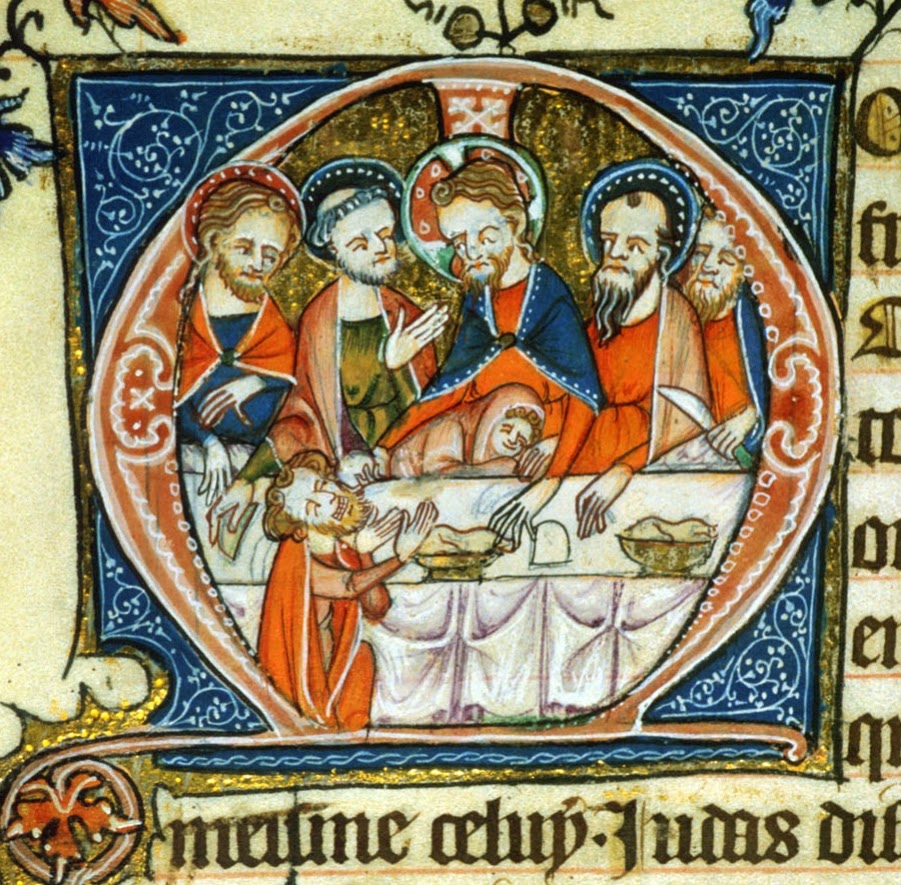 The poem survives in one manuscript, Cambridge, Trinity College B.14.39 (323), a miscellany of texts in English, French and Latin which was made in the second half of the thirteenth century, probably in the West Midlands. It gives us a remarkably sympathetic portrayal of Judas, presenting him as a man torn between Christ and his own family, caught by Pilate's questioning in a difficult and paradoxical position: forced into betraying his lord so as not to betray his lord's trust. This sympathy for Judas is striking, but the poem is not just a literary curiosity; the narrative is swift-moving and dramatic, and poor Judas' confusion, anguish and jittery self-justification come across well. Much of the story is told through dialogue, one of the features which has led to this poem being called 'the first ballad in English' (Child included it in his collection of ballads). Particularly important are the speeches of Christ, who appears as an enigmatic figure, distinguished by his gentleness (he is 'full mild') and by his omniscience: he has three speeches in the poem, each of which reveals that he knows exactly what is happening and is going to happen. He sends Judas out knowing full well that he will meet his hostile relatives, he rebukes Peter, and - after we have left Judas poised at the moment of choosing whether to turn traitor - it is Christ's own words which reveal to the audience what Judas has chosen, when he tells the apostles, with understated irony:

"Why sit you, apostles, and why won't you eat?
I am bought and sold today for our meat."

Meat in Middle English means 'food', not just 'flesh', and there's an unspoken double meaning here. Literally, Christ has been 'sold for our meat' because Judas was going to buy food with the thirty pieces of silver - but a medieval reader would also remember that this meal is the Last Supper, and therefore the institution of the Eucharist, through which Christ himself becomes 'our meat'.

A note on the first line: 'Sheer Thursday' is a common Middle English alternative name for Maundy Thursday (the MED entry for 'Sheer Thursday' can be found here). Sheer comes from ME skere, a loanword from Old Norse meaning 'innocent, pure, bright, cleansed from sin', and the OED speculates that the name "appears to have been applied to Maundy Thursday with allusion to the purification of the soul by confession, and perhaps also to the practice of washing the altars on that day". To which I would add that Maundy Thursday is also the day on which altars are stripped and on which feet are washed, both practices of ritual cleansing which make things skere. But that's for tomorrow. 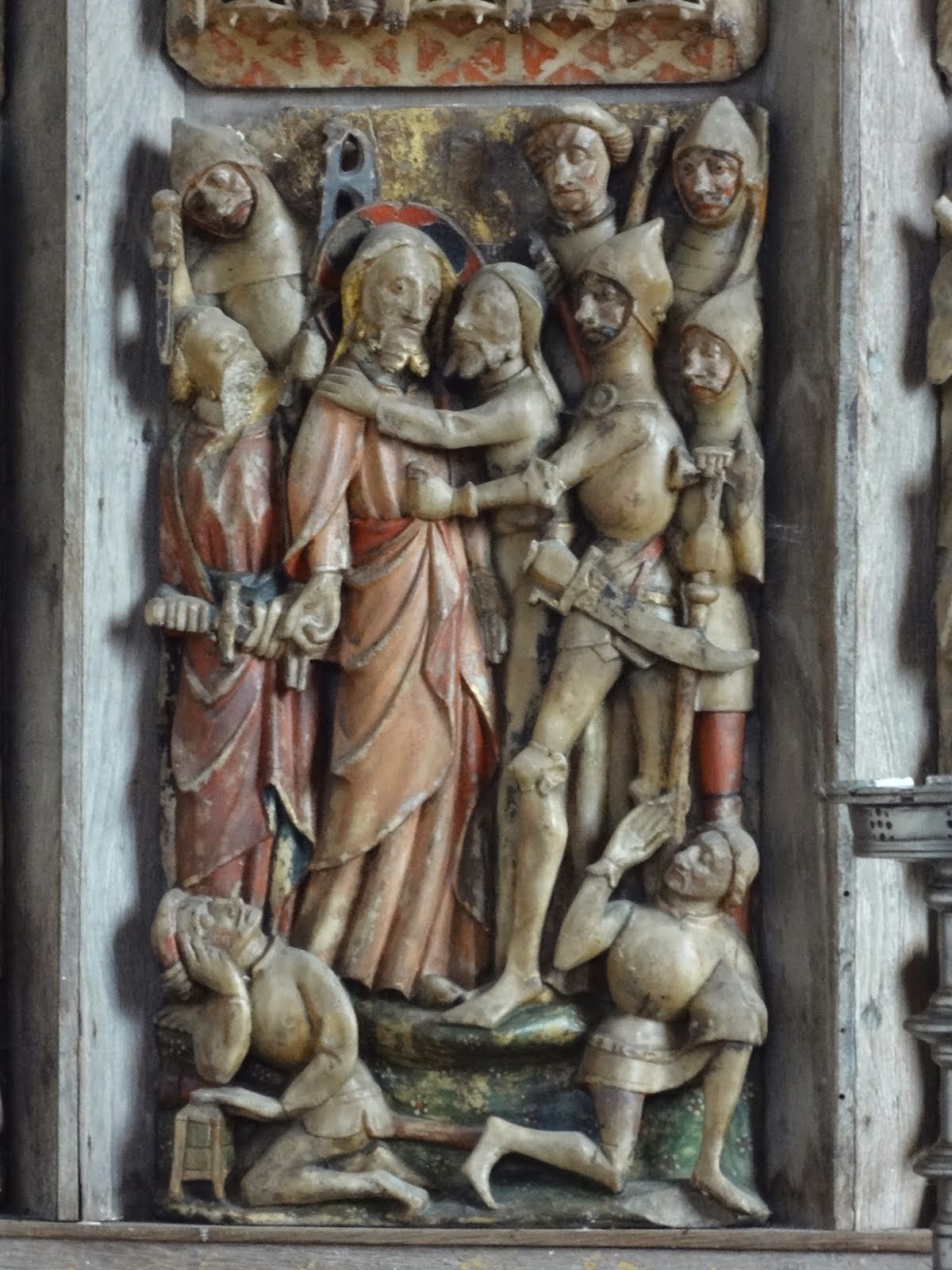 The arrest of Christ, from Haddon Hall
Posted by Clerk of Oxford at 2:28 pm

Some discussion suggests that Judas's sister is his lover (cf. use of suster in Chaucer) and that is why he is so easily lulled ...

Fascinating thank you for the translation.