Words for the distribution of ashes, in the 11th-century Canterbury Benedictional (BL Harley 2892, f.37)

In a homily included among his Lives of Saints, Ælfric describes for us what Ash Wednesday looked like in England at the end of the tenth century:

On that Wednesday, throughout the world,
as it is appointed, priests bless
clean ashes in church, and then lay them
on people's heads, so that they may remember
that they came from earth and will return again to dust,
just as Almighty God said to Adam,
after he had sinned against God's command:
'In labour you shall live and in sweat you shall eat
your bread upon the earth, until you return again
to the same earth from which you came,
for you are dust, and to dust you shall return.'
This is not said about the souls of mankind,
but about their bodies, which moulder to dust,
and shall again on Judgement Day, through the power of our Lord,
rise from the earth, all who ever lived,
just as all trees quicken again in the season of spring
which were deadened by the winter's chill.

The rest of the sermon can be read here. It's tempting to suggest that an Anglo-Saxon listener would hardly need reminding that 'þu eart dust and to duste gewendst': it is, in one form or another, the theme of much of the best poetry in Old English. The greatest Old English poem ends with a funeral, Beowulf burned to ashes on his funeral-pyre, and his treasure mouldering in the barrow; we are never allowed to forget that even the most heroic will end up like Byrhtnoth, the valiant Essex nobleman who in death becomes, in The Battle of Maldon's brutal half-line, god on greote: 'a good man in the dirt'.

But there's something else going on in Ælfric's lines too. The comparison he draws in the last two lines quoted above depends on the fact that in Old English 'Lent' meant spring generally, as well as a particular church season - the word is probably related to the 'lengthening' of the days. So Ælfric can say that souls revive as trees quicken with life on lenctenes timan, in the season of spring/Lent. In Old English poetry the quickening effect of spring is most powerfully evoked in The Seafarer, where it inspires the speaker's restless spirit:

The woods take on blossoms, towns become fair,
fields grow beautiful, the world hastens on;
all these things urge on the eager mind,
the spirit to the journey, in one who thinks to travel
far on the paths of the sea.
The cuckoo too gives warning with mournful voice,
summer's watchman sings, foretells sorrow,
bitter in the heart. Of this that man knows nothing,
the warrior blessed with wealth, what some endure
who furthest tread the paths of exile.
And so now my spirit roams beyond the confines of the heart,
my spirit over the sea-flood;
it wanders wide over the whale's home,
the expanse of the earth, and comes back to me
eager and greedy; the lone flier cries,
incites the heart to the whale's way, irresistible,
across the ocean's floods. And so to me
the joys of the Lord are warmer than this dead life,
lent on land.

In this short extract, less than twenty lines out of a 125-line poem, there's material for a hundred sermons. As the trees blossom and the world onetteð, 'hastens, speeds up' - 'quickens' is an appealing translation - the spirit itches to be abroad, pressed on by a sense of time passing and the world in motion. The tone of these lines is urgent and forceful: the voice of the cuckoo warns, impels, incites (hweteð) the spirit onward (because 'so priketh hem Nature in hir corages', to mix medieval spring poems), and the wandering mind, like a flying sea-bird, roams unchecked through the wide expanse of the earth.

The Seafarer gives voice to the thoughts of a sailor, a pilgrim of a kind, who renounces the comforts and pleasures of life on land for the hardships of a sea-journey. He begins by describing past journeys he has endured, cold, lonely, and comfortless, but when the spring comes he is nonetheless impelled to set forth again: he puts out into the deep, seeks the 'land of strangers' across the whale's way (hwælweg). He is voluntarily going into exile, into the wilderness; the sea may be the whale's home (hwæles eþel), but it's not his. Over the course of the poem it becomes clear that his journey is the life of the penitent Christian, who forsakes the pleasures of earth in hope of the joys of heaven. What he leaves behind, earthly comfort and human companionship, might seem to be happiness but it is not, as many a medieval poet will tell you, lasting or safe: it is 'þis deade lif, læne on londe'. A common word in Old English poetry, læne means 'temporary, transitory', but more literally 'lent' - a loan, which must be paid. 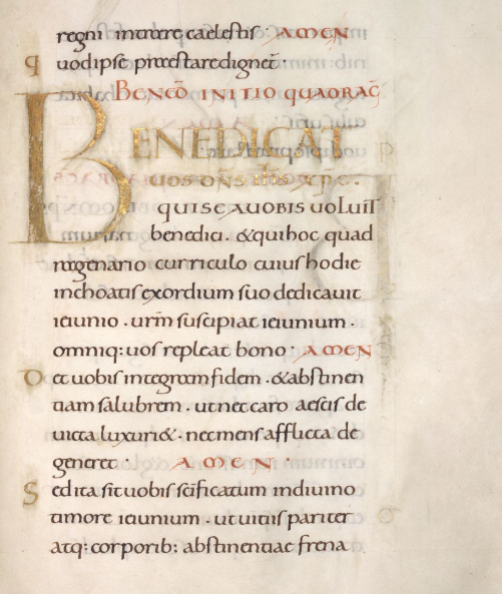 Blessing for the beginning of Lent in the Benedictional of St Æthelwold (BL Additional MS. 49598, f.41r)
Posted by Clerk of Oxford at 12:57 pm

The sea versus the land is a powerful analogy of a theme that I have copied onto a card from a Lenten sermon of St. Leo the Great:

"And thus is perfectly fulfilled that assurance of the truth, by which we learn that "narrow and steep is the way that leads to life;" and whilst the breadth of the way that leads to death is crowded with a large company, the steps are few of those that tread the path of safety. And wherefore is the left road more crowded than the right, save that the multitude is prone to worldly joys and carnal goods? And although that which is desired is short-lived and uncertain, yet men endure toil more willingly for the lust of pleasure than for love of virtue. Thus while those who crave things visible are unnumbered, those who prefer the eternal to the temporal are hardly to be found." On Lent, XI, Leo the Great (whose Nativity, Lenten, and Passion sermons are powerful and pure).