The Death of Edmund Ironside 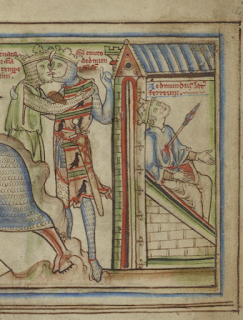 On this day in 1016 Edmund Ironside died, after just seven months as king of England. After the death of his father Æthelred on St George's Day 1016, he had inherited a kingdom half-overrun by a Danish army, and he spent most of his reign fighting Cnut and the Danes for control of England. The last battle was fought at Assandun on 18 October 1016, after which Edmund and Cnut reached a peace-treaty and agreed to divide the kingdom - so at the time of his death Edmund was king only of Wessex, while Cnut held what the Anglo-Saxon Chronicle calls the norðdæle, the northern part of England. Following Edmund's death, as the peace-treaty may have arranged, Cnut became king of the whole country, and went on to rule it for nearly twenty years.

The Anglo-Saxon Chronicle only observes that Edmund died on St Andrew's Day and was buried with his grandfather, King Edgar, at Glastonbury. It gives no details as to the location or manner of his death, and later sources provide varying information on both. Some sources say he died in Oxford (which was near the northern border of his much-diminished kingdom), others in London (then occupied by Danish ships). We don't know the cause of his death, and it may well have been from natural causes: he died at the end of a year of almost continuous warfare, just six weeks after a heroic performance at the Battle of Assandun, so it's very possible he succumbed to an existing wound.

But this simple explanation seems not to have appealed to contemporaries or to later medieval historians. Within a few decades (and perhaps from the first) his death was being blamed on Eadric streona, one of his commanders, a Mercian ealdorman of impressively fluid loyalties. Eadric had betrayed Edmund in the past, and switched allegiance between the Danes and the English and back again more than once in the years before Edmund's death. The Anglo-Saxon Chronicle regularly highlights his betrayals, and post-Conquest sources blackened his already pitch-black name by crediting him with a whole range of extra crimes, including but not limited to the St Brice's Day Massacre, the murder of Svein Forkbeard's sister Gunnhild, the death of St Ælfheah, the English defeat in more than one battle against the Danes, and the murder of Edmund. The twelfth-century historians are pretty well agreed that Eadric was largely to blame for the Danish Conquest, and if they could have found some way to blame the Norman Conquest on Eadric, they would probably have done that too.

Perhaps surprisingly, no English sources cast suspicion on Cnut or suggest he was involved in his rival's death - quite the opposite, in fact. Cnut was not above executing political opponents (including one of Edmund's brothers, and his own brother-in-law) so it would hardly have been out of the question, and some late Scandinavian sources have no doubt Cnut was responsible. The English historians, however, tell a very different story. The treaty made between Cnut and Edmund, illustrated by their kiss of peace in the thirteenth-century manuscript above, had made them 'partners and pledged-brothers' (feolagan 7 wedbroðra), and William of Malmesbury says that Cnut continued to refer to Edmund as his brother; he even visited Edmund's grave at Glastonbury on the anniversary of his death and presented a rich cloak decorated with peacocks at his tomb.

Many later sources go even further, and say that Cnut was not only saddened by his opponent's death, but took it upon himself to avenge Edmund. The earliest incarnation of this story occurs in the Encomium Emmae Reginae, whose author derived much of his information (and surely this story) from members of the Anglo-Danish court of Cnut's son, Harthacnut. It is cited as evidence that Cnut was 'as yet in the flower of youth, but was nevertheless master of indescribable wisdom':


It was, accordingly, the case that he loved those whom he had heard to have fought previously for Eadmund faithfully without deceit, and that he so hated those whom he knew to have been deceitful, and to have hesitated between the two sides with fraudulent tergiversation, that on a certain day he ordered the execution of many chiefs for deceit of this kind. One of these was Eadric, who had fled from the war, and to whom, when he asked for a reward for this from the king, pretending to have done it to ensure his victory, the king said sadly: "Shall you, who have deceived your lord with guile, be capable of being true to me? I will return to you a worthy reward, but I will do so to the end that deception may not subsequently be your pleasure." And summoning Eiríkr, his commander, he said: "Pay this man what we owe him; that is to say, kill him, lest he play us false." He, indeed, raised his axe without delay, and cut off his head with a mighty blow, so that soldiers may learn from this example to be faithful, not faithless, to their kings.

It's tempting to see this bit of grim wordplay as some classic Viking black humour: Eadric gets his 'reward', but not the reward he was expecting. Cnut did indeed have Eadric killed in 1017, probably not quite as flamboyantly as this - but this sounds to me like the kind of story which might have been in circulation at court, and it might well have some origin in fact. From the twelfth century onwards, historians elaborate not only as to the nature of Eadric's punishment but the manner of poor Edmund's death. Here's Henry of Huntingdon's version, with some even better wordplay:

When [Edmund], fearful and most formidable to his enemies, was prospering in his kingdom, he went one night to the lavatory to answer a call of nature. There the son of Ealdorman Eadric, who by his father's plan was concealed in the pit of the privy, struck the king twice with a sharp knife in the private parts, and leaving the weapon in his bowels, fled away. Then Eadric came to King Cnut and saluted him, saying, ‘Hail, sole king!’ When he disclosed what had happened, the king answered, ‘As a reward for your great service, I shall make you higher than all the English nobles.’ Then he ordered him to be beheaded, and his head to be fixed on a stake on London’s highest tower.

'Higher', get it? Justice with a pun. This story, puns and privies and all, is actually quite a restrained version: as time went on, other medieval historians added lurid details about some kind of bizarre privy-based stabbing machine which Eadric used to kill Edmund, yet more puns about reward/debt/being made 'highest', and Cnut throwing Eadric into the Thames with a catapult. See, and you thought medieval history was boring. 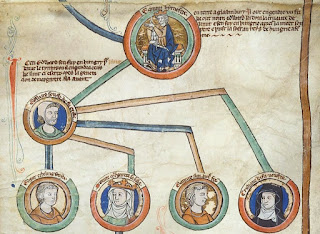 Anyway, we will piously hope that this was not actually how Edmund Ironside, valiant scion of the great kings of Wessex, really met his untimely end. Whatever vengeance Cnut may or may not have enacted on his behalf, history did bring him a measure of justice. At the time of his death, he had two infant sons by his wife Ealdgyth. They were taken out of the country, and grew up in exile. One of them married a Hungarian princess and by her became the father of three children, including Margaret of Scotland; and her daughter, in 1100, married Henry I, thus grafting the line of the Anglo-Saxon kings back into the royal family tree. So it's through Edmund Ironside, though only seven months' king, that the English monarchy can today claim descent from the kings of Wessex.
Posted by Clerk of Oxford at 1:34 pm