An Anglo-Saxon Prayer to St Alphege 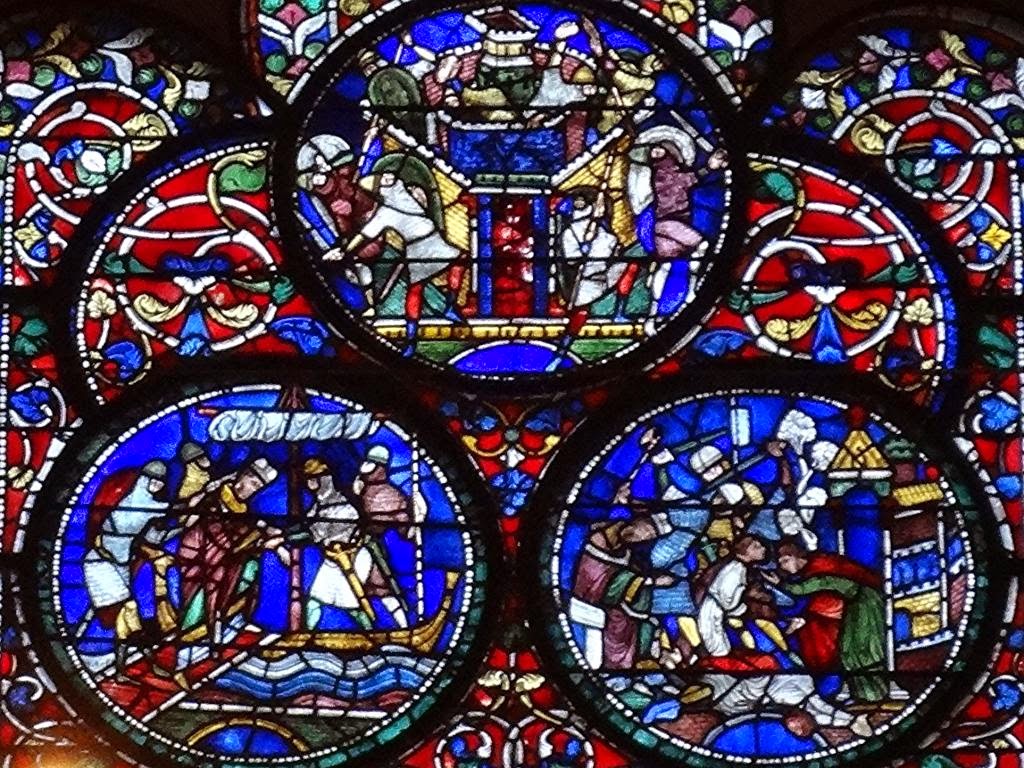 16 November is a feast shared by two medieval English saints: St Margaret of Scotland, one of my favourites, and Oxford's own St Edmund Rich. But before it was their feasts - in fact, before either of those people was born - today was kept in eleventh-century Canterbury as the feast of the ordination of St Alphege. By the middle of the eleventh century the recently-martyred archbishop Alphege already had two perfectly good feasts, in April and in June (his death and translation, respectively), but when you have such a martyr to commemorate you can hardly go overboard, I suppose. Eleventh-century Canterbury, especially during the reign of Edward the Confessor, was not so secure that it could afford to neglect its heavenly patrons. The ordination feast was probably introduced some time between the return of Alphege's body to Canterbury in 1023 and the Norman Conquest; it might be a legacy of Archbishop Æthelnoth the Good, who was responsible for bringing Alphege's relics back to the city he had left in 1011 as the prisoner of a Viking fleet.

In the middle years of the eleventh century, some prayers for a variety of purposes were added to a splendid Psalter which had been made at Canterbury c.1012-23, which is now British Library, Arundel 155. These prayers, some 44 of them, are in Latin with an interlinear Old English gloss. They've been published in two batches, the first group by Ferdinand Holthausen in 'Altenglische Interlinearversionen lateinischer Gebete und Beichten', Anglia 65 (1941), 230-54, and the rest by Jackson J. Campbell in 'Prayers from Ms. Arundel 155' Anglia 81 (1963), 82-177. Among these prayers are two addressed to Canterbury's chief saints, Dunstan and Alphege, and since I'm working on these saints at the moment I've made a translation of these prayers for my own use. I thought for St Alphege's (third) feast-day I'd post my translation of the prayer to the saint, though for the Latin and English text you'll have to search out Campbell's article. This prayer appears in ff. 186-7 of the manuscript, pp. 95-9 in Campbell.

There's one particularly interesting thing to note about this prayer. The name Alphege was naturally left untranslated by the person who made the Old English gloss, but more than a century later another hand came along and updated the prayer to adapt it for Canterbury's newest martyr - every instance of Alphege in the Latin was glossed instead with Thoma, for Thomas Becket. Becket himself apparently endorsed such a parallel between himself and the Anglo-Saxon martyr, when he spoke about Alphege in the sermon he preached on Christmas Day 1170, four days before his own martyrdom: "You already have a martyr here," he said, "Alphege, beloved of God, a true saint. The Divine Mercy will provide another for you; it will not delay." After Thomas' death it would have seemed natural to the monks to link Canterbury's two martyrs by reusing a prayer to the earlier saint. So this is a multi-purpose prayer, and a good example of an Anglo-Saxon manuscript which continued to be in use for a long time after its English glossing would have become archaic.

My thoughts and my desires I make known to you in sorrow and anguish, beloved of God, holy father Alphege. I wish that I could express with mouth or lips how in my inmost heart I pour out prayers to God and to you, and crave merciful pardon from God through your intercession. I know myself to be guilty, gracious father Alphege, and my sins to be more numerous than I can bring to mind or count. To God and to you I confess, therefore, all my life's deeds, which are known to God, and which I cannot conceal or amend, if not for the grace of God and, St Alphege, your interceding mercy.

Holy father Alphege, wicked is my life in the sight of God, stained is my soul with wrongful thoughts and all vices of sins, at the guilt of which my own conscience is offended. Far from me are truth and mercy, if it were not that he, the Saviour of mankind, coming down from the heavens, forbade despair and promised forgiveness to sinners. Long ago he would not suffer delays in the destruction of my weakness, that I fall not into despair. But because it is good to hope in the Lord, and blessed are all they who trust in him, with mind and with body, prostrate before God and you, with humble devotion I crave your merciful protection, holy father Alphege, that, with strength and honour greatly shining forth on earth, through your intervention in heaven you reconcile me, your servant, with God, and redeem me from all sins by your gracious intercession. O noble father Alphege, jewel of bishops and glorious beauty of Christ Church, hear sinful me humbly praying to you, and unceasingly plead for my offences to the blessed Saviour. Holy father Alphege, implore the Lord that he keep far from wretched me sinful lusts and wicked desires, and turn wrongful thoughts away from me, and deliver me from every pollution of the devil and his ministers, that I may become worthily pleasing to God, and fittingly perform this with all love for God and for you.

I pray also through you, holy father Alphege, to all the blessed host of saintly martyrs, who by their steadfast faith and shedding of their blood have achieved heavenly rewards, that supported by the protection of so many saints in this present life I may leave and shun all things which are harmful to the body and the soul, and love Christ entirely with a pure mind, and steadfastly endure in the Lord's commands. And, thus enduring, intercede for me, holy father Alphege, that Christ the Lord may grant that I may deserve to come to eternal bliss, where health, life and joy endure for all those beloved of God, through all ages of ages. 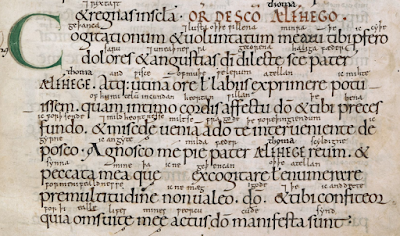 I particularly like the last section here, where the petitioner asks for grace to steadfastly perseverare 'endure, continue' in God's commands (þurhwunian is the Old English word), so that he may come to the place where salus, vita et felicitas (hæl, lif and gesælhþ) perseverat, þurhwunaþ, endure for ever.

Here's a flavour of one of this prayer's elegant sentences, first in Latin:


And in Old English (bearing in mind it's a gloss, so the word order is determined by the Latin): 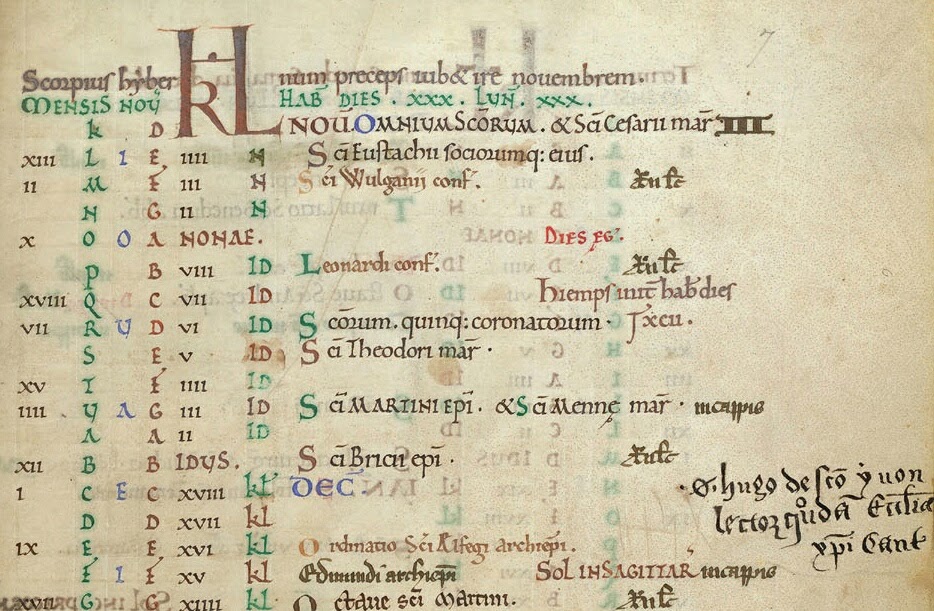 Calendar for November in Arundel 155, f. 7, showing the feast of the ordination of St Alphege

By way of comparison, this is the prayer to St Alphege with which Osbern concludes his Life of the saint.

Alphege, great soldier of a great King, who washed your robe in the blood of Almighty God, accept the prayers of the sons who cry to you, and by your gracious intercession raise up those whom you have honoured by your holy Passion. Made strong by divine assistance, you overcame the prince of death; father, strengthen us against him, and help us to vanquish him. You had mercy on those who stoned you; have mercy on those who pray to you, that the fury of those who rave may not gain more than the devotion of those who love. Do not let your servants know the gates of death and hell, but bring them to the gates of Paradise through the power given to you by the Saviour, who lives and reigns together with the eternal Father and co-eternal Spirit, the one, only, true God, through endless ages of ages. Amen.