'Now a pure and holy time draws near': Ælfric's Sermon for Quinquagesima 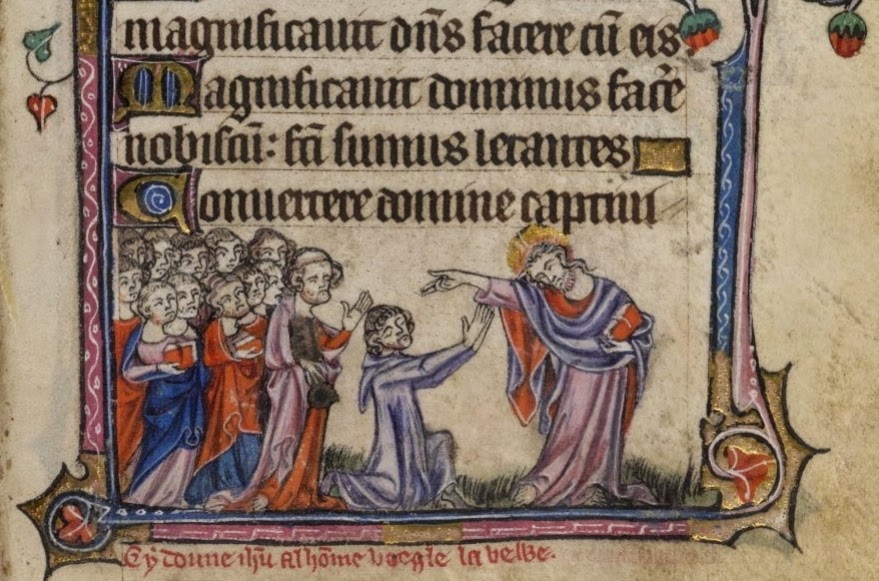 Some extracts from Ælfric's sermon for Quinquagesima, the Sunday next before Lent. He begins, as is his usual practice, by translating into English the Gospel reading for the day; in this case it's Luke 18:31-43, in which Christ speaks of his death to come and heals a blind man.


'Here it is read in the gospel, which we heard just now from the deacon's mouth, that the Saviour took his twelve disciples apart and said to them, "Behold, we shall go to the city of Jerusalem, and then all the things which were written about me by the prophets shall be fulfilled. I shall be betrayed to the Gentiles, and they shall mock me, and scourge me, and afterwards kill me, and I shall rise from death on the third day." His disciples did not understand the meaning of these words. Then it happened that they came near to a city which is called Jericho, and a certain blind man sat there beside the road; and when he heard the passing of the people with the Saviour, he asked who went past there. They said to him that the Saviour was passing. Then he began to cry out, and said, "Saviour, Son of David, have mercy on me!" The men who were going in front of the Saviour chided the blind man to make him keep quiet. He cried much louder then, "Saviour, Son of David, have mercy on me!" Then the Saviour stopped, and told them to lead the blind man to him. When he came near, the Saviour asked him, "What do you want me to do for you?" He said, "Lord, that I may see." And the Saviour said to him, "Look now: your faith has healed you." And he immediately saw, and followed the Saviour, and glorified him. Then all the people who saw that miracle glorified God with great fervour.

The beginning of this gospel touched on our Saviour's passion, though he did not suffer at this time; but he wanted to make known his suffering to his disciples, from afar and long before, so that they would not be too afraid at his suffering, when the time came that he chose to suffer. Their minds were afraid at Christ's saying, but he encouraged them again by the words he spoke: "I will rise from death on the third day." Then he wanted to strengthen and confirm their faith with miracles. And they came then to the place where the blind man sat beside the road, and Christ healed him in the sight of all the multitude, so that by that miracle he might bring them to faith.

But the miracles which Christ worked manifested one thing by power, and betokened another thing by mystery. He worked those miracles, truly, through divine power, and with those miracles confirmed the people's faith; but yet there was another thing hidden within those miracles, in a spiritual sense. This one blind man betokened all mankind, who were blinded through Adam's sin, and thrust from the joy of Paradise and brought to this life, which is likened to a prison. Now we are shut out from the heavenly light, and we may not, in this life, enjoy the eternal light; nor do we know any more of it than we read in books, through Christ's teaching. This world, though it may at times seem pleasant, is really no more like the eternal world than a prison is like the bright day. All mankind, as we said before, were blinded with lack of faith and error, but through Christ's coming we were snatched up out of our errors and enlightened by faith. Now we have the light in our minds, that is Christ's faith; and we have a hope of the joy of everlasting life, though we still dwell bodily in our prison.

The blind man sat at the city which is called Jericho. Jericho is interpreted and called 'moon'. The moon both waxes and wanes: for half the month it is waxing, for half it is waning. Now the moon betokens our mortal life and the decay of our mortality. At one end men are born, at the other they depart. When Christ came to the city of Jericho, which betokens the moon, the blind man received sight. That is, when Christ came to our mortality, and assumed our human nature, mankind was enlightened, and received sight...

The blind man did not pray for gold, or silver, or any worldly thing, but prayed for his sight. He did not think anything worth praying for except sight, because though the blind man may possess something, without light he cannot see what he has. Let us then imitate this man, who was healed by Christ, both in body and in soul: let us pray not for false riches, nor for transitory honours, but let us pray for light from our Lord; not for the light which will be ended, which will be driven away with the night, which is common to us and beasts, but let us pray for the light which we and the angels alone may see, which will never be ended. To that light, truly, our faith will bring us, as Christ said to the blind man: Look now, your faith has healed you.' 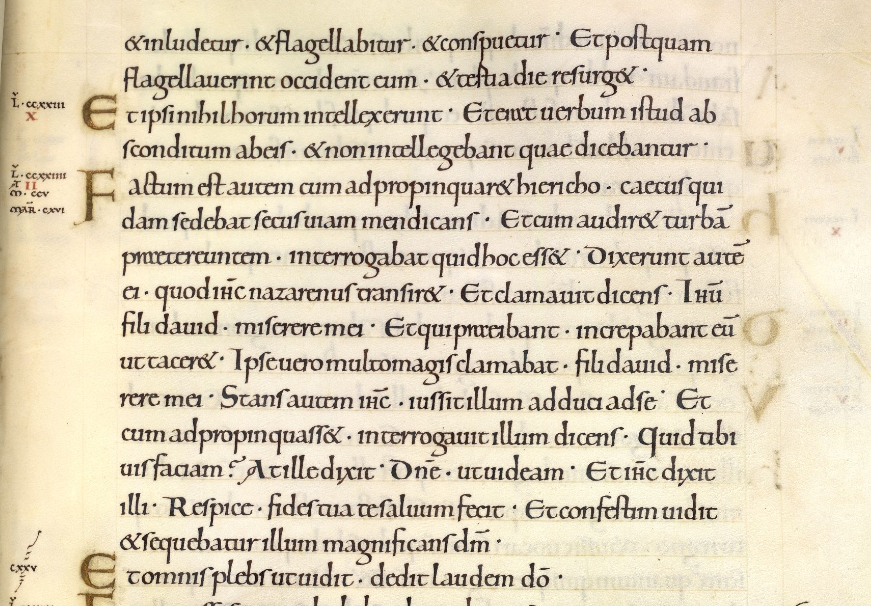 Read the rest here. There's a brief digression into that favourite theme of Anglo-Saxon writers, exile and the heavenly homeland:

'This world is not our homeland, but our exile-journey; so we should not set our hope on this untrustworthy life, but should hasten with good merits towards our homeland, for which we were created - that is, towards the heavenly kingdom.'

And he concludes by saying:


'Now a pure and holy time draws near, in which we should atone for our neglect. Every Christian, therefore, should come to his confession and confess his hidden sins, and amend according to the guidance of his teacher; and let everyone encourage each other to good by good example, so that all people may say of us what was said of the blind man when his eyes were enlightened: that is, All people who saw that miracle praised God, who lives and reigns forever without end. Amen.'

It was the custom described in this last paragraph, of preparing for Lent by going to confession (scrift), which later led to these three days before Ash Wednesday being known as Shrovetide. On the one hand, this three-day period was a time for the kind of devout preparations Ælfric describes here, in order to start off Lent in a good spiritual state. At the same time, at least by the later Middle Ages, it was also a period of last-chance merrymaking and revelry before the soberness of Lent: a carnival of Shrovetide games, riotous plays, and eating up the rich food which would be off the menu until Easter. Hence, of course, pancakes.

For Ælfric's homily for Ash Wednesday, see this post. 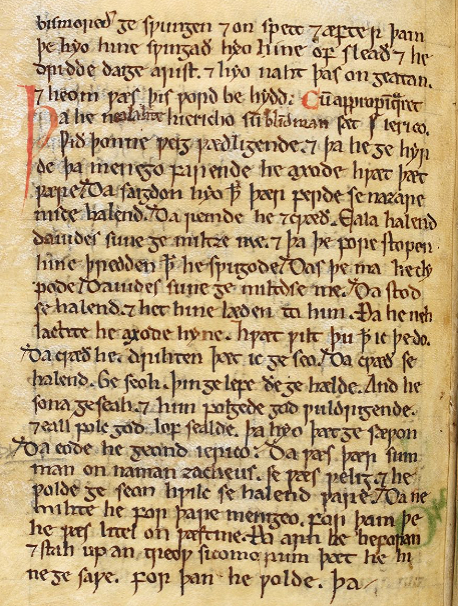 The story of the blind man in an Old English translation of the Gospel of Luke
(BL Royal MS 1 A XIV, f. 120v)
Posted by Clerk of Oxford at 9:46 am

What a beautiful sermon. Thanks for the translation!

I love "leorningcnihtas" = "disciples". A new movement; The Knights of Learning!

That's one of my very favourite Old English words :D

I was enjoying - and wondering about - that 'cnihtas', too.

In English (Standard, anyway: I'm no dialectologist!) the 'knight'= 'Latin 'miles' sense is all that has survived.

That is not true of other modern Germanic languages, where 'miles' = 'Ritter' (German)/'ridder'(Dutch, Danish, Norwegian) /'riddari' (Icelandic)/ 'riddare' (Swedish), while the 'chiht'-analogues (where they survive) have some (of the) other sense(s).

Can we see when that sort of specialization occurred in English? Conversely, could Alfric's sermon have conjured up in any contemporary hearer's mind a picture of the disciples as a byrnied warband?

Clerk of Oxford; Thank you for making the effort and taking the time to post these writings. Our medieval predecessors may have been more enlightened than we realize. Again, thank you.

Old Mertonian - no; 'cniht' in Old English usually means 'boy, young man', and thus 'servant, attendant', but not 'warrior'. That's a development which seems to have taken place late in the eleventh century.