'Hoard up your goldhoard in heaven'

Blogging will be light here for a little while, though if you should be so inclined you can read something I wrote this week for the BBC History website here (if nothing else, it features the most insanely colourful Vikings you'll ever see). Today I want to post just a very short extract from one of Ælfric's sermons for the first Sunday in Lent. He begins by saying:

Dearest people, you all know that the cycle of the year now brings to us the pure season of the Lenten fast, during which we should confess our negligence and transgressions to our spiritual confessor, and by fasting and vigils and prayers and almsgiving cleanse ourselves from sin, so that we may confidently, with spiritual joy, celebrate the Easter festival of Christ's resurrection, and receive the holy sacrament with faith, for the forgiveness of our sins and protection from the temptations of the devil.

Most of the sermon is about charity and the duty of helping the poor - you can read the whole thing here. (His other sermon for the first Sunday in Lent is about Christ's temptations in the wilderness, and you can read that here). He cites and translates various Biblical injunctions about giving to the poor, including Christ's words from Matthew 6:19-21:

This Gospel passage is most familiar, of course, in the later translation of the King James Bible: 'lay up for yourselves treasures in heaven, where neither moth nor rust doth corrupt, and where thieves do not break through nor steal; for where your treasure is, there will your heart be also.' But I found this little bit of Old English translation irresistibly poetic. It probably wouldn't have seemed so to Ælfric; the word goldhord is quite often used in Old English to translate thesaurus, and the earliest surviving English vernacular translation of the Gospels renders this passage in a similar way, as you can see here in BL Royal MS 1 A XIV, f. 40v: 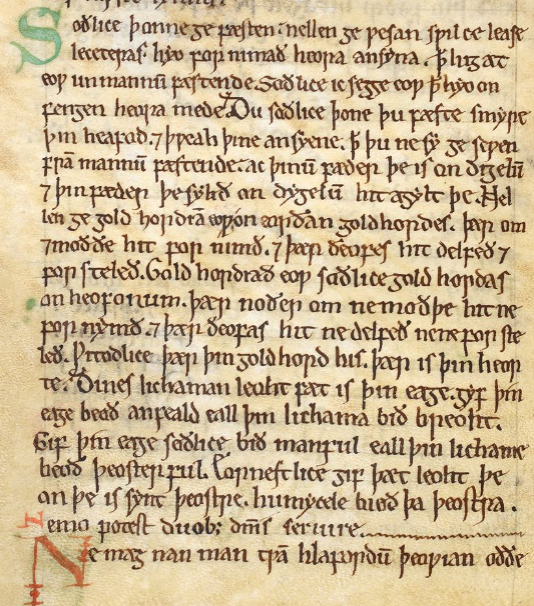 So this is not quite everyday language, but it's not necessarily consciously poetic, either. But to a modern reader hordiað eowerne goldhord on heofenum, 'hoard up your goldhoard in heaven', is a fantastically evocative phrase, conjuring up all kinds of associations: you might think of the piles of gold and treasure found in the Staffordshire Hoard, so very recently 'dug up and taken away' from the earth where it had been hidden for more than a thousand years; or of the famous passage from the end of Beowulf:

In the mound they placed rings and jewels,
all such trappings as hostile men
had previously taken from the hoard;
they let the earth keep the warrior's treasure,
gold in the ground, where it still lies now,
as useless to men as it was before.

This describes the treasure buried with Beowulf, dragon-guarded gold which has been won from the earth but must now return to it - dust to dust. Above I translated Ælfric's on eorðan as 'on earth' but it could also mean 'in the earth', and the verb behyde 'hide, conceal', suggests treasure buried in the darkness. The poem tells us that Beowulf's treasure has already been won, stolen, and returned to the earth at least once in its history, in this mortal realm where ðeofas adelfað and forstelað all precious things. Like the Gospel's goldhoard, touched by rust and moths (om and moððe), Beowulf's treasure is found to be omige, 'rusty', from long centuries hidden in the earth:

Beside him [the dragon] stood plates and cups,
dishes lay and precious swords,
rusty, eaten through, as if they had rested
a thousand winters there in the earth's embrace.

'Eaten through' by worms and moths, perhaps. I can't resist pointing out that elsewhere in Old English poetry a moth can be referred to as a devouring wyrm, which is also the word used for the guardian of Beowulf's hoard. Perhaps a moth is just a very tiny dragon. 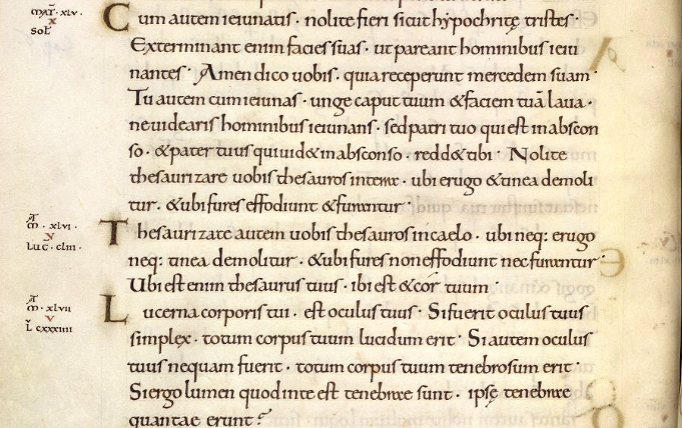 Thieves, treasure, goldhoards, and wyrm-like agents of destruction - we've come back to the Arkenstone and The Hobbit all over again. I can't quite make up my mind how much of this resonant mixture of associations is already inherent in the Gospel passage, and how much has been added by the Old English translations - or whether the language is meant to evoke so vividly the familiar images of treasure in Anglo-Saxon poetry. But the final point to make is that Christ's last statement, 'where your goldhoard is, there is your heart' is particularly appropriate because in Old English poetry the heart itself is often called a 'hoard', the place where the treasures of the spirit are kept. It is the breosthord, feorhhord, or sawelhord, the storehouse of thoughts or the life or the soul. And there's one other relevant -hord compound: wordhord, the store of words treasured up within the mind of a poet or a preacher. As Ælfric told us at Epiphany (quoting Solomon, sort of), "A goldhoard much to be desired lies in the mouth of a wise man'; words are treasures, too, as his own words help to demonstrate.
Posted by Clerk of Oxford at 4:11 pm

This is great. And the details and insight fascinating.

Lovely post, making interesting connections!
This stirred up a memory I had forgotten: at the end of my first Old English class, our tutor demonstrated the fact that Old English is still recognisably English, by reading the passage from the gospel in which the man hides his *goldhord* in a field.

Suddenly, the Parable of the Talents makes much more sense, with the third servant storing his treasure in the earth.