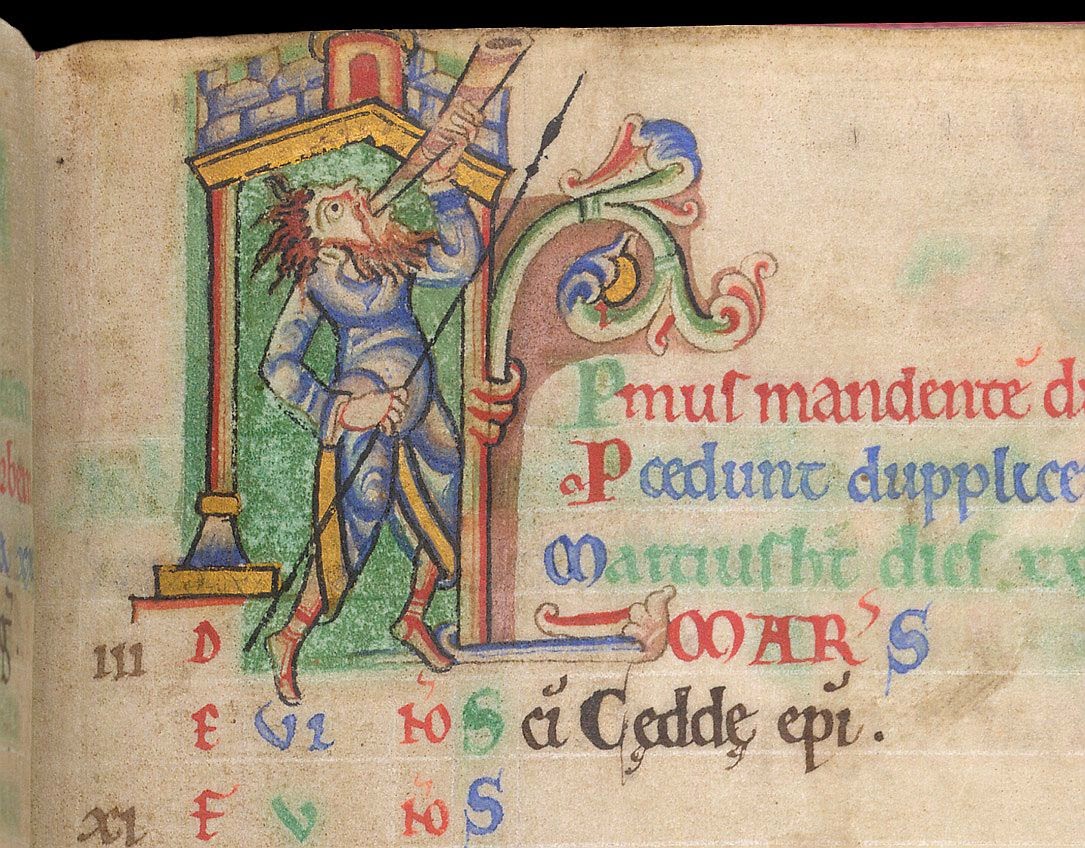 At the beginning of a new month, we can have a look at the Old English calendar poem known as the Menologium (last seen here in February heralding the start of spring) to see what it has to say about March.

So also is widely known
after three and two [nights] to peoples everywhere
the coming of the month to churls and chiefs,
(except when the extra day is appointed
every fourth year - then it comes to us
one night later to town);
adorned with frost, with hail-showers
fierce March journeys through the earth,
lofty Hlyda. Then, after eleven nights, the holy one,
noble Gregory, hastened into God's keeping,
brilliant in Britain. And Benedict
after nine nights sought the Saviour,
strong and stout-minded, he whom
rulefast men well praise in wise writings,
the Master's servant. And, too, the number-skilled
keep the equinox at that same time,
because the Lord God created in the beginning
the sun and moon on that same day.
Lo, four nights after men keep the equinox
the Father sent his archangel,
who announced salvation to
mighty Mary, that she should bear the Measurer,
best of kings, as it was made known
throughout earth; that was a glorious event,
famous among the peoples.

Two great saints, an equinox, and an annunciation; no wonder Byrhtferth says in his Enchiridion that 'though all the months are adorned with various joys and honours, March is the most so' (Ðeah ealle þa monðas synd mid mislicre blisse and wurðscipe geglengde, þeah is Martius swyðost). The Menologium uses some particularly nice words for March, who is figured - naturally enough, given his name - as a warrior. This is the month of Mars, god of war, whom one might well call reðe (fierce, savage) and healic (noble, lofty, proud). This characterisation also fits neatly with the recorded Old English names for the month, which include (as here) Hlyda, often interpreted as 'the loud', and Hreðmonað, of which the first element is probably the same as reðe. March is loud with blustery winds and savage with the last blasts of winter; this fierce warrior is hrime gehyrsted, 'adorned with frost', and accompanied by armies of hail-showers on his martial journey. (In this same poem, you might remember, Winter too is a warrior, who takes the earth prisoner with an 'army of frost and snow'.)

After the warrior March we hear about two great men of a very different kind. The month of March is distinguished by the feasts of two saints who loomed very large in Anglo-Saxon perceptions of their own history: Gregory the Great (March 12), who was credited with sending Christianity to England, and Benedict (March 21), father of monasticism, to whom the many Benedictines of Anglo-Saxon England looked as their founder and inspiration. Gregory is described as breme in Brytene 'famous, brilliant in Britain' because of his central place in the history of the English church. Not only was he, according to Bede, the prime mover in the conversion of the English, but his writings were among the works King Alfred considered 'necessary for all men to know', and many had been already translated into English more than a century before this poem was written.

As for Benedict - well, whoever the author of this poem was, we can be pretty sure he was a Benedictine monk, and probably a product of the tenth-century Benedictine Revival, perhaps a member of the circle of St Æthelwold. He would thus count himself among the group of those he describes as rincas regolfæst, 'men keeping fast to the Rule' (the Regula) and holding Benedict in great veneration. To a tenth-century monk, Benedict and Gregory were two of the most important figures in Anglo-Saxon history - even though neither ever came anywhere near England. (The author of this poem would have been puzzled by a programme I recently watched about monasticism in early Britain which didn't even refer to Gregory by name, and didn't mention Benedict until halfway through - not a narrative of Anglo-Saxon monasticism this Anglo-Saxon monk would have recognised! It's interesting to think about how our perception of such things can be so different from theirs.) 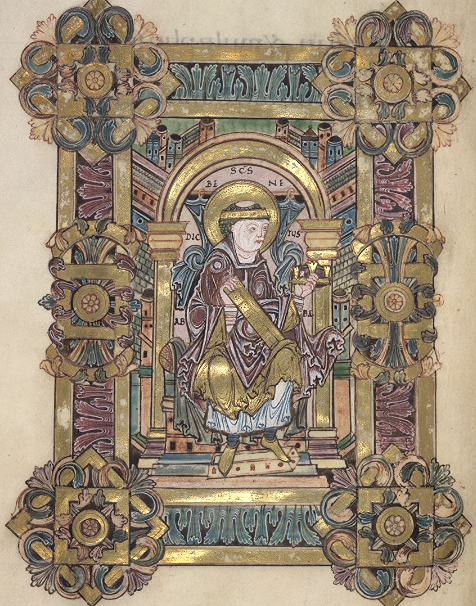 Like Ælfric in his sermon for New Year's Day, this poem notes the coincidence of St Benedict's feast on March 21 with the spring equinox - the Old English word for the equinox is emniht, from efen + niht 'even nights'. The spring equinox was the key date for calculating the rest of the calendar: it was considered to be the day on which the sun and moon were made, and therefore the day 'all times were created' (as Ælfric puts it), on the fourth day after the creation of the world on March 18. From this, every other date in the year - the solstices and equinoxes, the duration of the seasons, etc. - could be worked out, as well as the date of Easter. This was all very carefully calculated by the people this poem calls the rimcræftige, 'those skilled in numbers' (a fantastic word for any mathematicians out there!). In Anglo-Saxon England these rimcræftig scientists were usually the rincas regolfæst, the learned Benedictine monks. I have to confess that these subtleties of computus are a bit beyond me; I'd number myself among the manega sydefulle clericas who, as Byhrtferth gently notes in his attempt to explain the system, don't understand such mysteries as quadrans and bissextile days. I content myself with marvelling at the skill, patience, and learning of the rimcræftige, who work these things out so the rest of us don't have to. 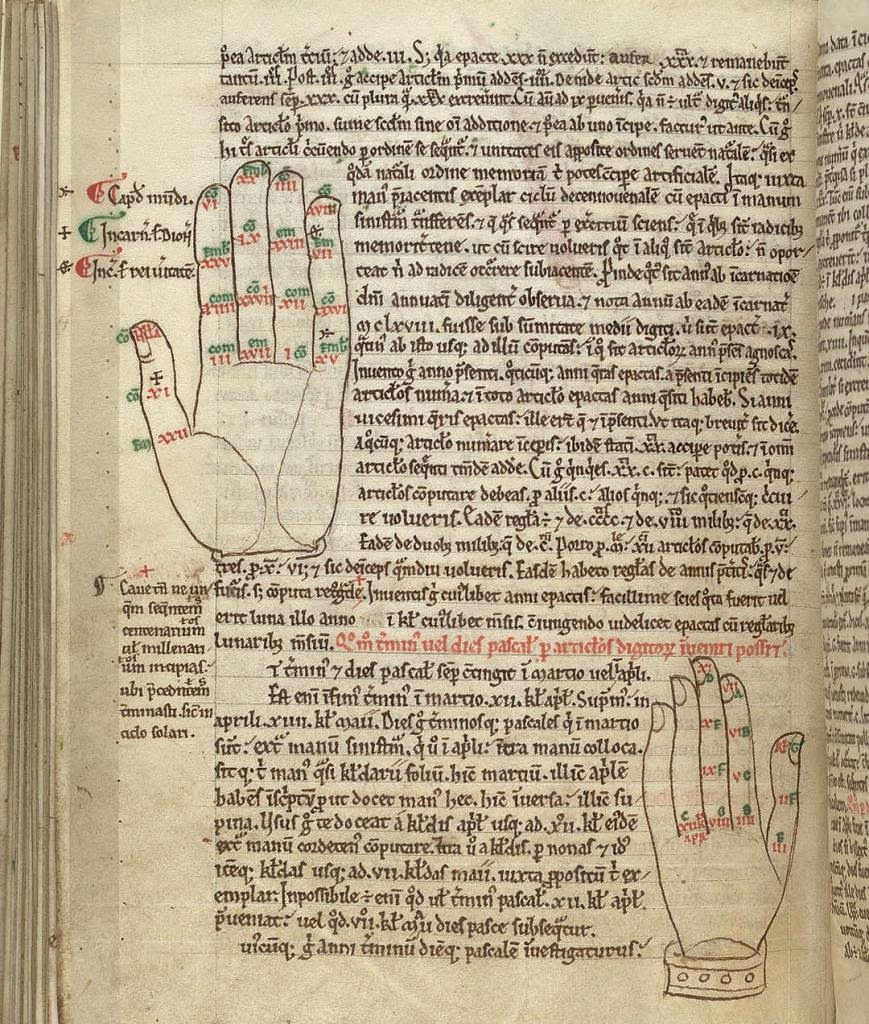 I look forward to you insight. Thank you. This was of particular interest to me being an Oblate of St. Benedict

It always strikes me how colourful and vivid all the drawings are, some of the subject matters seem so unbelievable!

Yes! I can never get over how vivid the colours are in Lansdowne 383, in particular: http://www.bl.uk/catalogues/illuminatedmanuscripts/record.asp?MSID=8825&CollID=15&NStart=383