'Nu ic his tempel eam': Annunciation in an Anglo-Saxon Poem 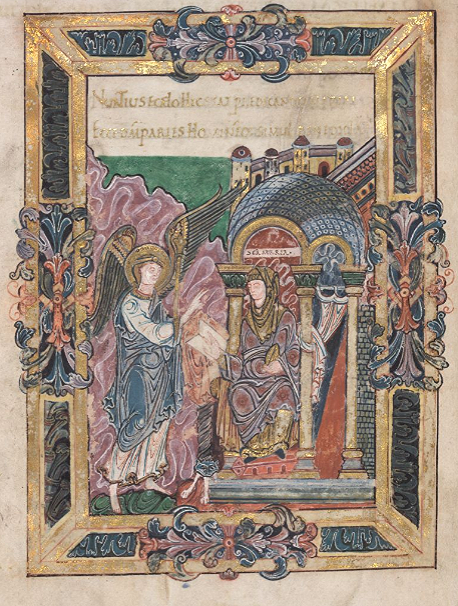 The Annunciation in the Benedictional of St Æthelwold (BL Additional 49598, f. 5v)
Today I thought I'd post an extract from an Anglo-Saxon poem about the Annunciation which might well be the first poetic treatment of this subject in English. It comes from the poem (or poem-sequence) known as Christ I, which is made up of poetic meditations on different aspects of the incarnation of Christ, drawing mostly on texts used in Advent. Some of the sections are based on the 'O' Antiphons, and I've posted about the richly creative responses to those liturgical texts before, in this post and several following it. Just as those poems begin with an address to Christ - 'O', in Old English the exclamation Eala - so this begins with an address to St Joseph: Eala Ioseph min, 'O my Joseph!' But rather than a liturgical acclamation, or a prayer, this is the voice of a woman speaking to her husband, and the poem is a dialogue in which Mary and Joseph discuss her miraculous pregnancy.

This is lines 164-213 of Christ I, and here's my translation (the speeches can be divided up in various ways, and it's not always clear who is speaking; this is one of several possible ways to assign them):

"O my Joseph, son of Jacob,
kinsman of David, the glorious king,
now you must entirely split our affection,
leave behind my love! I am all at once
deeply troubled, stripped of honour,
because I for your sake have heard
many insulting words,
terrible sorrows and bitter speeches,
and they speak scorn of me,
many slights. I must shed tears,
mourning in mind. God may easily
heal the sorrow in my heart,
comfort the distressed." "O young woman,
maiden Mary! Why do you grieve,
crying out in sorrow? I never found in you
a fault, or any suspicion
of sins committed, yet you speak these words
as if you in yourself were full of every sin
and wickedness. Too many injuries
have I received from this pregnancy!
How can I refute the cruel speeches,
or find any answer
against the hostile? It is widely known
that from the bright temple of the Lord
I willingly received a pure maiden,
free from sin – and now she is changed,
by someone unknown. It will not help me
either to speak or stay silent. If I speak the truth,
then David's daughter will die,
killed by stones. Yet it is worse
if I conceal a crime; a perjured man
must live ever afterwards loathed by men,
hated among the people." Then the Virgin unveiled
the true mystery, and spoke thus:
"I will tell the truth, through the Son of God,
Saviour of souls: that I never knew
intercourse with any man,
anyone on earth; but it was granted to me,
a young girl at home, that Gabriel,
heaven's high angel, hailed me in greeting.
He said truly that the spirit of heaven
would fill me with light; I would bear
the glory of life, the bright son, God's great child,
radiant source of majesty. Now I am his temple,
made without a flaw; in me the spirit of comfort
dwelt. Now leave behind
all your sore sorrows! Give everlasting thanks
to the mighty Measurer's Son, for I am made his mother,
though remaining a virgin; and you will be called his father
by the world's reckoning. The prophecy had to be
truly fulfilled in his own person."

It's interesting to compare this with another of the sections of Christ I devoted to Mary, 'Eala wifa wynn'; that too is a dialogue in which Mary is questioned about her pregnancy, and in response explains how she became the mother of Christ. But here the dialogue is much more personal, even intimate, exploring the complicated, shifting emotions of the couple: she seems to be worried about him, and he about her, both fearing the slander and hostility which her unexplained pregnancy will attract. But Joseph also doesn't understand what's happened to her, and is torn about what he should do - whether he should protect her by concealing her situation, or tell the truth and put her in danger.

And so Mary describes Gabriel's visit, how he came to her, geongre in geardum (a young girl in the 'yards' at home). The first section of the dialogue is full of anxious fear, but in her final speech Mary speaks clearly and confidently: Soð ic secge, she says, 'I will speak the truth'. Gabriel's message, as she relates it, is all described in the language of light, as if it's light itself which is conceived in her. As so often, any translation falters before the wide range of words Old English had for light and radiance: here in just two and a half lines we have leoma, onlyhtan, beorht, torht. Instead of being 'filled with sins', as Joseph had feared, Mary is filled with light - and so the prophecy is fulfilled, gefylled. 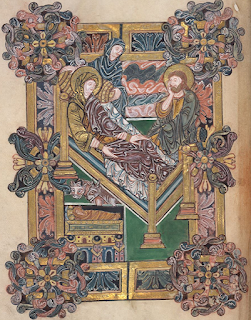