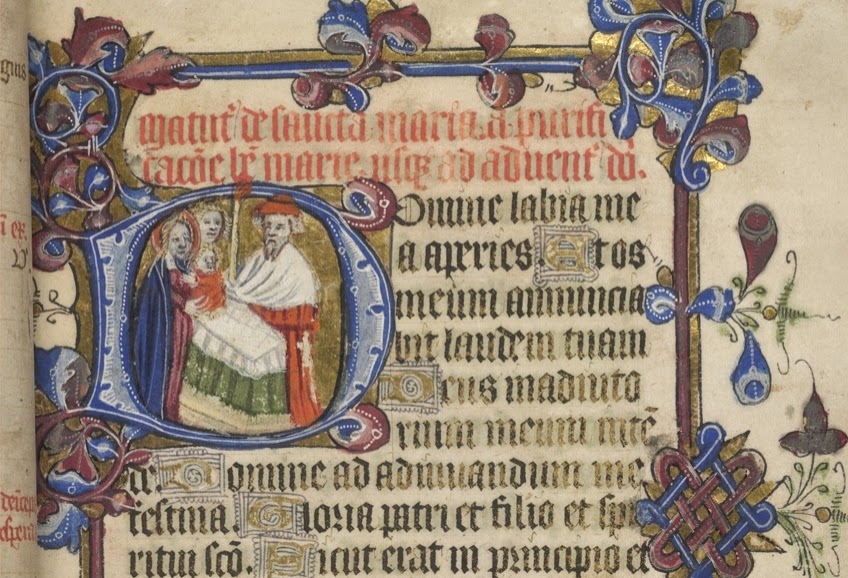 BL Add. 43473, f. 7
The other day I posted a description of a miracle which was said to have taken place during a Candlemas service in Anglo-Saxon England, in a church dedicated to the Virgin Mary at Glastonbury, c.910. As the congregation stood with their candles, the pregnant mother of the future St Dunstan had her candle miraculously kindled by light from heaven, and from her candle light spread to the congregation and all the people of England. That miracle-story, of course, draws a parallel between the infant Christ and the unborn St Dunstan, though like the Biblical narrative it centres on the experience of a woman: Dunstan's mother is cast in the role of Mary, bringing her child to the temple and his light to the world. But the story is told about (and by) a monk, and we know nothing about St Dunstan's mother except her name - Cynethryth. Some five hundred years later, on the other side of England, a laywoman, mystic and mother was able to describe her own experience of taking part in a Candlemas service. Margery Kempe records in her autobiographical Book many visions and meditations in which she enters spiritually into events in the life of Christ and the Virgin, and the Purification is no exception. This is an extract from Kempe's Book, as edited here, ch. 82:

[On Purification Day, also known as Candlemas Day, when the said creature beheld the people with their candles in church, her mind was ravished into a vision of our Lady offering her blessed Son our Saviour to the priest Simeon in the temple, as truly in her spiritual understanding as if she had been there in her bodily presence to make an offering with our Lady herself. Then was she so comforted by the contemplation in her soul which she had in the vision of our Lord Jesu Christ and of his blessed Mother, of Simeon the priest, of Joseph, and of other people who were there when our Lady was purified, and of the heavenly songs it seemed to her that she heard when our blessed Lord was offered up to Simeon, that she could hardly carry up her own candle to the priest, as other people did when the time came to offer them, but went wavering on either side like a drunken woman, weeping and sobbing so sorely that she could hardly stand upright, for the fervour of love and devotion which God put into her soul through high contemplation. And at times she could not stand up, but fell down among the crowd and cried out very loudly, so that many wondered at her and marvelled what was wrong with her, for the fervour of the spirit was so great that the body failed and could not endure it. She had such holy thoughts and meditations many times when she saw women being purified after childbirth. It seemed to her in her soul that she saw our Lady being purified, and experienced high contemplation in beholding the women who came to make an offering with the women who were purified. Her mind was entirely drawn from earthly thoughts and earthly sights and entirely set in spiritual sights, which were so delightful and so devout that in the time of fervour she could not control her weeping, her sobbing, or her crying, and for that she suffered a great deal of wondering, many a joke and many a scorn.]

What's particularly striking to me about this passage is that for Margery Kempe, the mother of fourteen children, a ritual of purification after childbirth was an everyday part of female experience - not something she would only encounter at Candlemas, but the occasion for frequent meditation whenever she saw women being 'churched'. It was not an unfamiliar or alien practice - as it surely is for most congregations today - but something she had experienced herself, something she had in common with Mary and with many other women. 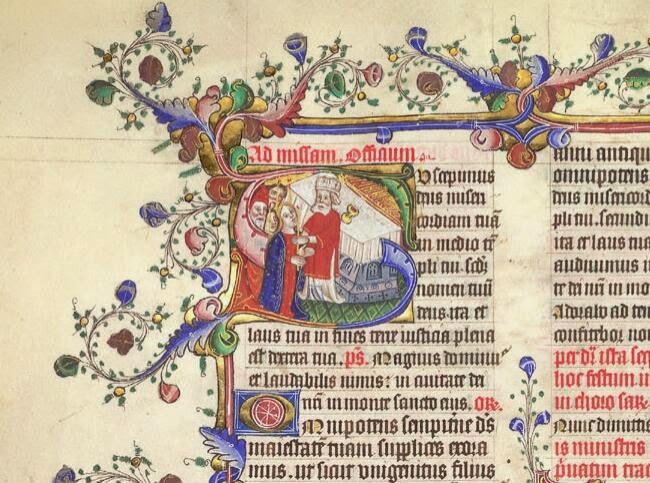 People bringing candles to be blessed at Candlemas (BL Arundel 109, f. 159v)
Margery Kempe was an extraordinary woman in many ways, but here (apart from the 'wavering like a drunken woman', perhaps) she was doing exactly what every ordinary member of the laity was supposed to do at Candlemas: transporting herself into the Biblical story, joining the procession into the temple in spirit and in body, bearing light in her hands. She was doing what St Dunstan's mother Cynethryth had done, and in doing so also received a revelation - though a private vision, not a public miracle. It's worth noting that a longer period of time separates Cynethryth and Margery Kempe than separates Kempe and the Candlemas poem I posted yesterday, which was written during the First World War. From Cynethryth to Margery, from Glastonbury to Lynn, and for many other women and men in many other places, these ceremonies were an important part of ordinary people's lives for so many centuries; it's so strange - not to use any stronger word - that they are no longer.
Posted by Clerk of Oxford at 11:55 pm

Thanks for posting this wonderful text with translation and images.

Lovely - but 21st century people haven't missed out altogether! Many churches, particularly cathedrals, do still have Candlemas services, including blessing of candles and procession with candles, so it is still a living tradition that people do have the opportunity to observe and participate in. The churching of women is still done too, in the Roman Catholic and Eastern Orthodox churches, usually together with the child's baptism.

Yes, of course - I took part in a Candlemas procession myself on Sunday. But it was a tradition that died out for centuries, has only been revived in fairly recent times, and is still limited in its spread.

In any case, I was mostly thinking of the non-churchgoing majority, to whom these ceremonies are now very unfamiliar.