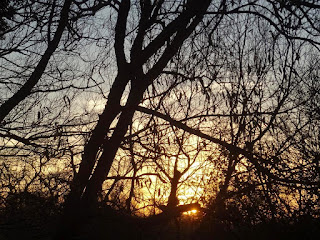 The fourteenth-century poem, which I've posted here several times before, must be the most apt poem ever written for the last days of November. This would be a literal translation:

Winter awakens all my sorrow,
Now the leaves grow bare.
Often I sigh and mourn sorely
When it comes into my thoughts
Of this world's joy, how it all goes to nothing.

Now it is, and now it is not,
As if it had never been, truly.
What many people say, it is the truth:
All passes but God's will.
We all shall die, though it please us ill.

All the grass which grows up green,
Now it fades all together.
Jesu, help this to be understood,
And shield us from hell!
For I do not know where I shall go, nor how long I shall dwell here.

What cannot be conveyed in translation is the power of the untranslatable negatives, especially 'Nou hit is, and nou hit nys, / Also hit ner nere, ywys', and of some of the turns of language which belie the poem's apparant simplicity. Note especially the phrase waxeth bare: 'waxen' can just mean 'to become', but it usually means specifically to 'grow' (like the moon, which waxes and wanes). But when leaves fall, waxing bare, it's the opposite of growth; it's death and depletion. 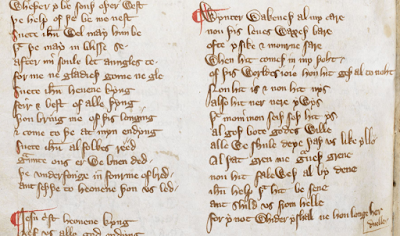 The same manuscript also contains (along with many, many other things) the poem 'Now shrinketh rose', which offers another way of responding to the dying of the year. 'Winter wakeneth', despite (or perhaps because of) its brevity and simplicity, comes to my mind every year at this time. The first line calls to mind the association between winter and care which lies behind many evocations of this season in Anglo-Saxon poetry, especially The Wanderer's famous compound wintercearig (also close to untranslatable: 'winter-sorrowful', it means, perhaps 'as sorrowful as winter'). And the poem also evokes that favourite metaphor, life as leaf, which might remind long-term readers of the falling fallowing leaves and men from this post on Anglo-Saxon Autumns.

It's a strange and beautiful thing that the cycle of the year, to which poets have so often turned as a reminder that nothing in life is stable, is in fact one of the great constants in life. Every year November comes, and we turn to this poem and many others like it, and whatever may have changed in our own lives, still the leaves are falling and still poets are drawing the same lessons from them. Whether it's the Anglo-Saxon poets or the fourteenth-century ones or the many exquisite modern examples, poets have been saying this for ever and ever, yet it never grows old - that moni mon seith, soth hit ys. Change is the great constant. An Old English passage I quoted here last month muses on this paradox:

You rule the year, and govern it through the turning of the four seasons, that is, spring and summer and autumn and winter. These change places, each with another, and turn so that each of them is again exactly what it was before, and where it was before; and likewise all stars turn and change in the same way, and the sea and rivers too. In this way all created things undergo change. But some change in another way, such that the same thing does not come again where it was before, or exactly as it was before, but another comes in its place; as leaves on the trees, and fruits, grass, and plants and trees grow old and dry, and others come, grow green, and reach maturity, and ripen, and with that begin again to wither.


Today is the last day of the liturgical year; tomorrow, Advent begins. As I delved today into my archive of Advent posts, preparing to bring them out again to meet the eyes of readers old and new, I was reminded of the many ways in which medieval writings on Advent encourage us to engage with time. They urge us to ready ourselves for the coming of an event which has already happened, thousands of years ago; and they direct us to look not just towards the immediate future, as we count down four weeks forwards into our own lives, but towards the eventual future, the Apocalypse, the end of all time. But even as we are thinking about time and change, we are enacting rituals we have gone through many times - hearing the same words, and taking delight in their familiar constancy. As we turn to the same poems every autumn, to learn from well-known words how to think about loss and change, so every Advent we turn to the same readings and songs. We are different, but they are the same; every year we bring different things to them, and take different things away. Because Advent begins the new year, on the first Sunday of Advent we turn the book back to the beginning and start again. You could spend a lifetime reading these texts and never get tired of finding new things in them - a yearly mystery and a yearly joy.

Why not begin with Ælfric's homily for the First Sunday of Advent? 'Þeos tid oð midne winter'
Posted by Clerk of Oxford at 5:02 pm

Thank you. Thought-provoking and encouraging.

November can be such a sad month, sodden and unkind, and then along comes Advent and the looking towards the light. Your understanding of how this has always been so and the setting out of the messages in the old poems, as always, a thoughtful delight

Thank you for this. My mother is probably having her final illness after three long hard years following a major stroke. This poem, and your words are a great help to me at this time.
It's a sad time, and i am sorrowful, but it's also a season, a cycle, a turn through the ages that have been and will be, and I know that at the end I will be glad. To hear such living poetry from such long-dead voices is a great comfort.

Ps I don't mind if you do or don't publish that comment I just made. I wanted to express just how powerful and relevant ancient poetry can be.

I had forgotten about the melancholy joy of advent.

Life is a fearsome thing
in our November,
though the testimony of leaves,
holy men, and poetry
lessens--transforms,
for some--the coming dark.

("men" in the traditional inclusive if micro aggressive sense)

I would revise to "lessens and enlightens"

A bittersweet but very positive post which made me think again and anew on terminal illness. Thank you for such honesty.

I've only just found this. What a wonderful post, and a beautiful poem.

I love the economy of "nou hit nys". Is that a whole separate verb "not to be" or a way of forming a negative that we have lost?