The last week of Advent is the season of the 'O Antiphons'. These texts, used at Vespers in the days before Christmas, have an enduring attraction, even, it seems, for those who do not usually find liturgical antiphons very interesting. All ways of counting down to Christmas seem to charm us - Advent calendars, Jesse trees, even the increasingly popular misconception, beloved of social media managers, that the 'twelve days of Christmas' refers to a countdown of the days before Christmas (rather than the days after). We get obsessed with marking time, in this darkest and brightest season of the year.

But the O Antiphons are more than a simple countdown. If we count the days through December because we're impatient for Christmas to come, these texts encourage us to explore the source of that impatience, to understand the nature of our own desire. Part of the appeal of the O Antiphons is that they express an urgent longing, and although they are, of course, addressed to Christ, the titles with which they identify him speak more broadly of the kind of things we all desire but can rarely or never find in this world: perfect wisdom, peace, justice, true freedom, light in the darkness, companionship which will never fail us. Whether or not you believe these desires can be fulfilled by the promises of Advent, these songs touch a powerful chord.

Like all human desire, this is fertile ground for poetry. There are multiple surviving medieval poetic responses to the O Antiphons, and in the past I've posted several Middle English poems based on these texts - two poems and two carols. These are interesting, but are far surpassed in quality by the exquisite Anglo-Saxon poetic meditation based on the antiphons, known today as the 'Advent Lyrics' or as Christ I.

This poem survives in the Exeter Book, one of the most important manuscripts of Anglo-Saxon poetry; the manuscript dates to the tenth century, but the poem may be a century or more older. It's the very first poem in the manuscript, and in fact begins mid-sentence because the first leaves of the manuscript are now lost. As it stands, the poem consists of twelve sections, each opening with the Old English equivalent of the antiphons' 'O': Eala. Some of these sections correspond with the seven antiphons which are today the best-known, but the first three (O Sapientia, O Adonai, O Radix Jesse) are missing, and there are several 'extras'. The seven antiphons most widely used have a unity of their own: they are all addressed to Christ, beginning with a title or epithet for him, and taking the form of an appeal directly to him, Come. There were, however, other antiphons used in this season, associated with the O Antiphons but taking a variety of forms: medieval practice was quite diverse on this point, and some are addressed to the Virgin, others to saints (St Thomas the Apostle, the angel Gabriel), while among the antiphons used by the Anglo-Saxon poem, one is a dialogue between Mary and Joseph, another is addressed to the Trinity, another is an exclamation ('O wondrous exchange!') and so on.

The Old English poem is a complex and beautiful composition, theologically and poetically sophisticated, finding a way to unite scriptural imagery with the richness of the Anglo-Saxon tradition. It is, therefore, a joy to translate - though a challenge! In the past I've posted some translations of the sections based on the seven chief antiphons, but I thought this year I might post a few of the 'extra' ones too, just because I wanted to get to grips with translation again. Here are the sections I've posted so far, if you want to catch up (in the order they appear in the poem, which is not the order they appear liturgically):

Five more sections follow, and I'll post one of them tomorrow. A translation of the whole poem can be found on this site. Today, I thought I'd post 'O Jerusalem', which, as you can see, appears third in the poem as it stands. The antiphon on which this section is based is: O Hierusalem, civitas Dei summi: leva in circuitu oculos tuos, et vide Dominum tuum, quia iam veniet solvere te a vinculis.

O vision of peace, holy Jerusalem,
best of royal thrones, Christ's home city,
angels' native dwelling! In you alone
the souls of the righteous rest for eternity,
exulting in glory. Never is a sign of corruption
seen in that dwelling-place,
but every sin stays far away from you,
all evil and strife. You are gloriously full
of holy hope, as your name is.
See now for yourself, across the wide creation,
looking around the spacious roof of the sky
on every side, how the king of the heavens
seeks in quest of you, and comes himself.
He makes his home in you, as it was long ago
foretold in words by wise prophets;
they proclaimed Christ's birth, spoke comfort to you,
best of cities! Now that child is come,
born to relieve the works of the Hebrews,
brings joy to you, unlooses the chains
fastened by evil. The terrible need he knows,
how the wretched one must wait for grace. 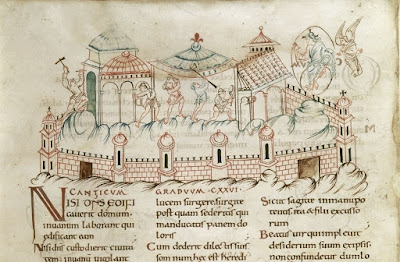 Where other antiphons address Christ, this one watches him. With Jerusalem, it looks from afar and sees him coming, watches him draw closer as he seeks out (geseceð) his city through all the vastness of the heavens. He is coming home, to the city which is called his burglond, eardgeard, the angels' eþelstol - all words which have connotations of 'native dwelling-place'. (The home which is 'an older place than Eden/And a taller town than Rome'.)

The last line here recalls one of the most famous lines of Old English poetry, the opening of The Wanderer, which appears in the same manuscript as this poem:

Often the solitary one waits for grace,
the mercy of the Lord, although he, sorrowful in heart,
across the ocean's ways must long
stir with his hands the ice-cold sea,
tread the paths of exile. Fate is greatly fixed.

These much-discussed lines are ambiguous, even to their translation: gebideð can mean either 'wait for' or 'experience', and are too has a broad range of meaning, involving 'grace, favour, mercy'. However you interpret are gebidan (and even if, like me, you can't make up your mind), it is an apt characterisation of the season of Advent, a time of waiting for something which has already happened - a coming, or multiple comings, both expected and already experienced. In The Wanderer, the half-line are gebideð opens a poem which movingly traces the difficulty of waiting for comfort, of coping with loss and loneliness and trying to find meaning in the midst of winter. Here, the same words close a poem confident that comfort and joy have come, that winter's fetters will be loosened, that the nearoþearfe, 'pressing, terrible need', will be met.
Posted by Clerk of Oxford at 6:17 pm

Terrific stuff. You are much too good for me.

I am very grateful for your work here, although "work" is also a bit ambiguous, for I can tell that this is a pleasure. In any case, your writings enrich my days.