'Lost Literature' and the companions of Hereward 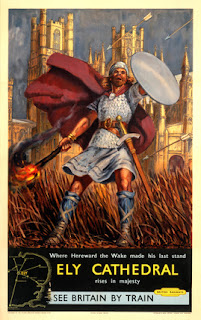 My latest column in the May issue of History Today can now be read online here. (Or you could always subscribe to the magazine, of course...) It's inspired by an intriguing aside in the Gesta Herwardi, the twelfth-century account of the adventures of Hereward 'the Wake'. The Gesta Herwardi is full of awesomeness (yes, that's the technical term), and a particularly fantastic bit lists the various exploits of what the Anglo-Saxon Chronicle calls Hereward's genge, his 'gang':

As he had promised his men, Hereward returned to England, together with his two nephews, who were now distinguished in all warlike matters, and his wife Turfrida... They found some of his men in hiding, protecting themselves. Rejoicing at his return, these men quickly hastened to join him: namely, a certain Winter, a distinguished fighter, who was short in stature but very tough and strong, and Wenoth and Ælfric Grugan, notable in all courage and strength. These, as effective in deeds as they were big and tall, were joined by three of Hereward's nephews: Godwine Gille, who was called Godwine because he was not inferior to the Godwine, son of Guthlac, who was greatly celebrated in the tales of the ancients; and Duti and Outi, two twin brothers, alike in character and appearance and both praiseworthy warriors. However, the remainder of his band of followers was dispersed across the whole country. Before his departure he had arranged a signal for them, that he would set fire to three villages beyond Brunneswold near Bourne; and so he set them aflame and disappeared into the woods until his men were gathered around him.

And when they were all assembled, they were all the most eminent men. Not one among them was considered to have achieved knightly rank unless he had first performed some praiseworthy deeds. These are their names, with those mentioned above making up the number: Wulfric the Black, who got his name because he had once stained his face with charcoal and gone unrecognized into a garrison, and laid ten of them low with a single spear; and his friend, a certain Wulfric Rahere, or 'Heron', who was called that because he once happened to be at Wrokesham Bridge when four innocent brothers were brought there to be executed, and terrifying the executioners, who had called him 'heron' in mockery, he valiantly set the innocent men free and killed some of their enemies. Others too were numbered among the more famous of Hereward's knights: Godric of Corby, nephew of the Earl of Warwick, and Tostig of Daveness, kinsman of the same earl, whose name he received at baptism; Acca Vasus, the son of a nobleman from the outskirts of Lincoln who owned one of the towers of the city; and Leofwine Mowe, that is 'Sickle', who got his name because once when he happened to be alone in a meadow cutting grass, he had been set upon by a score of local peasants with iron pitchforks and spears in their hands, and single-handed, with only his sickle, he wounded many and killed some, charging among them like a reaper and finally putting them all to flight.

In company with these was also a certain Turbeorht, great-grandson of Earl Edwin, and Leofwine Prat, that is 'Crafty', who though frequently captured by his enemies cunningly escaped, often killing his guards - and so he had this nickname. And in addition to these must be numbered others, also very experienced in warfare: Leofric the Deacon and Ullicus [or perhaps 'the bailiff'] of Drayton, Thurkell and Utlahe (that is 'Outlaw'), Hereward's cook Hogor, Hereward's kinsmen Winter and Leofred, two distinguished men, and Rapenald, steward of Ramsey. These were leaders; so too were Wulfric the Black and Wulfric the White, Ælfric Grugan, Ylard, Godwine Gille, Outi, and the other Outi mentioned before, and those two splendid men, Siward and the other Siward the Red, who were Hereward's nephews. With these there were other most eminent knights: Godric of Corby, the Norman priest Hugo and his brother Ylard, Leofric the Deacon, Tostig of Rothwell and Godwine of Rothwell, Osbern, Alsinus, Leofwine Prat, Thurcytel, and Ullicus of Drayton. All of these were indeed the most distinguished and splendid knights in the whole kingdom; and there were several others, whom it would take too long to name and describe separately.


The Latin can be found here. This assortment of tales and nicknames suggests a lively culture of story-telling, which provides an interesting context for the reference to the 'tales of the ancients' about Godwine, son of Guthlac, which I discuss in the article. Some of the stories here may have come directly from the men concerned; the author of the Gesta Herwardi says he had met two of Hereward's companions, 'Brother Siward of Bury St Edmunds and Leofric Black', who were by his time still 'men of distinguished appearance, although they had lost the beauty of their limbs because of the trickery of enemies'.

But this fascinating text is much more than a concoction of old soldiers' anecdotes, and it draws its material from romance, hagiography and legend. Leofric the Deacon, named here, is elsewhere said to be the author of the English text on which the Gesta Herwardi claims to be based (another bit of lost literature, if it in fact existed); we're told 'it was the endeavour of this well-remembered priest to assemble all the doings of giants and warriors he could find in ancient tales as well as true reports, for the edification of his audience; and to commit them to writing in English, so they would be remembered'. What exactly is meant by this, and how literally should we take it? I'm still working that out...
Posted by Clerk of Oxford at 10:54 am

My Latin is rather rusty, but surely Hereward set fire to three houses ('villas') rather than three villages. At least, I hope so!

I rarely comment but wanted you to know that I think your blog is wonderful and I recommend it always.

I'm impressed that someone actually checked the Latin ;) You may well be right, Sue (at least, I hope so too!), though translations of this passage usually have 'villages' - I'm not sure why, since your suggestion does seem more likely...

The phrase "Leofwine Prat, that is 'Crafty'" caught my eye. I wasn't aware that nickname ever had a positive meaning. The online Oxford dictionary is silent regarding the same. Can you shed some light on this? Thanks.

Yes, that's an interesting one - in Old English 'prætt' means 'trick, craft' (and there's an adjective 'prættig', meaning 'wily, clever', which was the earliest sense of 'pretty'). The English surname Pratt is supposed to derive from this sense of the word. The modern slang term 'prat' meaning 'idiot' comes later (20th century) and the OED says its origin is unknown, so presumably it's not related to the OE word...