'He stey opon the rode' 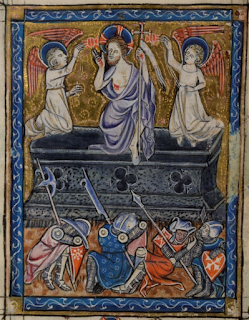 Two short fourteenth-century poems for Eastertide, from William Herebert. This single couplet is an English rendering of the verse 'Crucem sanctam subiit':

He stey opon the rode, that barst helle clos;
Ygurd he was wyth strengthe, the thrydde day aros.

He climbed upon the rood, who burst hell's clos, [enclosure, stronghold]
Girded he was with strength, on the third day arose.

Perhaps the most interesting word here is the verb stey (stien), which I've translated as 'climbed', though it can refer to various kinds of upward movement. It's a dynamic way of describing Christ's ascent of the cross; in medieval poetry of the Crucifixion, that ascent is often (at least, more commonly than today) imagined as an active, energetic movement - Christ springing to mount the cross, rather than passively being lifted up by the hands of others. Herebert's word stey comes from the Old English gestigan, which is the verb used in the same context in the Dream of the Rood: there the cross says of the 'young warrior' gestah he on gealgan heanne, 'he mounted on the high gallows'.

It's a verb which connects Easter and the Ascension, another moment when Christ stey upwards. I don't think we have a word today which quite covers the various meanings of stien - 'ascend' just doesn't do it, since it's altogether too decorous for a word which also refers to mounting horses and scrambling up trees. This is a word for Christ the warrior, going into battle, with the cross imagined as both his weapon and his steed. ('What is he, this lordling, that cometh from the fight...')

This energetic figure recalls Gregory the Great's spirited picture of Christ as the lover in the Song of Songs, who comes 'leaping' towards his beloved:

When He came to redeem us, He came, if I may so say, in leaps. My dearly beloved brethren, would you know what His leaps were? From heaven he leapt into the womb of the Virgin, from the womb into the manger, from the manger on to the Cross, from the Cross into the grave, and from the grave up to heaven.

The Anglo-Saxon poet Cynewulf turned this image into English poetry, in his poem on the Ascension:

Of this Solomon sang, son of David,
in spiritual mysteries, wise in songs,
ruler of nations, and spoke these words:
“This shall be made known: that the King of angels,
the Lord mighty in strength, will come springing upon the mountain,
leaping the high uplands; hills and downs
he will garland with his glory, and redeem the world,
all earth's inhabitants, by that glorious leap.”
The first leap was when he descended into a woman,
an unblemished virgin, and there took human form
without sin; that became a comfort
to all earth's dwellers. The second bound
was the birth of the boy, when he was in the manger,
wrapped in cloth in the form of a child,
the glory of all glories. The third leap
was the heavenly King's rush when he climbed upon the cross,
Father, Comforting Spirit. The fourth bound
was into the tomb, when he relinquished the tree,
safe in the sepulchre. The fifth leap
when he humbled the host of hell's inhabitants
in living torment; the King bound within
the advocate of the fiends in fetters of fire,
the malignant one, where he still lies
fastened with chains in prison,
bound by sins. The sixth leap,
the Holy One's joyous play, was when he ascended to heaven
into his former home.

rodorcyninges ræs þa he on rode astag  - 'the heavenly King's rush when he climbed upon the cross'. All these verbs of rushing and leaping and bounding are absolutely full of vigour and vitality, as if Christ is the embodiment of life itself - a force of sheer energy, which cannot be contained by any tomb or any clos. They remind me too of those medieval depictions of the Resurrection where Christ has one foot in the tomb and one out - 'bursting from the spiced tomb'... 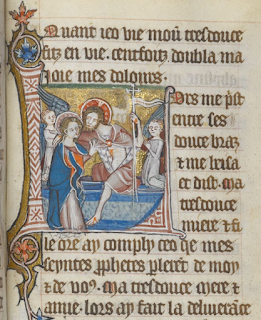 Jesu, our ransom, love, and longing,
Lord God almighty, Maker of all things:
Flesh you took and man became at time’s ending.
What compassion so overcame you that you bore our sins,
Such bitter death to suffer, to raise us up from sin?
Hell's stronghold you broke, and saved your own from bondage;
With great majesty you rose up to your Father’s right hand.
By that same compassion, overcome our wickedness
With your mercy, and fill us ever with the bliss of your face.
Be now our joy, you who shall be our reward,
And may our bliss be ever in you, who will keep us with you. 'Jesu nostra redemptio', with an English gloss, in an Anglo-Saxon hymnal
(BL Cotton Vespasian D XII, f. 71v)
Posted by Clerk of Oxford at 12:33 am