Ascension Day and the Death of Bede 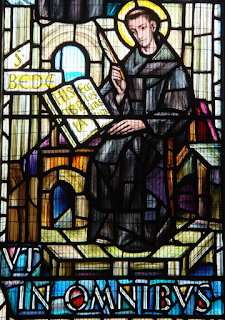 Today is the feast of the Ascension, and it is also the feast of Bede, Anglo-Saxon England's greatest scholar and historian. Bede died on the eve of Ascension Day in 735, which that year fell on 26 May. His feast is usually celebrated on 25 May (to avoid a clash with the feast of St Augustine of Canterbury, who also died on the 26th), which means that today, for once, it falls at the very same moment in the church's year as it did in 735. This is a lovely coincidence (or occasional mercy, rather) because the feast of the Ascension and the words of its liturgy were in Bede's mind, and on his lips, as he lay dying. We know this because a moving account of Bede's death was recorded by a monk named Cuthbert, a former pupil of Bede's and later abbot of Wearmouth-Jarrow. Cuthbert was present at Bede's deathbed, and this is how he describes his death.

For nearly a fortnight before the Feast of our Lord's Resurrection he was troubled by weakness and breathed with great difficulty, although he suffered little pain. Thenceforward until Ascension Day he remained cheerful and happy, giving thanks to God each hour day and night. He gave daily lessons to us his students, and spent the rest of the day in singing the psalms so far as his strength allowed. He passed the whole night in joyful prayer and thanksgiving to God, except when slumber overcame him; but directly he awoke, he continued to meditate on spiritual themes, and never failed to thank God with hands outstretched. I can truthfully affirm that I have never seen or heard of anyone who gave thanks so unceasingly to the living God as he.

O truly blessed man! He used to repeat the saying of the holy Apostle Paul, 'It is a fearful thing to fall into the hands of the living God', and many other sayings from holy scripture, and in this manner he used to arouse our souls by the consideration of our last hour. Being well-versed in our native songs, he described to us the dread departure of the soul from the body by a verse in our own tongue, which translated means: 'Before setting forth on that inevitable journey, none is wiser than the man who considers - before his soul departs hence - what good or evil he has done, and what judgement his soul will receive after its passing'.


This English poem is known as 'Bede's Death Song', and this is how it is preserved in Old English (in the Northumbrian dialect, probably unfamiliar even to those of us familiar with Old English!):


To comfort both us and himself, he also used to sing antiphons, one of which is 'O King of glory, Lord of might, who on this day ascended in triumph above all heavens, do not leave us orphaned, but send to us the Spirit of truth, the promise of the Father. Alleluia'. And when he reached the words 'do not leave us orphaned', he broke into tears and wept much. An hour later he began to repeat what he had begun and so continued all day, so that we who heard him sorrowed and wept with him...

During these days, in addition to the daily instruction that he gave us and his recitation of the psalter, he was working to complete two books worthy of mention. For he translated the Gospel of Saint John into our own language for the benefit of the Church of God as far as the words 'but what are these among so many'. He also made some extracts from the works of Bishop Isidore... On the Tuesday before our Lord's Ascension his breathing became increasingly laboured, and his feet began to swell. Despite this he continued cheerfully to teach and dictate all day, saying from time to time, 'Learn quickly. I do not know how long I can continue, for my Lord may call me in a short while.' It seemed to us that he might well be aware of the time of his departure, and he spent that night without sleeping, giving thanks to God.

When dawn broke on Wednesday, he told us to write diligently what we had begun, and we did this until Terce. After Terce we walked in procession with the relics of the saints as the custom of the day required, but one of us remained with him, who said, 'There is still one chapter missing in the book that you have been dictating; but it seems hard that I should trouble you any further.' 'It is no trouble,' he answered: 'Take your pen and sharpen it, and write quickly.' And he did so.

But at None he said to me, 'I have a few articles of value in my casket, such as pepper, linen and incense. Run quickly and fetch the priests of the monastery, so that I may distribute among them the gifts that God has given me.' In great distress I did as he bid me. And when they arrived, he spoke to each of them in turn, requesting and reminding them diligently to offer Masses and prayers for him. They readily promised to do so, and all were sad and wept, grieving above all else at his statement that they must not expect to see his face much longer in this world. But they were heartened when he said, 'If it be the will of my Maker, the time has come when I shall be freed from the body and return to Him who created me out of nothing when I had no being. I have had a long life, and the merciful Judge has ordered it graciously. The time of my departure is at hand, and my soul longs to see Christ my King in His beauty.'

He also told us many other edifying things, and passed his last day happily until evening. Then the same lad, named Wilbert, said again: 'Dear master, there is one sentence still unfinished.' 'Very well,' he replied: 'write it down.' After a short while the lad said, 'Now it is finished.' 'You have spoken truly,' he replied: 'It is well finished. Now raise my head in your hands, for it would give me great joy to sit facing the holy place where I used to pray, so that I may sit and call on my Father.' And thus, on the floor of his cell, he chanted 'Glory be to the Father, and to the Son, and to the Holy Spirit' to its ending, and breathed his last.

We may confidently believe that as he had devoted himself with such ardour to the praises of God here on earth, his soul was borne by the angels to the longed-for joys of Heaven. And all who saw and heard of the death of our father Bede declared that they had never known anyone end his days in such deep devotion and peace.

The antiphon at which Bede broke down in tears is 'O rex gloriae', sung on the feast of the Ascension, which alludes to Christ's words to his disciples: 'If ye love me, keep my commandments. And I will pray the Father, and he shall give you another Comforter, that he may abide with you for ever; even the Spirit of truth... I will not leave you comfortless: I will come to you.'

The English translation of John's Gospel which Bede was working on at his death has not survived, and nor have any of Bede's other English writings (it's not clear whether his 'Death Song' was of his own composition, or if he is quoting a poem he knew). But a century or so after Bede's death, an Anglo-Saxon poet composed a poem on the Ascension which must be one of the greatest poems ever written on that subject. I quoted it at length here, but this is my favourite part:

So the beautiful bird ventured into flight.
Now he sought the home of the angels,
that glorious country, bold and strong in might;
now he swung back to earth again,
sought the ground by grace of the Spirit,
returned to the world. Of this the prophet sang:
'He was lifted up in the arms of angels
in the great abundance of his powers,
high and holy, above the glory of the heavens.'
...The sixth leap,
the Holy One's hope-play, was when he ascended to heaven
into his former home. Then the throng of angels
in that holy tide was made merry with laughter,
rapt with joy. They saw the glory of majesty,
first of princes, seek out his homeland,
the bright mansions. After that the blessed city-dwellers
endlessly delighted in the Prince's play.

In Europe, the Ascension is the feast of summer skies. With Ælfric, who encourages us to 'behold the sun', we stand gazing into the heavens, which at this time of year are (sometimes) a glorious, fathomless blue; and like Christ at the Ascension, the sun climbs higher and higher in the sky as the solstice draws near. Birds, back for the summer, wheel and soar through the air. This week a flock of swifts have returned to the street where I live; in the long light evenings they swoop and swing through the sky, quicker than thought, sheer energy and life and unfettered freedom. That's how this Anglo-Saxon poet imagined Christ.
Posted by Clerk of Oxford at 6:00 am

What an absolutely beautiful post.
Thank you for it.

I have always found the death of Bede almost unbearably poignant in its humility. The vow of stability, which is often overlooked maybe because it seems less glamorous than chastity and obedience, is somehow encapsulated for me in Bede's desire only to look across the room at the place where he was accustomed to pray. But he spirit was boundless.

Thank you for this post on this Ascension Day.

Thank you. What a lovely post and Byrd's music as well.

Byrd's music to these words is among my favorites. Thank you for sharing the story of Bede's passing.

This is such a lovely essay! Thank you so much for writing this and posting it so that others may read and listen. I know that it is a famous story, Bede's passing out gifts from his casket, but I wonder if he knew what he was really leaving behind. I wonder if he was aware of just how important his written words, and sense of contemporary history would be to future generations. Because of him, scholars such as yourself, are able to pick up his quill and let us see what his eyes saw, though many years of sun and rain have passed through stained glass.

Wonderful story, thanks for the detail. So Bede was very cheerful, never knew that... Hope does wonderful things for a person.

Very beautiful. Thank you very much.