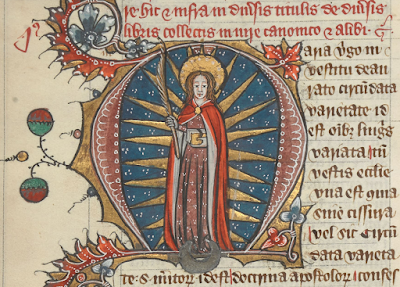 The Virgin in glory (from a fourteenth-century manuscript, BL Royal MS 6 E VII Part 2, f. 479)
It's a while since we've had any poetry on this blog, and it seems time to correct that. This year I've been paying particular attention to the works of the early fourteenth-century English poet William Herebert, and especially his sensitive, thoughtful versions of Latin hymns; and since we're in Advent, let's take a look at his version of 'Alma Redemptoris Mater', the Compline antiphon for this season. (For another Middle English poetic response to the same text, see this post.) It's a short text; the Latin is:

Listen to it here. This is Herebert's version:

Holy mother, who bore Christ, buyer of mankind,
You are gate of heaven's bliss, who gives the near and ready way.
You, star of the sea, raise up the folk who intend to rise.
Within you you bore your holy father,
Who maiden were before and after,
At which nature wonders.
From Gabriel's mouth you received the 'Ave';
Release us from sins now, we beseech you. Amen.

That gives you the sense of Herebert's version, but not the poetry. Herebert is a faithful translator but he always adds something to his sources, and close attention to his choice of language is immensely rewarding. I've been thinking recently about how approaching familiar texts through Old and Middle English translations brings to life certain aspects of religious language which have become, in Modern English, so conventional and familiar as to be almost dead metaphors. There's a perfect example here in Herebert's version of redemptor, which is buggere, to be pronounced (I promise!) as buyer - the sense being that Christ has 'bought back' (i.e. redeemed) mankind from the slavery of sin. It's a fairly common Middle English translation of redemptor, giving an English equivalent rather than adopting, as we do now, the Latin word; redeemer turned up late in English, in the fifteenth century, and Herebert's far from the only one to use buyer or again-buyer. (The Wycliffe Bible says: 'I wot that myn aȝeenbiere liueth, and in the laste dai I am to rise fro the erthe...')

The financial metaphor is there in the Latin redemptor, of course - emptor is buyer, as in 'caveat emptor' - but it's probably not alive to most people today who use the word 'redeemer'. (Though other poets have made use of it; compare, perhaps, 'Redemption' by Herebert's namesake, George Herbert...) But it was alive to Herebert, and must have been to a medieval reader of this poem. Herebert's whole first line is only translating three words of the Latin, the opening phrase of the hymn - alma redemptoris mater - and yet he has space not only for that metaphor but also for aural play on buyer and bear, a similarity of sound which links Mary's action ('bearing') to Christ's action ('buying'), and thus underlines the fundamental link between them which motivates the whole poem: the role that Mary plays in salvation, through her choice to become Christ's entry into the world and her acts of love to mankind. 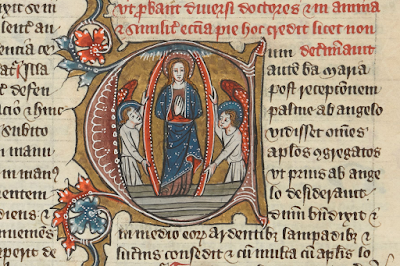 The hymn imagines Mary as the open door to heaven, a road by which Christ enters the world and by which mankind can travel to joy. Herebert's description of that road is again a little more expansive than the Latin, and he plays with a beautiful ambiguity in his language which is not present (I think) in his source. He says that Mary the 'prest wey ȝyfst and bunde'; I translated this above as 'gives the near and ready way', but it's not quite as simple as that. Both prest and bunde mean something like 'ready, prepared, near at hand', and the sense is that the road to heaven is accessible and open (pervia is the Latin word he's building on). However, both words mean a good deal more than 'open'. Both also connote energy, readiness, and eagerness, and in other Middle English texts are more often used of people than of objects or roads: of an army preparing for battle, a servant promptly attending on his lord, a lover eager to do his lady's bidding - of anyone quick, lively, spirited, attentive, ready to spring into action. They're incredibly life-filled words.

And so, perhaps, they suggest the eager, life-bearing, near-at-hand person in an Advent context: Christ, who stands ready to spring into the world through the gate opened by Mary. Herebert's verb ȝyfst offers more than the Latin, too: Mary 'gives' (not only 'remains') the way to heaven, and of course, she gives Christ to the world. The way in this poem is primarily the road to heaven but Christ, too, is 'the way', and the adjectives used to describe the way here could apply equally well - if not rather better - to him.

Herebert's Christ is always an energetic figure, active, determined, and forceful, brimming with physical as well as spiritual vitality. I talked about this earlier in the year in reference to Herebert's poems for Easter and the Ascension, which have Christ climbing onto the cross and then into the skies, and it's most obvious of all in his poem 'What is he, this lordling, that cometh from the fight?' In that poem he imagines Christ as a young knight coming bloodied from battle, who through his strength and douhtynesse has won a hard struggle against evil. This is the Christ whom the medieval church saw in the young man of the Song of Songs, who comes seeking his beloved:

As Gregory the Great wrote (and an Anglo-Saxon poet turned into poetry):

When He came to redeem us, He came, if I may so say, in leaps. My dearly beloved brethren, would you know what His leaps were? From heaven he leapt into the womb of the Virgin, from the womb into the manger, from the manger on to the Cross, from the Cross into the grave, and from the grave up to heaven.

Lo, how the Truth made manifest in the Flesh did leap for our sakes, that He might draw us to run after Him for this end did He rejoice, as a strong man to run a race.

This isn't the passive, suffering Christ of most medieval poetry about the Crucifixion, nor the grave gentle Jesus of later imaginings; it's something immensely vital, virile and alive, a shape-shifting force of pure energy. Herebert's word prest exactly describes this Christ. 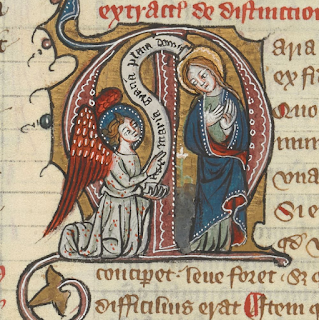 But Christ is only hinted at here; the focus of the hymn is Mary, and her intermediary role. The images of her as 'gate of heaven' and 'star of the sea' are familiar ones, which Herebert also translates in his version of another Marian hymn, 'Ave maris stella'. I'll come back to the 'gate' image in another post this Advent (if I get around to it!) because there's a wonderful Anglo-Saxon poem which does even more, brilliantly, with that image of Mary as the door between the worlds. Here it's only one aspect of her role as mediator. She is implored 'rer op the folk that rysing haveth in munde' ('raise up the folk who want to rise', with a nice alliterative touch), and 'lesne ous of sunne', a more specific petition than the Latin's peccatorum miserere - asking to be 'released' from sin loops back to the opening idea of Christ as 'redeemer'. So the poem comes full circle, and returns to the link between Mary's action and Christ's - the one who bought us and the one who bore him.

A timely post, between the Feast of the Immaculate Conception and the Feast of Our Lady of Guadalupe. (The latter may not be a big deal in Oxenford, but in the Americas, including Hispanic parishes in the US, it is a very big deal.)

Quite a beautiful analysis - thank for this post, rich with considerations for Advent-time!

A very beautiful read during Advent - thank you for posting.

Some wonderful insights, thanks for that. And thank you for the Sinfonye link and introduction as well. When the Christ story is seen as a metaphor pertaining to the soul's consciousness journey, it awakens a natural and organic 'Know Well' understanding. It sparks a knowledge and perception with regards to all existence: of the beauty of both the material and spiritual, and the temporal and eternal.

The soul knows already. It knew before it arrived. And year in and year out it happily waits for its human counterpart to come to consciousness. "Out of your sleep, arise and wake!" as the medieval carol goes. That is what Christmas is celebrating each year: the window of light that, in one paradigm-shifting moment of understanding, gives birth to this authentic and genuine and childlike human-and-soul association. Life is gloriously simple, I suppose that's why I'm attracted to the simpler music of times past.