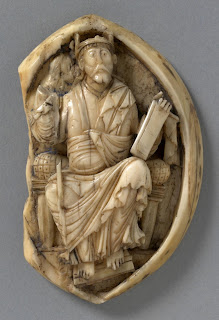 Of all the poetry you might read in Advent, the great season of paradox and interpretative possibility, the very best choice may be some of the poetry inspired by the 'O Antiphons'. The last week of Advent has for centuries belonged to these ancient songs of appeal, which are sung each day at Vespers as Christmas draws closer. You can read about the history of the O Antiphons here; these texts are now best known via J. M. Neale's hymn 'O Come, O Come Emmanuel', but they have inspired poets since the earliest days of poetry in English. In the past I've posted several Middle English poems based on these texts - two poems and two carols - as well as the exquisite Anglo-Saxon poetic meditation inspired by the antiphons, which is known today as the Advent Lyrics or as Christ I.

This poem, which survives in the tenth-century Exeter Book, is incomplete (the beginning is lost), but as it stands it consists of twelve sections, each opening with the Old English equivalent of the antiphons' 'O': Eala. Some of these sections correspond with the seven antiphons which are today the best-known, but the first three (O Sapientia, O Adonai, O Radix Jesse) are missing, and there are several additions; diverse medieval practice encompassed a range of further antiphons no longer used today. In past years I've looked in detail at different sections of the poem, which you can find in the following posts:

Of the twelve there are still four I haven't looked at here, and this year I'll translate and explore two more of them. It's not entirely clear whether the Advent Lyrics are one poem or a sequence of poems, but either way they benefit from being read in stages like this, piece by piece - they are poems which ask you to read them slowly and meditate upon them. Each word, each metaphor, gives forth more meaning the more you dwell upon it. The O Antiphons are reflections on the idea of Christ under his different names and titles, a shifting succession of metaphors which attempt to express something, yet not all, of what he might be: the key, the root, the king, the sun, pure and complete wisdom. I've said in the past that I think the antiphons lend themselves particularly well to Anglo-Saxon poetry because this kind of allusive naming and renaming is exactly how much Old English poetry chooses to explore ideas (usually in the form of what's called 'variation') - it's an incremental, oblique progression of thought, where each name offers a new form of understanding or a different glancing light upon the thing described.

So these are texts rich in metaphor, alive with language and images of profound beauty; and yet they are something more, because in Christ, as nowhere else, metaphor collapses into truth. The antiphons suggest that in some mystical sense what is coming at Christmas is more truly the sun (or root, or king) than the sun itself. It is the external world which is the metaphor, Christ who is the reality. God is a poet who has written the world in metaphors which reveal his truth, his self; and our task - our pleasure - is to learn how to read them.

At the same time, there's something about the antiphons, and the poems inspired by them, which is not solely meditative - they are urgent and immediate and dramatic (in every sense of that word). They are to be sung as if in the voice of the whole church, the whole world, calling out in longing to its Lord. Each is a cry of desire, bearing a startling emotional intensity, and they encourage the reader to dwell with that desire - to feel it, explore it, attempt to understand its source. What is it we long for? What do we hope for, what do we seek? Sometimes the poems articulate what they are asking for - they appeal for light, or for freedom, or for strength - but at other times the desire is left undefined, and perhaps more powerful for being so. The poems do not promise that desire will or can be fulfilled; they long for and ask for fulfillment, but they don't possess it yet. They exist forever in a state of hope and uncertainty, acknowledging the world's great wound of need, and appealing for it to be healed. 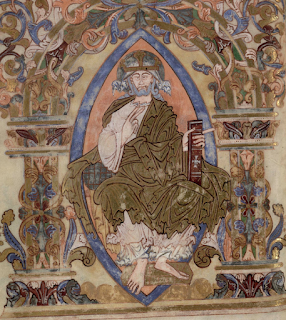 So, here's the first of this year's translations: 'O caelorum domine'. This is the antiphon on which the poem is (rather loosely) based:

O Lord of the heavens,
who with the Father and the Holy Spirit eternally lives,
hear your servants,
come to save us, do not delay.

This is so simple - what could be simpler? But look what the Anglo-Saxon poet made of it.

O holy Lord of the Heavens,
from of old you were with your Father
equal-being in the glorious home.
Not one angel had yet been made,
nor one of the mighty and majestic host
which guards the kingdom in the skies,
the splendour-dwelling of the Prince and his thegns,
when first you were with the eternal Lord
yourself establishing this vast creation,
the wide and spacious lands. One with you both
is the sheltering Spirit. Saviour Christ,
we all pray to you in humility
that you may hear the voice of the hostages,
of your captives, Liberating God,
how we are sore pressed by our own desires.
The cursed spirits, hate-filled hell-foes,
have cruelly confined the exiled race,
bound with bale-ropes. The remedy is
dependent entirely on you alone, eternal Lord.
Help the heart-sore, that your coming here
may comfort the wretched, though we
through our desire for wickedness have made a feud against you.
Have mercy now on your servants and think on our sorrows,
how we stumble on, weak at heart,
wandering hopelessly. Come now, king of men,
do not delay too long! We need kindness,
for you to rescue us and give us the true
grace of salvation, so that we may henceforth
always be able to do the better thing
to thrive among the people: your will.

There's a very sudden shift in this poem which occurs around the halfway point - a vertiginous plummet from heaven down to hell. The first half is all glory, eternity, stability, strength; the second half suffering, sorrow, constriction, frailty. By the swiftness of the transition, the poem enacts the descent it asks for: the entry of Christ, 'Lord of the heavens', into the world of exiles and captives. It reminds me of this image from an Anglo-Saxon Psalter of a gigantic Christ leaning down to pluck his people from the jaws of hell: 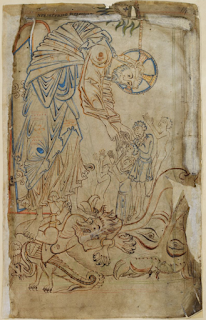 This is the kind of disparity of scale the poem evokes, with its contrast between the brade brytengrundas, 'the wide and spacious lands' of his dwelling-place, and the confining (genyrwad, i.e. 'narrowed' ) limits of ours.

The first half of the poem is stately and measured, with some elegant negatives:

Not one angel had yet been made,
nor one of the mighty and majestic host...

There's language of stability and constancy: eternity, of course, and the establishment of the heavens, described as a þryðgesteald, a 'dwelling of glory' (gesteald suggests a fixed dwelling, stable and steadfast.) And we have a reminder too that there was almost no theological concept which Anglo-Saxon translators wouldn't render in English if they could; so notice here efenwesende, 'equal-being', as the Old English for 'consubstantial'!

But the second half is darker and sadder. The last lines are very moving, offering two affecting verbs to characterise what humans do in the world: we stumble and we wander (tealtrigað and hwearfiað). The verb tealtrian suggests tottering, stumbling, unsteady movement, while hwearfian is something more turbulent: 'to turn, change, roll about, revolve, wander'. I particularly associate hwearfian with The Seafarer, where it describes the movement of the soul which flies out of the body to roam restlessly across the earth, 'eager and greedy'. That's an image, and a poem, of ravenous desire - of 'hunger' and 'longing' and 'lust', which drive the speaker out onto the ocean, away from the safe and familiar to an existence which is painful, lonely, but better than the life he has known on land.

In the Advent poem, too, desire is a powerful force. We are in captivity, bound not just by the ropes of devils (bealorapas) but by our own desires: we sind geswencte þurh ure sylfra gewill. By our love of sins (firena lust) mankind has enslaved itself, and placed itself in 'feud' with God. If the O Antiphons take their power in part from the force of their desire for God, this poem suggests what happens when that potent desire is misdirected. The only cure is liss, one of those far-ranging Old English words which means many beautiful things: mercy, favour, grace, gentleness, kindness, joy. Alliteratively speaking, liss often collocates in Anglo-Saxon poetry with life and with love; but here it's with ne lata to lange, a cry of impatience: 'Do not delay too long.'
Posted by Clerk of Oxford at 8:00 am

A moving exegesis about an aspect of the Anglo-Saxon world of which I know nothing; thank you!

Been following you for a while now, Clerk, but this is one of your finest. Wonderful writing - a corker.

Quite beautiful and well put. Thank for this post!

This deepens my appreciation for the O Antiphonal style writing and helps me appreciate the earlier speakers of English for their insight and poetry. Thank you!