On the coast of Yorkshire on a September day

It's the time of year for a favourite story of mine, which seems like a good opportunity to break a long blogging drought. Here's a short summary of an episode which I discuss in further detail in my book, as a taster to induce you to notice that it's currently on sale... 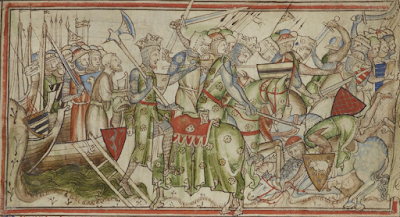 Harold Hardrada's army landing in England, in a 13th-century English manuscript
(CUL MS Ee.3.59, f.31)
On or around 18 September in the autumn of 1066, the king of Norway, Harald Hardrada, arrived on the coast of Yorkshire with a large army. In his company was Tostig, the brother of Harold Godwineson, king of England, who had joined forces with the Norwegians against his brother. Harold Godwineson himself was occupied elsewhere, on the south coast, having spent the summer awaiting a Norman invasion which had not - yet - come. Soon after their arrival the Norwegian forces won a battle at Fulford, near York, but were defeated a few days later by the English king at Stamford Bridge. In this battle, Harald Hardrada was killed. Accounts of the Norwegian invasion of 1066 in medieval English sources tend to be fairly brief, since it came to be overshadowed by the Battle of Hastings a few weeks later; but in Scandinavian history Harald Hardrada was a major figure, and so many Old Norse sources tell detailed and powerful narratives about the last days of his life. Written centuries after the events they describe, they are not really intended to be reliable sources for what actually happened in 1066; instead, they show us how later Norse writers thought about this period of history, which was (among other things) a turning-point in England's relationship with the Scandinavian world.

One such is a text called Hemings þáttr, a narrative written in Iceland in the thirteenth century, which deals at length with the attempted Norwegian invasion of England, the Norman Conquest, and its aftermath. Following other Norse sources, it tells how Harald's last days were marked by a cluster of omens which seemed to show the king that his death was approaching; Harald is shown embarking on the invasion with a sense of foreboding, increasingly confident that this will be his last expedition, the end of a magnificent career. He has been talked into it by Tostig, egged on to ambition by a bitter and vengeful man - Tostig is jealous of his brother, wants power for himself, and is trying to use the Norwegian king to get it. Harald knows Tostig is using him, knows he can't be trusted, and yet agrees to support him. Almost before he has done so, the bad omens start: Harald's men have threatening dreams, sailors report mysterious fires at sea and blood pouring out of the sky, a ghost rises up from a graveyard to prophesy that the king will fall. Worst of all, before setting sail, Harald has a vision of St Olaf, his martyred half-brother, who angrily chastises him for what he is about to do. Harald is shaken and Tostig, a wily 'man of many words', has to talk him round, telling him it's just some 'English witchcraft' trying to frighten him. But the signs could not be clearer that this invasion will not end well.

By the time they reach the English coast, the relationship between the king and his English egger-on is strained. One thing that's interesting about this part of the story is how precise the geographical references are, compared to the English sources; the Old Norse sources are much more specific about locating Harold and Tostig in particular places as they travel along the coast of Yorkshire, and Cleveland, Scarborough, and Ravenser are all mentioned by name. (Sometimes medieval Icelandic writers knew more about northern England than historians in the south of England did.)

It's at Cleveland that Harald and Tostig have a terse, tense conversation:

They reached land and came ashore at a place called Cleveland. The king asked Tostig, ‘What is the name of the hill which is along the land to the north?’

Tostig said, ‘Not every hill here has a name given to it.’

The king said, ‘But this one has a name, and you shall tell it to me.’

Tostig said, ‘That is the howe of Ivar the boneless.’

The king replied, ‘Few who have landed in England near this howe have been victorious.’

Ivar the Boneless was one of the most famous Vikings to invade England, and stories about him abound in both medieval English and Scandinavian literature. The context for this superstition about his burial-mound is explained in another Old Norse saga, Ragnars saga:

When Ivar lay in his last illness, he said that he should be carried to the place where armies came to harry, and he said he thought they would not have the victory when they came to the land. And when he died, it was done as he had said, and he was laid in the howe. And many people say that when King Harald Sigurðarson [i.e. Harald Hardrada] came to England, he landed at the place where Ivar was, and he died on that expedition. And when William the Bastard came to the land, he went to the place and opened Ivar’s mound and saw Ivar, undecayed. Then he had a great fire made and had Ivar burned in the flames. After that he fought battles across the country and won the victory.

The difference between the two invaders of 1066 is shown by how they react to Ivar's burial-mound: William is prepared to risk the wrath of the great Viking by burning his bones, but Harald, already convinced he is doomed to die on this expedition, accepts the bad omen as his fate.

I'm interested in the burial-mound story, but I've written about that before, so here I'll instead explain why I also very much like how Hemings þáttr imagines the little dialogue between Harald and Tostig. Picture them, on the coast of Cleveland on a warm September day, steeling themselves for coming battle and passing the time with this ill-tempered conversation. This is the kind of naturalistic moment at which Icelandic sagas excel - more like something from a modernist novel than a medieval history. It's sparse and tense, and what matters most is what's not being said. (It will now take me three paragraphs to explain what the saga leaves unsaid...) As battle approaches, the two allies are getting on each other's nerves: Tostig thinks the king is losing his grip, and Harald is increasingly frustrated with Tostig's evasions. Harald already fears the answer to his question about the hill - he intuits that they have landed in an ill-omened place - and he wants to make Tostig confirm it. Tostig's irritable attempts at deflection suggest he knows it too, but doesn't want to say so.

Sagas of this genre are often interested in the relationship between kings and their advisors - what it is and isn't safe to say to a powerful man, and how best to say it - and there's some of that going on here, all tact and tactics as Tostig tries to distract the king from fears which might become self-fulfilling prophecies. There are also some undercurrents to do with Tostig's status as an outsider Englishman (as this saga presents him) and a Norse writer's view on whether the English in general can be trusted to speak the truth. In his ambition for power Tostig has set himself apart from his countrymen and keeps telling Harald 'you can't trust the English', speaking as if he's not one of them - but in the eyes of the Norwegians he absolutely is, in part because he's the most untrustworthy of all. Harald knows that the English hate Tostig, and Tostig knows it too - so perhaps it needles him to be called on to act as guide to the English landscape. 'You're from around here, you're supposed to know this place - tell me what that hill's called'.

And there's something memorable and almost proverbial about Tostig's brittle riposte, 'Not every hill has a name'. Not everything is an omen, he's trying to say, not everything is about something else - just focus on the job in hand! I think of that sometimes as a useful little self-rebuke against the tendency to take things too seriously. (But in this case he's wrong, of course: this is an omen.) Altogether it's a brilliant evocation of eve-of-battle nerves, and the sense of anticipation, of something momentous drawing near, is very strong. What comes next you can read about here. (And in my book - did I mention it's currently on sale?)
Posted by Clerk of Oxford at 6:06 pm

'Not every hill has a name'. -- my inspiration for the day. Thank you for this interesting post about a usually overlooked invasion.

What a wonderful tale. It would be very interesting to know how much of it reflects genuine folk memory, and how much is simply later invention.
It's said that only 24 ships were needed to carry the survivors home, out of an original invasion force of 300, so I guess it is just possible that some eyewitness' details survived to be written down. A great story either way.