It was raining the day I went to Patrixbourne. As I've mentioned before, I'm a fan of rain (though not a fan on facebook, because that's just weird). It happened to be a good condition in which to see Patrixbourne, too, because the 'bourne' of the name refers to a stream - the Nailbourne, in fact, the same as flows through Bishopsbourne and Bekesbourne, nearby. It's a winterbourne stream (a word which always makes me think of Thomas Hardy's wonderfully-named Giles Winterborne in The Woodlanders), but a very wet day provided an appropriately damp atmosphere. 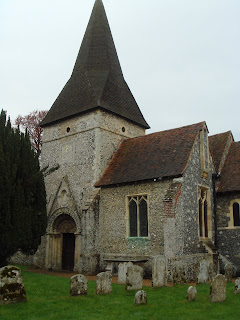 Unfortunately the weather made it difficult to take many pictures of the outside, which is a shame, because Patrixbourne has some beautiful twelfth-century carving around the doors of the south side of the church. However, it's not quite as much of a shame as it might be, since that carving is somewhat eroded. Continuing the St Thomas Becket theme from yesterday, we have here a bishop identified as him, although goodness knows how! Perhaps just because we're so close to Canterbury here. This is the priest's door: 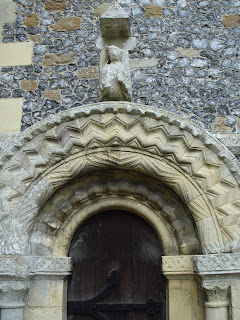 And this is the south door. Please forgive the smudge of rain on the lens! 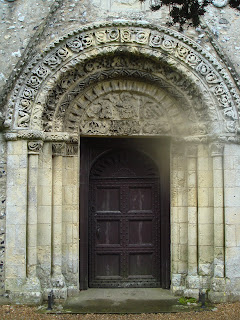 I know, I know, bad form. But in my defence, it was raining really hard. Anyway, you can see the Norman decoration around the tympanum; it's beautiful, and as you can see, some of the heads are well-preserved: 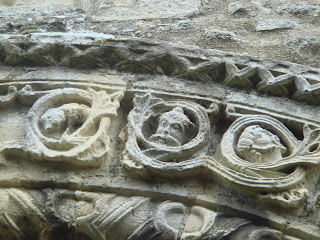 This chap has a moustache, I think! Oh, those Normans. So whimsical. In the picture below you can just about make out Christ enthroned, surrounded by angels and griffins and such. 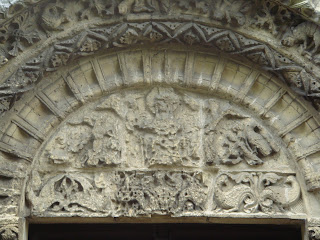 But compare it to a picture of nearby Barfreston (of which more another day) and you can see what it might have looked like: 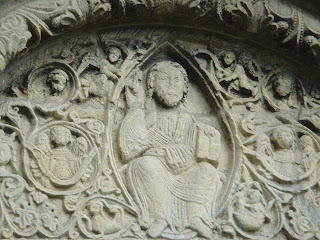 Barfreston has much more such carving inside and out. However, Patrixbourne has other things to recommend it inside, including a memorable rose window at the east end: 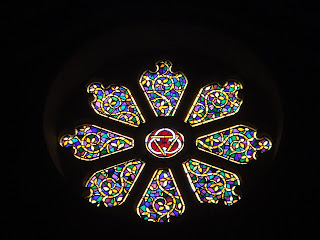 And some sixteenth-century Swiss glass installed by a Victorian patron of the church, most of it unabashedly secular - like this depiction of Pyramus and Thisbe! 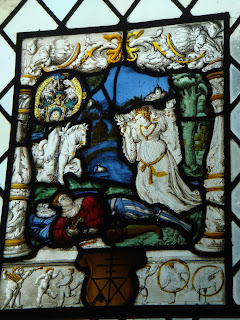 Odd thing to find in a church, but no stranger than a medieval man with a moustache, I suppose. One final picture, which will give you an idea of how small and dark the church is inside: 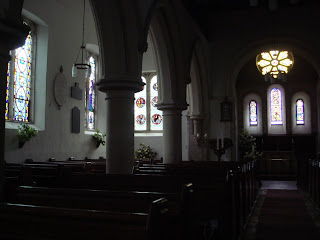 You can't quite blame the rain for that one. But a lovely place, nonetheless.
Posted by Clerk of Oxford at 3:26 pm