A few minutes down the road (or down the river) from Patrixbourne is Bekesbourne, home of this pretty little church-on-a-hill: 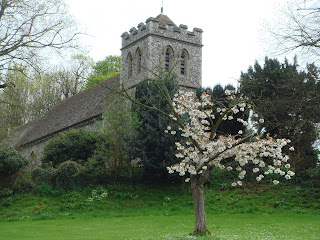 This church has a Norman doorway too (do you see a theme?) and since it was closed, that was all I saw of it. It stars this peculiar fellow: 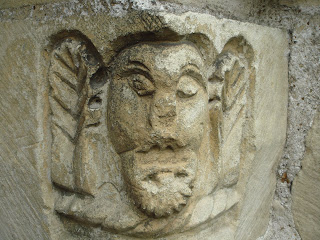 Nearby Littlebourne has a beautiful village green and by comparison the church (which is surrounded by modern houses) is... not so beautiful. It's named for St Vincent of Saragossa, though, which is unusual, and it has a recovered medieval wall-painting. 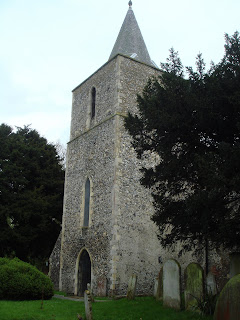 The painting depicts St Christopher, to whom pilgrims would pray before crossing the River Stour on their way to Canterbury. You can see a boat clearly, and perhaps the larger figure is St Christopher carrying Christ on his shoulders? There's something architectural going on in the rest of the picture, and possibly some other more indistinct boats. 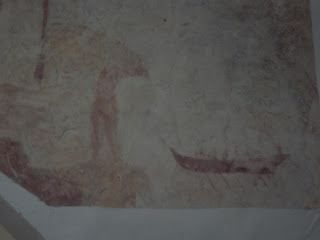 By the way, this is the opposite side of Canterbury from the road Chaucer's pilgrims follow. They come in via Harbledown ('where ther stant a litel toun/Whiche that ycleped is Bobbe-up-and-doun,/Under the Blee, in Caunterbury weye'). This is how Harbledown remembers Chaucer for that three-line reference (which comes in the Prologue to the Manciple's Tale, in case you were wondering): 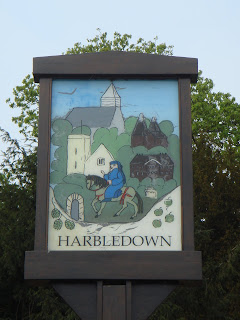 Poor Chaucer, always to be remembered as a fat man on a horse. The Ellesmere manuscript has a lot to answer for.
Posted by Clerk of Oxford at 1:12 pm