An Anglo-Saxon Story of St George 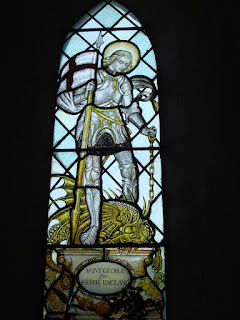 Tomorrow is St George's Day. There are alternative claimants for the position of patron saint of England, and with my general preference for Anglo-Saxon saints, I have to admit I would rather see Edmund of East Anglia or Edward the Confessor as my country's patron; they both have prior claim, they were both really rather wonderful, and they definitely existed, too. Their only disadvantage is that their feastdays are in October and November, rather than sunny April. However, St George is what we have.

Ælfric included a life of St George in his Lives of Saints collection, a good three centuries before George became the patron saint of England. There are no dragons in his story; even if dragon-slaying had been part of the George legend in the late tenth century (which it wasn't) Ælfric doesn't generally go in for monsters. His version is a conventional passio, telling how George, a nobleman in Cappadocia, was persecuted for his faith and martyred for refusing to worship idols (Apollo, in fact, as Ælfric tells it). There is one excellent episode in the story, though, which stands out. When George remains unharmed by torture, the emperor thinks it must be magic, so he finds a sorceror who promises to defeat George's magic ('drycræft' - the 'dry' bit is somehow related to 'druid', I believe). Athanasius is the sorceror:

Athanasius then quickly took a large bowl, filled with deadly liquid, and dedicated all that drink to the devils, and gave it to [George] to drink, but it did not harm him.The sorceror tries again:

He took a cup filled with death-bearing drink and cried out to the black devils, and to the foremost devils, and to the powerful ones, and in their name he enchanted the terrible drink and gave it to the Lord's holy one to drink; but the devillish liquid did not harm him in the least.

Ælfric really gives those lines the sound of an incantation; it would be interesting to compare them to Old English charms. Is there meant to be a distinction between the black/foremost/powerful devils, or is it merely poetic variation? Either way, it has a resounding rhetorical flourish, and it's not like Ælfric to give the devil the best tunes.

The sorceror ends up converting to Christianity, by the way.

So St George... well, that's a pretty good story. And I'll admit that St George and the Dragon makes for excellent mummers' plays. But just look at these saints: