St Kenelm and 'Crabbing the Parson' 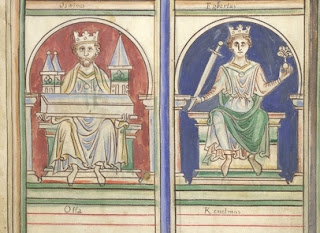 The story of the Anglo-Saxon saint Cynehelm, better known as St Kenelm, is (if any part of it is true) a sad one. According to legend, he was the son of an eighth-century king of Mercia who was murdered as a child by his older sister, who wanted to inherit the kingdom in his place. There are a good number of murdered royal princes with similar stories from the early Anglo-Saxon period - David Rollason (in ‘The cults of murdered royal saints in Anglo-Saxon England’, Anglo-Saxon England 11 (1983), 1-22) lists no fewer than twelve - but Kenelm achieved more fame than most; he was a well-known saint in the later Middle Ages, and the place of his burial, Winchcombe in Gloucestershire, was a popular site of pilgrimage.

Even by the standards of medieval hagiography, Kenelm's is a particularly souped-up saint's legend, where history and saint's life blend into fairy tale. As the South English Legendary tells it, the child Kenelm, 'King of the Mark' (i.e. Mercia) and pious at just seven years old, is murdered by a treacherous servant at the behest of his wicked sister. His body is hidden but a heavenly dove informs the Pope in Rome about Kenelm's murder, by dropping a scroll on the altar where he is saying Mass; the scroll is inconveniently in English, but the Pope finds someone to translate it and learns that it says 'In Clent, Cowbach, Kenelm the king's son lies under a thorn, his head cut off.' He sends messengers to the Archbishop of Canterbury, who investigates. The body of Kenelm is found where the scroll said it would be, his hidden grave guarded by a faithful cow (yes, really - hence 'Cowbach'! I suppose it's just a somewhat less dignified version of St Edmund's wolf). The body is taken to Winchcombe, and when the wicked sister sees it coming she tries to curse it by reading from her Psalter - but her eyes fall out of her head and she dies.  According to the South English Legendary, this Psalter was kept at Winchcombe, where any pilgrim who cared to see it could ascertain the truth of the story. That must have been quite the tourist attraction...

So that's the legend of Kenelm. He's mentioned by Chaucer in the Nun's Priest's Tale, because the prince famously had a dream warning him of his impending death - so Kenelm's story is cited as an example to prove that one ought to pay attention to dreams. Chaucer's learned cockerel Chaunticleer tells his wife "By God! I hadde levere than my sherte / That ye hadde rad his legende, as have I!" So if you take your reading suggestions from pompous, self-deluding chickens, here it is.

For more on Kenelm and his legend, see this excellent post. 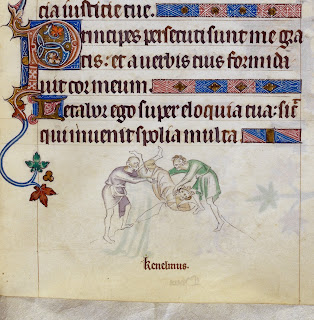 On a more frivolous note, this was the bit of lore associated with Kenelm which caught my eye:

For many years, villagers [at Kenelstowe in Worcestershire] celebrated St Cynehelm's Day (July 17) with a village fair and the ancient custom of "crabbing the parson" - bombarding the unfortunate cleric with a volley of crab apples.

Well, I was intrigued. Helpful Google led me to a charming book called The Rambler in Worcestershire, or, Stray Notes on Churches and Congregations, by a Mr John Noake, published in 1848. Mr Noake provides the following insight into 'crabbing the parson':

The last clergyman but one who was subjected to this process was a somewhat eccentric gentleman named Lee. He had been chaplain to a man-of-war, and was a jovial old fellow in his way, who could enter into the spirit of the thing. My informant well recollects the worthy divine, after partaking of dinner at the solitary house near the church, quietly quitting the table when the time for performing the service drew nigh, reconnoitring the angles of the building, and each "buttress and coign of vantage" behind which it was reasonable to suppose the enemy would be posted, and watching for a favourable opportunity, he would start forth at his best walking pace (he scorned to run) to reach the church. Around him, thick and fast, fell from ready hands a shower of crabs, not a few telling with fearful emphasis on his burly person, amid the intense merriment of the rustic assailants; but the distance is small; he reaches the old porch, and the storm is over.

Another informant, a man of Clent, states that he has seen the late incumbent, the Rev. John Todd, frequently run the gauntlet, and that on one occasion there were two sacks of crabs, each containing at least three bushels, emptied in the church field, besides large store of other missiles provided by other parties; and it also appears that some of the more wanton not unfrequently threw sticks, stakes, &c., which probably led to the suppression of the practice.

The custom of crabbing the parson is said to have arisen on this wise. "Long, long ago," an incumbent of Frankley, to which St. Kenelm's was attached, was accustomed, through horrid, deep-rutted, miry roads, occasionally to wend his way to the sequestered depository of the remains of the murdered Saint King, to perform divine service. It was his wont to carry creature comforts with him, which he discussed at a lone farmhouse near the scene of his pastoral duties. On one occasion, whether the pastor's wallet was badly furnished, or his stomach more than usually keen, tradition sayeth not, but having eat up his own provision, he was tempted (after he had donned his sacerdotal habit, and in the absence of the good dame) to pry into the secrets of a huge pot in which was simmering the savoury dinner the lady had provided for her household; among the rest, dumplings formed no inconsiderable portion of the contents; whether they were Norfolk or apple dumplings is not mentioned, but the story runs that our parson poached sundry of them, hissing hot, from the cauldron, and hearing the footsteps of his hostess, he, with great dexterity, deposited them in the ample sleeves of his surplice; she, however, was wide awake to her loss, and closely following the parson to the church, by her presence prevented him from disposing of them, and to avoid her accusation ("a guilty conscience needs no accuser") he forthwith entered the reading desk and began to read the service, John Clerk beneath making the responses. Ere long a dumpling slips out of the parson's sleeve, and falls plump on sleek John's head; he looks up with astonishment, but having ascertained that his reverence is not labouring under the effects of an emetic ("vomits" they called them in those days), John took the matter in good part, and proceeded with the service; by and bye, however, John's pate receives a second visitation, to which he, with upturned eyes and ready tongue, responded, "Two can play at that, master!" and suiting the action to the word, he forthwith began pelting the parson with crabs, a store of which he had gathered, intending to take them home in his pocket to foment the sprained leg of his jade of a horse; and so well did the clerk play his part that the parson soon decamped, amid the jeers of the old dame, and the laughter of the few persons who were in attendance; and in commemoration of this event (so saith the legend), "crabbing the parson" has been practised on the wake Sunday from that time till a very recent period.