A repost from two years ago. I've gone back and corrected the translation, though, because I like to think my Old English has got better in that time, although it's probably got worse ;) 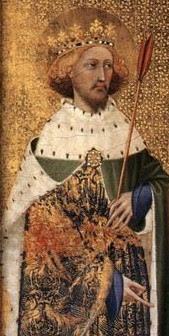 This is a tough day for me, loyalties-wise. On this day in 869, Edmund, King of East Anglia, was killed after refusing to submit to the Danish army who were ravaging his kingdom. Though I blithely say 'killed', I should mention that the (St Sebastian-influenced, but nonetheless widely accepted) story says he was tied to a tree, beaten, shot through with arrows like a hedgehog, and then beheaded. Before long he began to be revered as a martyr (that's what happens when you're killed by something called 'the Great Heathen Army') and got Bury St Edmunds named after him. His death became one of the defining images of Viking aggression, even among (later, Christian) Norse writers.

So today is rather a sad day for those of us who like both Old Norse and Old English, because a lot of the time Vikings wrote really good poetry and fantastic sagas, but then sometimes they also brutally murdered people.

Ælfric's Life of St Edmund is one of the texts most English students at Oxford study for the Old English Mods paper; it functions as a nice typical saint's life for beginners to read, and as a bonus features not only the aforementioned hedgehog parallel, but also Edmund's severed head calling out "here! here!" to the people looking for it. This story is consequently one of the things everyone knows, even non-medievalists. But it's not those colourful details I like best: my favourite part is the little dialogue when Edmund is deciding how to answer the Viking messenger who has come to tell him to submit to Ingvar. He consults with a bishop, who's frightened and says maybe he should just give in. This is how Ælfric describes Edmund's response:

Then the king became very quiet and looked at the ground, and at last said to him in a kingly manner: "Alas, bishop, the poor people of this land are shamefully mistreated, and it would now be preferable to me to fall in battle so that my people might continue to enjoy their land."

I love that moment of contemplation - "suwode... and beseah to þære eorþan" - and Ælfric's understated, near-tautological "cynelice". Edmund's concern for his people's welfare is one of his distinctive saintly attributes (he's particularly kind to widows, it says elsewhere). And here's why it's necessary:

And the bishop said, "Alas, dear king, your people lie slain, and you do not have sufficient forces with which you can fight, and these seamen will come and bind you alive unless you preserve your life by flight, or save yourself by yielding to him."
Then said Edmund the king, very bravely: "This I desire and wish in my mind, that I should not survive alone after my dear thanes, who have been suddenly slain in their beds by these seamen, with their children and their wives. It has never been my custom to flee; I would rather die, if necessary, for my own land; and almighty God knows that I will never turn aside from His worship, nor from His true love, whether I die or live."