Our Fathers That Begat Us

There haven't been enough pictures around here recently. And so, in no particular order, here's a collection of some stained-glass Anglo-Saxons, from various churches. The windows are mostly 20th-century, but revivalism is often just as dear to me as the real thing... It's important that this history is commemorated, and in the late 19th/early 20th centuries the English church understood that rather better than it does today. 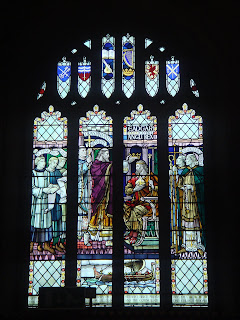 This is the coronation of King Edgar, from Bath Abbey. Edgar was the first English king to be crowned and consecrated in the way we would understand a coronation ceremony today; but his coronation took place when he had been king (and a very good king, at that) for fourteen years. The ceremony took place at Bath on Whitsunday, 973, and legend has it that Edgar was rowed up the river by six British kings who had submitted to his overlordship: 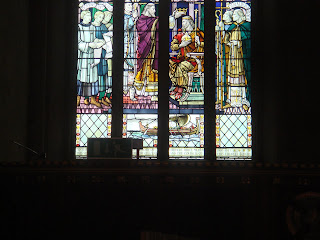 Hence the ship at the bottom. Note that he's being crowned by St Dunstan.

Here are some more kings, this time from Wells Cathedral. I got rather excited when I saw this window - six Anglo-Saxon kings all in one go! 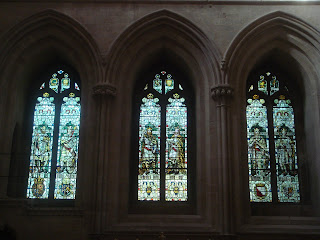 The text along the bottom reads "Let us now praise famous men and our fathers that begat us". The first king at the far left is Ine, king of Wessex between 688-726, who is mostly known for issuing one of the first law codes in Anglo-Saxon history, but who is commemorated at Wells because he founded its first church on the site of the present-day cathedral. The second from left is Egbert, king of Wessex from 802-839, who contributed to the final dominance of Wessex over the kingdom of Mercia (Wells is right in the heart of Wessex; in Mercia, and in Northumbria, and Kent they celebrate different Anglo-Saxon kings...): 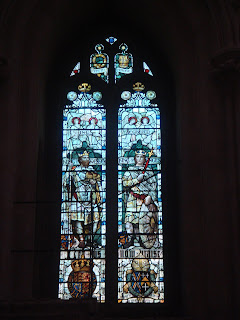 Next we have the wonderful Alfred the Great, about whom nothing need be said, and his son Edward the Elder. Note the book and sword which Alfred the warrior-philosopher king is holding. I can't quite work out what it is Edward the Elder has in his hands: 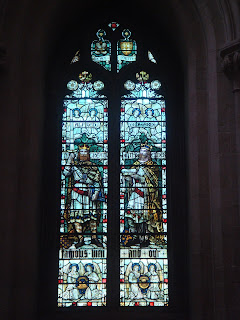 Then Athelstan, the victor of the battle of Brunanburh, a 'warrior king' indeed; and Edgar again. 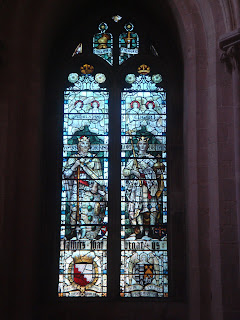 Alfred appears in a second window at Wells, I think in honour of his being the founder of the British navy: 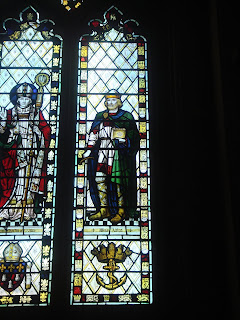 And of course then there's my own favourite, Edward the Confessor, sharing a window with St Dunstan: 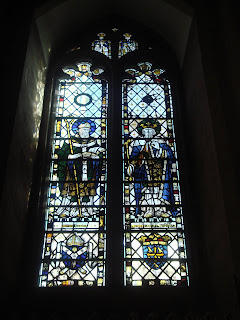 (Not a great photo, unfortunately, but I hope you can see that Edward is holding his emblem, a ring.)

Before we leave Wessex, here's a non-royal Anglo-Saxon: Eilmer the flying monk, from Malmesbury Abbey. Do read the link on him; he's just wonderful. An eleventh-century attempt at human flight! 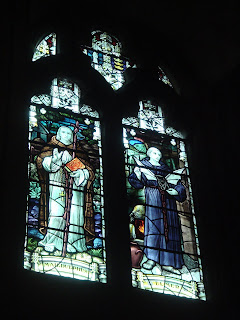 And also from Malmesbury, St Aldhelm, holding a plan of the monastery he founded (below). Although William of Malmesbury, next to him, isn't actually an Anglo-Saxon (since he lived in the twelfth century and all), it's nice that he should have a place here, since he was the first real scholar of Anglo-Saxon history. I use his work twenty times a day, and can only aspire to be half the historian he was. 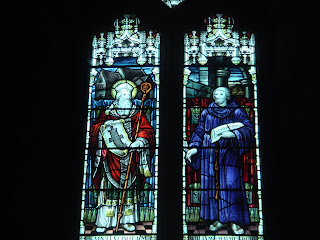 Also from Wessex, this is a good St Dunstan (again) at Selworthy, Somerset: 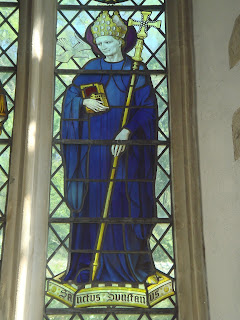 And a rather less good King Alfred, from Aller in the same county: 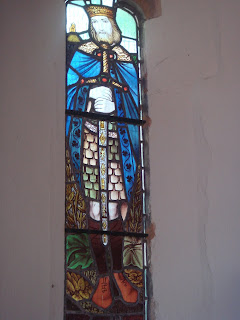 This commemorates one of the most important events of Alfred's reign, the peace treaty he signed with the Danes in which the Viking leader, Guthrum, agreed to be baptised with Alfred as his godfather. There's an indistinguishable lump of stone in the church which they say might be the font used in that baptism; well, you never know.

That will have to be enough for today; tomorrow, Northumbria and Kent.
Posted by Clerk of Oxford at 10:37 pm