More stained-glass Anglo-Saxons, though this time the windows are from Northumberland, and some of the people aren't Angles or Saxons at all. First, for instance, St Aidan of Lindisfarne: 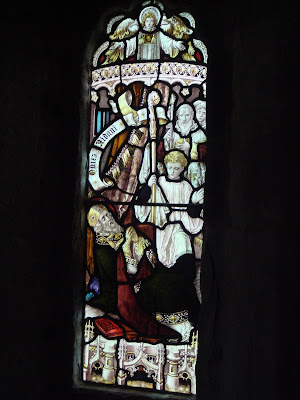 This is from the church at the royal castle at Bamburgh, the site of his death; it shows the moment of his death, which took place in 651.

And here we have lots of saints in one spectacular modern window. I think it's from the church of St Ebba in Beadnell, just down the coast from Bamburgh, but I took this picture a few years ago and now can't be sure. But that would explain why St Ebba is so prominent, so... 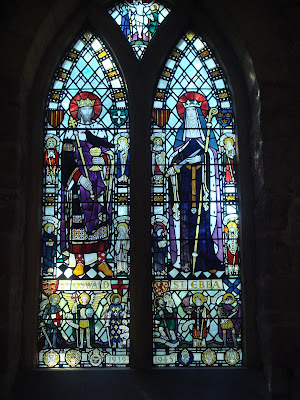 This is a really delightful composition. I particularly like the bearded Bede, intent on his book, and St Columba's flowing robes. 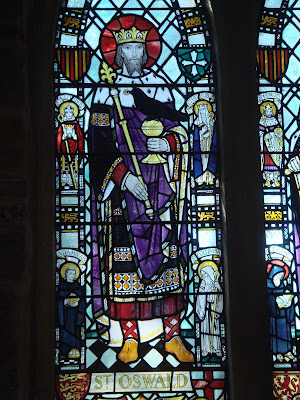 The saints along the bottom are beautifully done as well, especially Martin on the far right. It's a real gem, hidden away in a tiny church in a barely-there holiday village...
Posted by Clerk of Oxford at 9:13 am

Your are correct. The window is in St. Ebba, Parish Church of Beadnell in Northumberland. The window was commissioned as a memorial to those of the parish who made the ultimate sacrifice during World War II. The designer was Joseph Nuttgeyns.

Thank you for the information! It really is a lovely window.