More stained-glass Anglo-Saxons, this time from my own county of Kent. For some reason I can only find a set of windows from one church, at Minster-in-Thanet, but they're good ones.

You see, St Augustine landed near Minster, at Ebbsfleet, in 597: 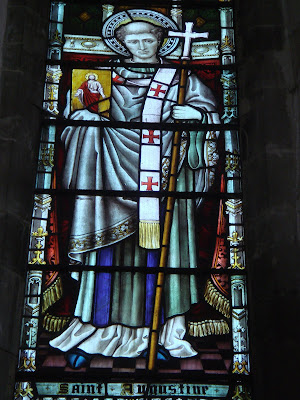 And began to evangelise the people of Kent: 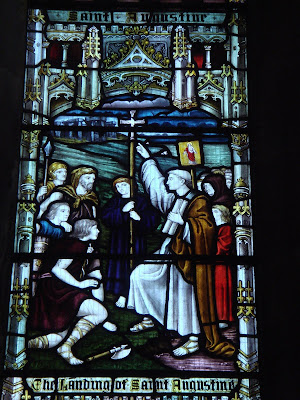 I like the axe casually cast aside on the ground in this window. I'm not sure why the building in the top left corner looks so much like Stonehenge - it might be meant to be the Roman fort of Richborough, not far from Ebbsfleet. If it isn't, it should be!

The main reason I like these windows is for this figure: 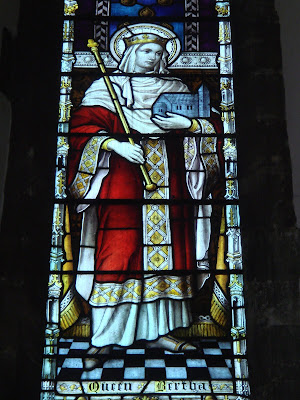 Bertha, wife of the King of Kent, was already a Christian, and had brought a Frankish bishop with her to England when she married King Ethelbert. With the permission of her pagan husband, she had restored a Roman church in Canterbury before the arrival of Augustine's mission; that's it in her arms, I think. It's St Martin's, the oldest parish church in continuous use in England. Her influence seems to have played an important part in encouraging her husband to accept Christianity. 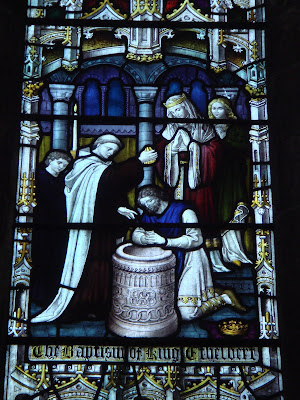 There she is in the background as Ethelbert is baptised; just beautiful. I think Bertha and St Margaret of Scotland would have found a lot in common.
Posted by Clerk of Oxford at 10:00 am