Accidental Delights of the Scholarly Life 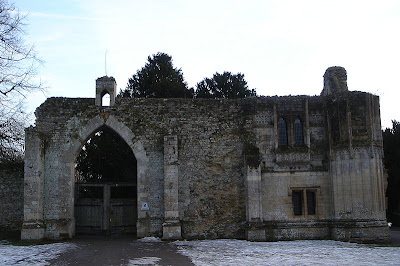 All that's left of Ramsey Abbey - the gatehouse

I just experienced one of those exciting coincidences which sometimes happens as you trawl through academic research. Today I learned for the first time (and this is probably something I should have known before, but we'll let that pass) that in 1068 William the Conqueror sent an embassy to King Sweyn of Denmark, seeking peace. As the nephew of Cnut, Sweyn had a claim to the English throne which was arguably stronger than William's; he was shortly to make good on this by sending a fleet to challenge William, though he was ultimately unsuccessful. Anyway, the interesting point to me (as someone who studies Scandinavian influence in medieval England) is that William took Sweyn's claims seriously enough to seek to make peace with him and forestall an invasion.

This was intriguing enough for my purposes; the Danes were still a real political force in England. Now, I was also interested in the fact that the leader of William's embassy was Æthelsige, abbot of Ramsey. Ramsey (which is now in Cambridgeshire, but at this time, before Cambridge existed, was in Huntingdonshire) was an abbey with strong Scandinavian connections, situated in the former Danelaw. Did William, I wondered, pick Æthelsige because he knew something about the Danes - maybe because he spoke their language? Ramsey is one of those obscure but fascinating Fenland abbeys I spend my time trying to make sense of; they seem to have cultivated a distinctive literary culture which was strongly linked to Denmark and Norway.

But then (and here's the coincidence), guess what happened to Æthelsige on the way back from Denmark? His ship got caught in stormy seas, and he made a promise that if he was saved he would establish the Feast of the Conception of the Virgin Mary in his monastery at Ramsey. That was, according to the Catholic Encyclopedia, the beginning of the feast in Norman England.

And you know what today is?
Posted by Clerk of Oxford at 2:37 pm