Why weepest thou so sore? 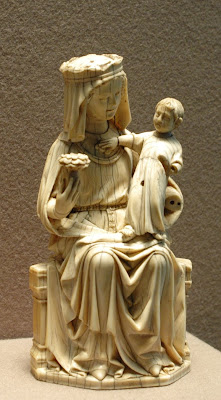 After reading up on 'Myn Lyking' the other day, I got to thinking about these medieval 'lullaby lyrics', in which the speaker watches the Virgin singing a lullaby to the baby Christ. There are a fair number of them, as it seems to have become an increasingly popular genre over the course of the 14th-15th century.

At the same time, English poets and preachers were beginning to make more use of the Pieta image - Mary holding the body of the dead Christ - and the opportunity for poetic contrast between the two is clear. Often the lullabies have the infant Christ speaking about his future death, or make some other reference to it; and this poem makes a really wonderful use of the opposite idea, as Mary recalls Christ's babyhood while embracing his dead body. Some of the poems step a little close to sentimentality for modern taste, but others are very effective. Over the next few weeks, I want to dig out and post about some of the lullabies (the Pieta lyrics will have to wait until Easter!).

But before I do that, I want to post a twist on the genre. This poem is sometimes called the "Adult Lullaby", and has been recorded under that name, but like the vast majority of medieval poems it originally didn't have a title. It's not an adult lullaby; it's addressed to a crying child, but it's profoundly uncomforting. And yet, it is tender and gentle, and very beautiful. Here it is in Middle English, with my translations, and here's a link to a reading of the poem:

[Animals and birds, fishes in the water, and every living creature made of bone and blood - when they come into the world, they do themselves some good, all except the poor wretch who is of Adam's blood.  Lullay, lullay, little child, you are destined to sorrow: you do not know that the world's wilds lie before you!]

[Child, if it should happen that you should grow and thrive, remember that you were brought up at your mother's knee.  Always recall in your heart these three things: whence you came, what you are, and what shall become of you.  Lullay, lullay, little child, child, lullay, lullow; with sorrow you came into the world, with sorrow you shall leave it.]

Ne tristou to this world, hit is thi ful vo.
The rich he makith pouer, the pore rich also;
Hit turneth wo to wel and ek wel to wo.
Ne trist no man to this world, whil hit turnith so.
Lollai, lollai, litil child, thi fote is in the whele.
Thou nost whoder turne to wo other wele.

[Do not trust to this world, it is entirely your enemy.  It makes the rich poor, and the poor rich also; it turns woe to joy and also joy to woe.  Let no man trust to this world, while it turns so!  Lullay, lullay, little child, your foot is in the wheel; you do not know where it will turn, to woe or joy.]

Child, thou ert a pilgrim in wikidnis ibor,
Thou wandrest in this fals world, thou loke the bifor.
Deth ssal com with a blast vte of a well dim horre
Adamis kin dun to cast, him silf hath ido befor.
Lollai, lollai, litil child, so wo the worth Adam
In the lond of paradis, throgh wikidnes of Satan.

[Child, you are a pilgrim born in wickedness, and you wander in this false world; look before you!  Death will come suddenly with a blast 'out of a well dim horre', to cast down Adam's kin, as he has often done before.  Lullay, lullay, little child, Adam made this woe for you, in the land of Paradise, through the wickedness of Satan.]

Child, thou nert a pilgrim bot an vncuthe gist,
Thi dawes beth itold, thi iurneis beth icast;
Whoder thou salt wend north or est,
Deth the sal betide with bitter bale in brest.
Lollai, lollai, litil child, this wo Adam the wroght,
Whan he of the appil ete and Eue hit him betacht.

[Child, you are not a pilgrim but an unknown guest: your days are counted, your journeys are cast.  Wherever you may go, to the north or east, death will come to you with bitter sorrow at your heart.  Lullay, lullay, little child, Adam wrought this woe for you, when he ate the apple and Eve gave it to him.]

The meaning of 'out of a well dim horre' is not at all clear, and so I haven't tried to translate it.
Posted by Clerk of Oxford at 11:46 pm

The footnote of the transcription that I have defines "a wel dim hore" as a "very dark mist, quite obscuring fog."

This is lovely, thank you.