A record of "the first historically attested grave-robbing in England", from the eighth-century Life of St Guthlac:

"There was a mound built of clods of earth which greedy comers to the waste had dug open, in the hope of finding treasure there... and in this Guthlac the man of blessed memory began to dwell, after building a hut over it."

St Guthlac (b.674) was a nobly-born soldier from the Anglo-Saxon kingdom of Mercia, who had repented of his warlike life and become a monk. Seeking a place where he could live as a hermit, he came to the marshy wasteland of the Fens and settled at Crowland (now in Lincolnshire) in 699. He made his hermitage in what was probably an ancient long barrow - though the grave-robbers had been there first.

This cell is traditionally supposed to have been at a site called Anchor Church (or Anchorite) hill, about a quarter of a mile north-east of the site of present-day Crowland Abbey. Until 1866 the site was owned by the Hickling family, whose name may or may not (over the course of 1200 years) be connected to the tribe of Guthlac's ancestors, the Iclingas. 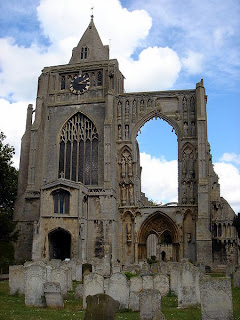 This is what's left of Crowland Abbey now. The poet John Clare, who was born not far away in Helpston, wrote the following rather Gothic sonnet about this glorious ruin:

In sooth, it seems right awful and sublime
To gaze by moonlight on the shattered pile
Of this old Abbey, struggling still with Time,­—
The grey owl hooting from its rents the while;
And tottering stones, as wakened by the sound,
Crumbling from arch and battlement around,
Urging dread echoes from the gloomy aisle,
To sink more silent still. — The very ground
In Desolation’s garment doth appear,
The lapse of age and mystery profound.
We gaze on wrecks of ornamented stones,
On tombs whose sculptures half erased appear,
On rank weeds, battening over human bones,
Till even one’s very shadow seems to fear.


More on Crowland the courteous.
Posted by Clerk of Oxford at 4:00 pm