I love this kind of thing: a new children's book involving Vikings. I discovered it by accident, and it looks very cool.

Cute little Vikings are, though a contradiction in terms, always awesome. Case in point: 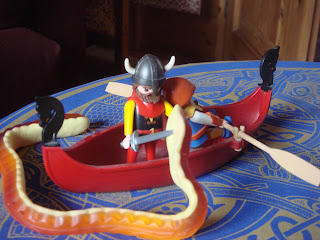 That may or may not be a picture of my own Playmobil Vikings re-enacting the fight between Thor and the Midgard serpent. With a gummy worm.

My ultimate aim is to be able to recreate my entire thesis through the medium of Playmobil. Since they already make castles, dragons and Viking ships, I'm well on my way; when they introduce a range of Playmobil monasteries, I think this goal will finally be achievable.

But seriously, the book looks good; plus, the little Viking is called Knut, and I think we all know that's the best Viking name...


ETA: this is probably also the place to post this link which very much amused me a while ago. Because all that stuff is true and yes, Knut really was just that awesome.
Posted by Clerk of Oxford at 2:58 pm

Now, here's a fellow academic I can understand!

This is how all academia should be done!