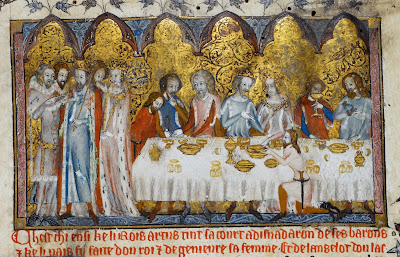 
The week following Pentecost is a lost holiday. From the Middle Ages until the early 20th century the period around Whitsun was the principal summer holiday of the year - especially Whit-Monday, i.e. today. It was the time for fairs, Morris dancing, games, ale-drinking, school and church processions, weddings, wandering into the countryside, and generally having a good time. Sadly the decision to fix the Spring Bank Holiday to the last Monday in May has pretty much destroyed all sense of the season - even the name 'Whitsun' (the English name for the feast since at least the eleventh century) is increasingly forgotten.

So, like me, you are probably doing nothing to mark this day. But here are some of the things you could once have been doing (from this site):

In medieval Western Europe, Pentecost was a period of great festivity, and was considered a day of more importance than can be easily explained by the incidents connected with it, recorded in the gospel, or by any later Christian legends attached to it. It was one of the great festivals of the kings and great chieftains in the medieval romances. It was that especially on which King Arthur is represented as holding his most splendid court. The sixth chapter of the Morte d’Arthur of Sir Thomas Malory, tells us how, "Then King Arthur removed into Wales, and 'let crie a great feast that it should be holden at Pentecost, after the coronation of him at the citie of Carlion.'" And chapter one hundred and eighteen adds, 'So King Arthur had ever a custome, that at the high feast of Pentecost especially, afore al other high feasts in the yeare, he would not goe that day to meat until he had heard or seene some great adventure or mervaile. And for that custom all manner of strange adventures came before King Arthur at that feast afore all other feasts.'

It was in Arthur's grand cour pleniere at the feast of Pentecost, that the fatal mantle was brought which threw disgrace on so many of the fair ladies of his court. More substantial monarchs than Arthur held Pentecost as one of the grand festivals of the year; and it was always looked upon as the special season of chivalrous adventure of tilt and tournament. In the romance of Bevis of Hampton, Pentecost, or, as it is there termed, Whitsuntide, appears again as the season of festivities:

In somer at Whitsontyde,
Whan knightes most on horsebacke ride,
A tours let they make on a daye,
Steedes and palfraye for to assaye,
Whiche horse that best may ren.

... Whitsuntide still is, and always has been, one of the most popularly festive periods of the year. It was commonly celebrated in all parts of the country by what was termed the Whitsun-ale, and it was the great time for the morris-dancers. In Douce's time, that is, sixty or seventy years ago [before 1869], a Whitsun-ale was conducted in the following manner:

'Two persons are chosen, previously to the meeting, to be lord and lady of the ale, who dress as suitably as they can to the characters they assume. A large empty barn, or some such building, is provided for the lord's hall, and fitted up with seats to accommodate the company. Here they assemble to dance and regale in the best manner their circumstances and the place will afford; and each young fellow treats his girl with a riband or favour. The lord and lady honour the hall with their presence, attended by the steward, sword-bearer, purse-bearer, and mace-bearer, with their several badges or ensigns of office. They have likewise a train-bearer or page, and a fool or jester, drest in a party-coloured jacket, whose ribaldry and gesticulation contribute not a little to the entertainment of some part of the company. The lord's music, consisting of a pipe and tabor, is employed to conduct the dance.'

These festivities were carried on in a much more splendid manner in former times, and they were considered of so much importance, that the expenses were defrayed by the parish, and charged in the churchwardens' accounts. Those of St. Mary's, at Reading, as quoted in Coates's History of that town, contain various entries on this subject, among which we have, in 1557: 'Item payed to the morrys daunsers and the mynstrelles, mete and drink at Whytsontide, iijs. iiijd.' The churchwardens' accounts at Brentford, in the county of Middlesex, also contain many curious entries relating to the annual Whitsun-ales in the seventeenth century; and we learn from them, as quoted by Lysons, that in 1621 there was 'Paid to her that was lady at Whitsontide, by consent, 5s.' Various games were indulged in on these occasions, some of them peculiar to the season, and archery especially was much practised. The money gained from these games seems to have been considered as belonging properly to the parish, and it is usually accounted for in the church-wardens' books, among the receipts, as so much profit for the advantage of the parish, and of the poor...

Ale was so prevalent a drink amongst us in old times, as to become a part of the name of various festal meetings, as Leet-ale, Lamb-ale, Bride-ale, and, as we see, Whitsun-ale. It was the custom of our simple ancestors to have parochial meetings every Whitsuntide, under the auspices of the churchwardens, usually in some barn near the church, all agreeing to be good friends for once in the year, and spend the day in a sober joy. The squire and lady came with their piper and taborer; the young danced or played at bowls; the old looked on, sipping their ale from time to time. It was a kind of pic-nic, for each parishioner brought what victuals he could spare. The ale, which had been brewed pretty strong for the occasion, was sold by the churchwardens, and from its profits a fund arose for the repair of the church. In latter days, the festival degenerated, as has been the case with most of such old observances; but in the old times there was a reverence about it which kept it pure. Shakespeare gives us some idea of this when he adverts to the song in Pericles:

'It hath been sung at festivals,
On ember eves, and holy ales.'

And further, from here:

Whit walks (or simply ‘Whits’), in which church congregations processed through the streets in their best clothes, were popular, and payments of ‘Whitsun farthings’ were often made to churches for repairs. Parishes also held Whitsun Church Ales across Whitsuntide from Whit Monday to Whit Wednesday, to raise money for charity. Whitsun was a popular holiday because of the likelihood of good weather (good weather on the day promises a good harvest), and these festivities tended to be organized affairs. Church Ales became a focus for parades, fairs, markets, circuses, cricket matches, regattas, displays of archery practice, and country sports such as wrestling, climbing the greasy pole, and even sack races and donkey derbies, and of course Morris dancing: Shakespeare mentions Whitsun Morris dancing in Henry V (II.iv.25). Miracle and Mystery Plays were performed, as at Chester (again mentioned by Shakespeare in The Winter’s Tale, IV.iv.134)...

Milk and cream were seasonal fare for Whitsun feasts, as were gooseberries and cheesecakes, and regional food was celebrated, from squab pie in Cornwall to mutton pie in Oxford, to local cakes. As at Easter, it was good luck to wear new clothes at Whitsun, which added to the festivity and colour and general extravagance.


From medieval knights to Shakespeare's Morris dancers and Manchester mill-workers, Whitsuntide is a season hallowed by many centuries of happy holiday. Do something fun today; it's your ancient right. 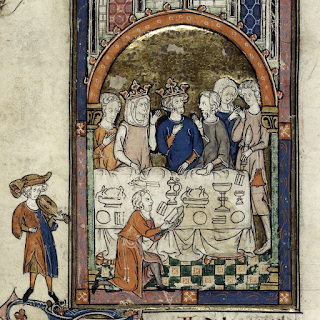