'A happy day at Whitsuntide' 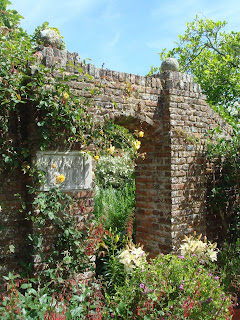 Speaking of Whitsuntide revelries, here's a pleasant poem by William Barnes (1801-1886), the dialect poet and (I have just learned) Anglo-Saxon linguistic purist, in that he favoured the use of Old English words over French-derived ones. He's best known, to me at least, as the author of 'Linden Lea', which was set to music so beautifully by Vaughan Williams. Barnes wrote in the Dorset dialect, and you will notice that he shares some linguistic features with yesterday's West Country man, William Herebert, though he lived nearly six hundred years later.

A happy day at Whitsuntide,
As soon ’s the zun begun to vall,
We all stroll’d up the steep hill-zide
To Meldon, gret an’ small;
Out where the Castle wall stood high
A-mwoldren to the zunny sky.

An’ there wi’ Jenny took a stroll
Her youngest sister, Poll, so gay,
Bezide John Hind, ah! merry soul,
An’ mid her wedlock fay;
An’ at our zides did play an’ run
My little maid an’ smaller son.

There, down the roofless wall did glow
The zun upon the grassy vloor,
An’ weakly-wandren winds did blow,
Unhinder’d by a door;
An’ smokeless now avore the zun
Did stan’ the ivy-girded tun.

My bwoy did watch the daws’ bright wings
A-flappen vrom their ivy bow’rs;
My wife did watch my maid’s light springs,
Out here an’ there vor flow’rs;
And John did zee noo tow’rs, the place
Vor him had only Polly’s face.

An’ there, of all that pried about
The walls, I overlook’d em best,
An’ what o’ that? Why, I made out
Noo mwore than all the rest:
That there wer woonce the nest of zome
That wer a-gone avore we come.

When woonce above the tun the smoke
Did wreathy blue among the trees,
An’ down below, the liven vo’k
Did tweil as brisk as bees:
Or zit wi’ weary knees, the while
The sky wer lightless to their tweil.
Posted by Clerk of Oxford at 6:21 pm