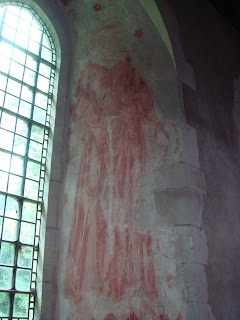 One of the earliest English depictions of St Francis of Assisi (whose feast day is today): a mid-thirteenth-century wall-painting from the church at Doddington, Kent.

Doddington also has this decorative painting around the other side of the window: 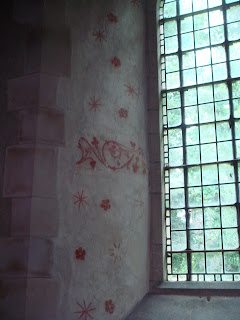 And a figure who is apparently supposed to be Henry III (1207-1272), although why on earth anyone would want a painting of Henry III right next to the altar, I don't know. The paintings were executed in his reign, but that still seems an odd reason to depict him in a church. I can't think of any parallels - it's like the medieval equivalent of the modern practice of hanging a portrait of the Queen in a village hall, and that can't have been at all common. 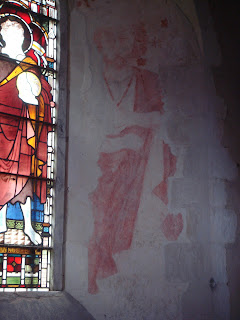 However, if this church was up-to-date enough to have a picture of St Francis within thirty years of his death, perhaps they were rather cutting-edge by thirteenth-century standards. When the Franciscan order arrived in England in 1224, their first base was at Canterbury - where their chapel survives - and Doddington (near Sittingbourne) is not far off the main road from Canterbury to London; perhaps some of those Franciscans who dispersed throughout England "as thick as motes in a sun-beam" (in Chaucer's words) passed through Doddington, and inspired someone to decorate the church with the latest saint. 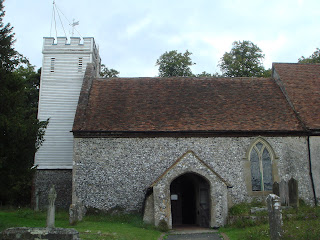 The church at Doddington bears an unusual dedication to the Beheading of John the Baptist. I went there on that feast-day (August 29) this year - by accident. Funny how that works.
Posted by Clerk of Oxford at 10:48 am