Lady, by one light only We look from Alfred's eyes 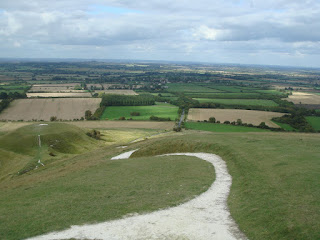 I've been meaning to post this for a while, and the anniversary of the death of Alfred the Great is as good a day as any. It's from the prologue to G. K. Chesterton's 'Ballad of the White Horse', his poem about Alfred's battles against the Danes - about order triumphing over chaos.

I feel that as a fan of the Vikings, I can't quite endorse the idea of calling them "green devils out of the sea, with sea-plants trailing heavily and tracks of opal slime"; but otherwise this is awesome. It also contains some beautiful and heartfelt love poetry, addressed to his wife.

You can read the whole thing here.


Gored on the Norman gonfalon
The Golden Dragon died:
We shall not wake with ballad strings
The good time of the smaller things,
We shall not see the holy kings
Ride down by Severn side.

Stiff, strange, and quaintly coloured
As the broidery of Bayeux
The England of that dawn remains,
And this of Alfred and the Danes
Seems like the tales a whole tribe feigns
Too English to be true.

Of a good king on an island
That ruled once on a time;
And as he walked by an apple tree
There came green devils out of the sea
With sea-plants trailing heavily
And tracks of opal slime. 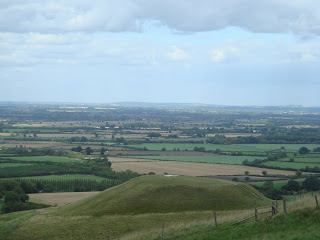 Yet Alfred is no fairy tale;
His days as our days ran,
He also looked forth for an hour
On peopled plains and skies that lower,
From those few windows in the tower
That is the head of a man.

But who shall look from Alfred's hood
Or breathe his breath alive?
His century like a small dark cloud
Drifts far; it is an eyeless crowd,
Where the tortured trumpets scream aloud
And the dense arrows drive.

Lady, by one light only
We look from Alfred's eyes,
We know he saw athwart the wreck
The sign that hangs about your neck,
Where One more than Melchizedek
Is dead and never dies.

Therefore I bring these rhymes to you
Who brought the cross to me,
Since on you flaming without flaw
I saw the sign that Guthrum saw
When he let break his ships of awe,
And laid peace on the sea. 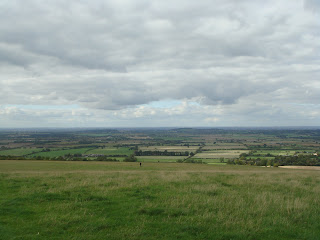 Do you remember when we went
Under a dragon moon,
And 'mid volcanic tints of night
Walked where they fought the unknown fight
And saw black trees on the battle-height,
Black thorn on Ethandune?

And I thought, "I will go with you,
As man with God has gone,
And wander with a wandering star,
The wandering heart of things that are,
The fiery cross of love and war
That like yourself, goes on."

O go you onward; where you are
Shall honour and laughter be,
Past purpled forest and pearled foam,
God's winged pavilion free to roam,
Your face, that is a wandering home,
A flying home for me.

Ride through the silent earthquake lands,
Wide as a waste is wide,
Across these days like deserts, when
Pride and a little scratching pen
Have dried and split the hearts of men,
Heart of the heroes, ride.

Up through an empty house of stars,
Being what heart you are,
Up the inhuman steeps of space
As on a staircase go in grace,
Carrying the firelight on your face
Beyond the loneliest star.

Take these; in memory of the hour
We strayed a space from home
And saw the smoke-hued hamlets, quaint
With Westland king and Westland saint,
And watched the western glory faint
Along the road to Frome. 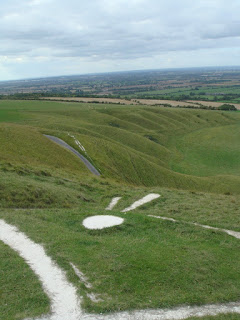 Pictures of Oxfordshire and Berkshire taken from the hill of the Uffington White Horse, last September.
Posted by Clerk of Oxford at 12:10 pm