A Month Since Michaelmas 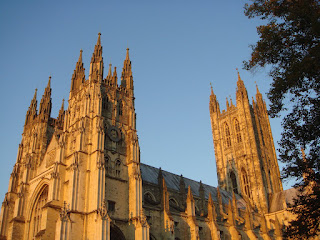 These are some pictures I took a month ago, on Michaelmas day, at Canterbury. I was there for Evensong, but not because it was Michaelmas - because it was the 1000th anniversary of the day the city fell to the Vikings. I had forgotten that day fell on Michaelmas (even though it's right there in the Anglo-Saxon Chronicle entry, so I should have remembered), though Michaelmas is, of course, a rather important feast in Oxford terms, the day for which the autumn term is named. 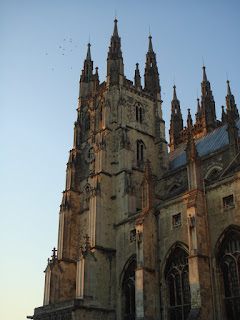 The cathedral was all in gold. There's a particular time of year when Evensong falls exactly at the right time - so that you go inside in late afternoon sunshine and come out to find the sun has just set. All the hours of the day (in the monastic sense) mark stages, and while Evensong is always beautiful - and in one way, always the same - it's different when the whole service takes place in complete winter darkness or in bright, unchanging summer sunlight. That evening was like that; it gets dark just too early now, and certainly will be too late after tomorrow when the clocks go back. The perfect time must be the last week in September. 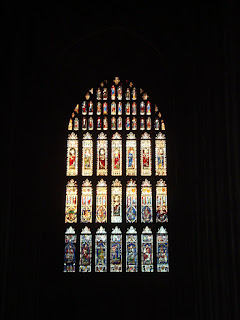 This was the west window, towards the end of the service, when (for the part which commemorated the Viking siege) the clergy and congregation processed out of the choir and into the nave. This window confronted us as we came through the door, the grand golden steps down to the nave spread out before us. 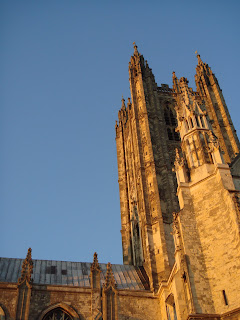 As the choir left the nave, they sang 'Rorate caeli' - a glorious touch, considering the occasion. It was such a stroke of genius that I wanted to congratulate someone for it, but wouldn't have known whom to praise. 'The holy cities are a wilderness' - the writer of the Anglo-Saxon Chronicle himself couldn't have chosen a more fitting lament. 'Þær man mihte ða geseon yrmðe þær man oft ær geseah blisse on þære earman byrig þanon com ærest Cristendom 7 blis for Gode 7 for worulde' ('there wretchedness might be seen where bliss had often been seen before, in that wretched town from where there first came to us Christianity and joy before God and before the world') might almost be the Anglo-Saxon version of the passage from Isaiah on which 'Rorate caeli' is based. 'Our holy and glorious temple, where our ancestors praised you, has been burned with fire...'

The chant continued as the choir disappeared into the darkness of the church, echoing to the last distant note. 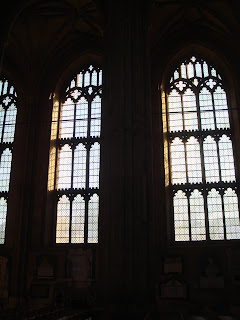 Particularly memorable to me was the moment at the beginning of the service, when I chose, almost at random, a rather obscure seat some way from the choir (a poor strategical choice, made on impulse; despite the impression one might justly get from how often I post about Canterbury Cathedral, I find the people a little intimidating). So it was entirely by chance that I found I was sitting in a dazzling shaft of sunlight, the last light of the setting sun, coming through this window high in the west side of the south porch:

The sun was so bright it almost blinded me (this picture was taken afterwards, when it had subsided a little). It was a real 'gleam of glory'. And the saint who shone so startlingly on me, on that Michaelmas day?

St Michael, of course.
Posted by Clerk of Oxford at 9:50 pm