So deep within mine heart 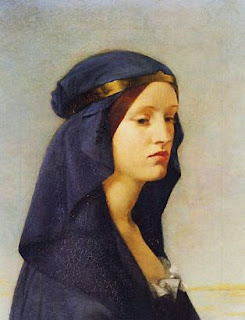 This poem comes from a late fifteenth century manuscript (the Findern MS.) which is somewhat unusual in medieval terms because it is generally thought to have been owned, read and probably written by women. There aren't a lot of female medieval poets, but this might be the work of one of them. Despite the pitiful subject, the rhyme scheme keeps things fairly bright; it would make a good song.

Continuance
Of remembraunce
Withoute ending,
Doth me penaunce
And grete grevaunce,
For your partinge.

So depe ye be
Gravene, parde,
Within mine hert,
That afore me
Ever I you see
In thought covert.

Though I ne plain
My woful pain,
But bere it still;
It were in vain
To say again
Fortune's will.

(The continuance of memory, without end, does me pain and great grief because of your absence. By God! so deeply are you engraved within my heart that I see you ever before me, in secret thought - though I do not lament my sorrowful woe, but bear it still: it is vain to speak against Fortune’s will.)


(The obligatory miserable-looking female is 'Elgiva', by Joanna Boyce (1831-1861). Apparently the subject is this Anglo-Saxon queen, which just seems strange to me; but it's a beautiful picture.)
Posted by Clerk of Oxford at 12:14 pm