The Shrine of St Augustine at Ramsgate 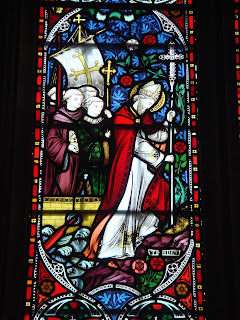 Some wonderful news in the wake of Pugin's bicentenary, from here:


Archbishop Peter Smith of Southwark has formally established Pugin’s church of St Augustine in Ramsgate as a shrine of the ‘the Apostle of the English’. In an official decree the Archbishop grants the shrine canonical privileges and designates it as a place of pilgrimage.

A shrine to St Augustine existed on the Isle of Thanet before the Reformation and so this new place of pilgrimage recovers an ancient tradition. St Augustine’s is a Catholic church already dedicated to the saint and stands closer than any other to the place of Augustine’s landing, his first preaching and his momentous encounter with King Ethelbert of Kent in 597AD.

The official day on which the foundation of the shrine will be remembered is 1st March. This is Pugin’s birthday and recently the day of popular bicentenary celebrations held in his honour. This day links the erection of the shrine with the church’s founder who is buried within. The cult of St Augustine is fully in tune with the heart and mind of Augustus Welby Northmore Pugin (1812-1852). He states in his letters that he selected the Ramsgate site because ‘blessed Austin landed nearby’ and he personally chose the dedication name and wanted the church to be a memorial to the founding identity of Christian England and its early saints.

There already exists a strong local interest and devotion to the saint. His feast day each year in celebrated in Ramsgate with a festival of Catholic history and culture called ‘St Augustine’s week’. Prayers are said and hymns sung in his honour. St Augustine’s has already functioned as a quasi-shrine and pilgrims already journey there from all over England and beyond to learn about the conversion of the English and the beginnings of Christianity in this land. In 1997 thousands descended upon the St Augustine’s site to celebrate 1500th anniversary of the Augustine landing. Hundreds of monks joined Cardinal Hume and Archbishop Bowen in the pilgrimage. In the year 2000 St Augustine’s was a ‘Jubilee Shrine’ and had special indulgences attached. This continued a long pilgrimage tradition surrounding St Augustine in Ramsgate and Thanet.

Fr Marcus Holden the parish priest and custodian of St Augustine’s commented, ‘This is amazing news for us. Pugin’s church is secured by this added living identity which also fulfils many of his own dreams in honouring the English saints and St Augustine in particular. There was need here not only to rescue the church as a great work of art but also to find a fitting spiritual significance for the future of the site. Through his decree, the Archbishop has done just that. The shrine will now draw pilgrims keen to learn about the early saints and to pray for an evangelisation of England in our own times’.

The church is presently being restored and brought back to its former glory and major celebrations are planned this year surrounding the feast day of St Augustine.

This is fantastic news! I wrote in my first post on St Augustine's about the various saints of the Anglo-Saxon church who are prominently commemorated there, and it's wonderful to see this officially recognised. In my previous post I touched on the idea that the existence of St Augustine's, Ramsgate goes some way to remedy the loss of the abbey of St Augustine's, Canterbury. From the very early days of Augustine's mission, Canterbury had two significant religious communities, centres of art, learning and literature whose importance it is difficult to overstate; today Christ Church lives on through the cathedral, but of St Augustine's, now in ruins, barely a shadow survives. The original shrine of St Augustine, at the site of his burial, was destroyed at the Reformation (unless it's at Fordwich or Chilham, as I mentioned the other day!). This new shrine repairs a wrong.

I was present at the celebrations for the 1400th anniversary of Augustine's landing in 1997 mentioned in the article; I remember it fondly, though I didn't know then that I would ever come to care quite so much about the medieval history of Canterbury (to be fair, I was only eleven years old). Let's hope for many more such celebrations to come.
Posted by Clerk of Oxford at 9:17 pm