As described in Surprised by Joy, recalling the time he spent in Great Bookham in Surrey under the tutelage of William Kirkpatrick, 'the Great Knock':


We now settled into a routine which has ever since served in my mind as an archetype, so that what I still mean when I speak of a "normal" day (and lament that normal days are so rare) is a day of the Bookham pattern. For if I could please myself I would always live as I lived there. I would choose always to breakfast at exactly eight and to be at my desk by nine, there to read or write till one. If a cup of good tea or coffee could be brought me about eleven, so much the better. A step or so out of doors for a pint of beer would not do quite so well; for a man does not want to drink alone and if you meet a friend in the taproom the break is likely to be extended beyond its ten minutes. At one precisely lunch should be on the table; and by two at the latest I would be on the road. Not, except at rare intervals, with a friend. Walking and talking are two very great pleasures, but it is a mistake to combine them. Our own noise blots out the sounds and silences of the outdoor world; and talking leads almost inevitably to smoking, and then farewell to nature as far as one of our senses is concerned. The only friend to walk with is one (such as I found, during the holidays, in Arthur) who so exactly shares your taste for each mood of the countryside that a glance, a halt, or at most a nudge, is enough to assure us that the pleasure is shared.

The return from the walk, and the arrival of tea, should be exactly coincident, and not later than a quarter past four. Tea should be taken in solitude, as I took it as Bookham on those (happily numerous) occasions when Mrs. Kirkpatrick was out; the Knock himself disdained this meal. For eating and reading are two pleasures that combine admirably. Of course not all books are suitable for mealtime reading. It would be a kind of blasphemy to read poetry at table. What one wants is a gossipy, formless book which can be opened anywhere. The ones I learned so to use at Bookham were Boswell, and a translation of Herodotus, and Lang's History of English Literature. Tristram Shandy, Elia and the Anatomy of Melancholy are all good for the same purpose. At five a man should be at work again, and at it till seven. Then, at the evening meal and after, comes the time for talk, or, failing that, for lighter reading; and unless you are making a night of it with your cronies (and at Bookham I had none) there is no reason why you should ever be in bed later than eleven. But when is a man to write his letters? You forget that I am describing the happy life I led with Kirk or the ideal life I would live now if I could. And it is essential of the happy life that a man would have almost no mail and never dread the postman's knock. 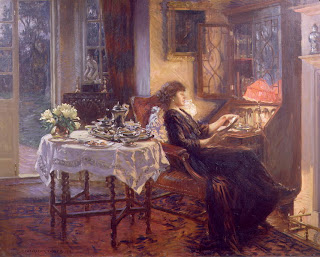 Lewis lived at Bookham between the ages of 15 and 18, from September 1914 until April 1917, when he went up to University College, Oxford. This is a strange isolated life for a teenage boy, but it does sound like a pleasant and a peaceful one. No mail would, of course, have to include no email...
Posted by Clerk of Oxford at 11:31 am

This was always my favorite chapter in Surprised By Joy. Thanks for this post. Have just found your blog and have only just put my toe
in the water. Most enjoyable.

Thank you! Lewis does paint an appealing picture here, doesn't he? I wish I could remember to try and emulate this orderly, productive way of life more often.

Rereading Surprised by Joy and was so enthralled by this description of Lewis' perfect day. There is so much to learn from this man.