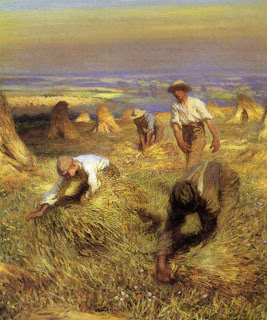 August 1st is Lammas Day, the earliest Anglo-Saxon festival of the harvest - a day of first-fruit offerings, on which loaves of bread made from the first corn were blessed. The word comes from the Old English hlaf, 'loaf' + mæsse, 'mass'. And if you want to see the word hlafmæssedæg in the wild, as it were, there's an Anglo-Saxon charm for the protection of grain that goes like this:


So this is what you should do to protect your harvested corn from mice and other pests:

[Take two] long pieces of four-edged wood, and on each piece write a Pater noster, on each side down to the end. Lay one on the floor of the barn, and lay the other across it, so that they form the sign of the cross. And take four pieces of the hallowed bread which is blessed on Lammas day, and crumble them at the four corners of the barn. This is the blessing [you should say] for that: "So that mice do not harm these sheaves, say prayers over the sheaves and do not cease from saying them. City of Jerusalem [?], where mice do not live they cannot have power, and cannot gather the grain, nor rejoice with the harvest." This is the second blessing: Lord God Almighty, who made heaven and earth, bless these fruits in the name of the Father and the Holy Spirit. Amen. And [then say] a Pater Noster."


I'd welcome a better translation of the first Latin section if anyone can provide one; the second is obvious enough, but I can't make much sense of the first. This is one of those fascinating mixtures of folk-custom and Christianity which you often get in Anglo-Saxon charms - is this pagan magic or Christian ritual? Or both? It's hard to tell. The manuscript from which this charm comes (British Library, Cotton Vitellius E xviii) was written in a monastery at Winchester in c.1030 - perhaps the very heart of Christian orthodoxy in Anglo-Saxon England - and this charm survives alongside other prayers, rituals and an assorted collection of highly useful information: good and bad days for bloodletting, how to cure sick cattle and sheep, how to keep people from stealing your bees, the most lucky days for childbirth, and so on. (A list can be seen here). Since Lammas itself, like many agricultural festivals, is a place where Christian and pagan practices find common ground in a universal human need - daily bread - it's no wonder its blessing had a special power. 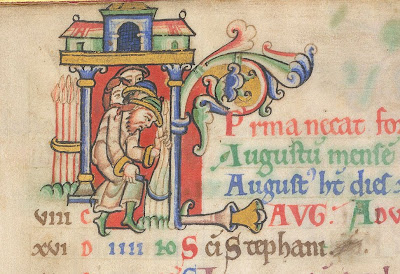 On another note, what really intrigued me today when I looked up the word 'Lammas' was the third definition in the OED entry:

1576 GASCOIGNE Steele Glas. This is the cause (beleue me now my Lorde)...That courtiers thriue, at latter Lammas day.

1857 KINGSLEY Two Years Ago vii, A treatise...which will be published probably...in the season of Latter Lammas, and the Greek Kalends.


I'm fond of quaint expressions for 'a day that will never come'. Good examples include when two Sundays come together and not in a month of Sundays, as well as St Tib's Eve and the twelfth of never. Besides 'latter Lammas', the OED has now added to this list on the Greek Calends, which it explains is "humorous for Never; since the Greeks used no calends in their reckoning of time". That's donnish humour, I suppose!

At the opposite extreme, expressions meaning 'for ever' also tend to have an unearthly ring to them, like 'forever and a day' or the fantastic phrase 'world without end', which is such a wonderful translation of in saecula saeculorum. I wrote about some alternative earlier English forms of that expression in one of my psalm translations posts: through worlds of worlds, in all the worlds, from world into world... But world without end is still the best. Although it's most familiar from the doxologies of the Book of Common Prayer, it also makes me think of Shakespeare's Sonnet 57: "nor dare I chide the world-without-end hour / Whilst I, my sovereign, watch the clock for you..." Waiting for a lover who would only come, perhaps, at latter Lammas.

And perhaps even better is the concept of 'lammas growth':

Lammas growth, also called Lammas leaves, Lammas flush, second shoots, or summer shoots, is a season of renewed growth in some trees in temperate regions put on in July and August (if in the northern hemisphere, January and February if in the southern), that is around Lammas day, August 1, which is the Celtic [sic!] harvest festival.

I don't know why, but that really caught my imagination. A flush of fresh growth in a mature tree - isn't there a poem waiting to be written in that? 'Lammas leaves', you could call it - or perhaps 'second shoots'. But each of those phrases would make a wonderful title. 'Lammas flush'. Beautiful.
Posted by Clerk of Oxford at 10:29 am