This extract from the medieval spiritual guide Ancrene Wisse follows directly on from one I posted before, an extended analogy of Christ's courtship of the soul as a king wooing a noble lady whose castle is besieged by enemies. The section which follows, which draws out parallels between Christ's body and a knight's shield, is based on St Bernard's commentary on Psalm 91.

In Middle English (from here): 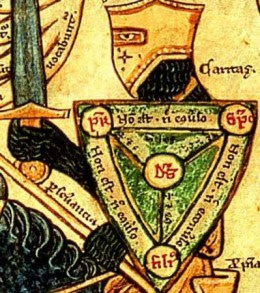 This king is Jesus, the Son of God, who in this way wooed our souls, which devils had besieged; and, like a noble suitor, after many messengers and many acts of kindness he came himself to give proof of his love, and showed by his chivalry that he was worthy to be loved, as knights used to do in the old days. He fought in a tournament, and for the love of his beloved had a shield in the battle, like a valiant knight, pierced on either side. His shield, which concealed his Godhead, was his precious body that was spread on the cross: broad like a shield at the top across his outstretched arms, and narrow beneath, since one foot, it is thought, was placed over the other. The fact that a shield does not have sides signifies that his disciples, who should have stood by him and been his sides, all fled from him and left him like strangers: as the Gospel says, 'all the disciples forsook him and fled'.

This shield is given to us to guard against all temptations, as Jeremiah bears witness: 'You will give them a covered heart'. Not only does this shield guard us from all evils, but it does still more: 'it crowns us in heaven with favour as with a shield'. 'Lord', David says, 'you will have us crowned with the shield of your goodwill' – the 'shield of goodwill', he says, because Christ willingly suffered all that he suffered. Thus Isaiah: 'He was offered because it was his own will.'

But, Lord! you say - could he not have redeemed us with less pain? Yes, indeed, very easily; but he did not want to. Why not? In order to deprive us of any excuse for not showing him the love which he bought at such a high price. People buy for a low price things they do not care about. He bought us with his heart’s blood – there never was a dearer price! – in order to attract our love towards him, which cost him so heavily.

A shield is made up of three things, the wood, the leather, and the paint. This shield was too: the wood of the cross, the skin of God’s body, and the paint of the red blood which coloured it so beautifully.

Furthermore, there is a third reason. After a brave knight’s death, his shield is hung up high in the church in his memory. This shield is too: that is, the crucifix is placed in the church in a place where it can most easily be seen, so that one may thereby remember the feat of arms which Jesus Christ performed on the cross. His beloved can see there how he bought her love: he allowed his shield to be pierced, his side to be opened to show her his heart, to show her openly how he loved her inwardly, and to draw her heart towards him.